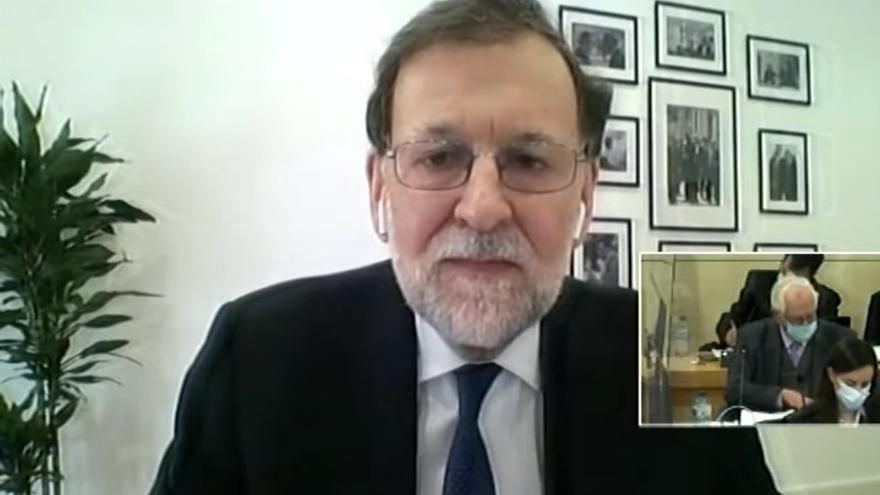 “The court had valid and sufficient proof of charge to conclude the existence of a ‘Box B’ or ‘extra-accounting’ accounting of the PP”. This is how the accounting parallel to the official one is defined by the ruling of the Supreme Court that confirmed that the conservative formation had profited from the Gürtel plot. But for José María Aznar and Mariano Rajoy, presidents of the Popular Party for almost three decades – between 1990 and 2018 – that irregular financing never existed and salaries were never charged in black. This has been reiterated by both this Wednesday in their statements as witnesses – with the obligation to tell the truth and to answer all the questions of the parties, therefore – in the trial for the use that the Popular Party made of the money from that box B .

The first to appear was Aznar, who had to answer for the first time in court about the irregular financing of the training he directed between 1990 and 2004. “I have never received any salary supplement, all amounts are transparent and all are declared in my personal income tax returns. I have never received any bonus, “he said at the beginning of his interrogation to questions from the lawyer of one of the popular accusations, Mariano Benítez de Lugo. “I don’t know what the others did. I don’t know what my successors did and I’m not interested,” he insisted shortly after.

Aznar also denied the former PP deputy Jaime Ignacio del Burgo, who in the previous one also testified as a witness and said that Aznar had given him authorization to make “cash” deliveries worth 3,900,000 pesetas to Calixto Ayesa as “compensation” when he joined the Government of Navarra as Minister of Health. These deliveries, recognized by Del Burgo, are collected in the handwritten notebooks in which Luis Bárcenas and Álvaro Lapuerta reflected dozens of opaque inflows and outflows of money between 1990 and 2008. “I have not given authorization to financially compensate anyone,” he said. Aznar, who attributed the statement by former deputy Del Burgo to some confusion in his memory of the “many meetings” they held.

Likewise, Aznar denied being the recipient of the payments under the inscription “JM” that Bárcenas’ papers collect. “Those initials of JM were yours?”, The lawyer Benítez de Lugo asked him. “No sir. I have not received any amount, nor do I respond to any consideration that may affect those annotations if those annotations are true, “he replied. Under this heading are alleged deliveries in the years 1990, 1997 and 1998 for a value of 8.5 million pesetas (51,266 euros) that Bárcenas has never wanted to clarify if they referred to the former president of the Government to another person.

Aznar, who appeared from his home and wearing a mask even though he was alone in an office, at times displayed his haughty character and had a run-in with the lawyers, whom he reminded who his clients were. “You are Puigdemont’s lawyer,” he told the lawyer for one of the popular accusations, Gonzalo Boye. After this comment, he was reprimanded by the president of the court, magistrate José Antonio Mora, who told him that this question was not of interest and that he would stick to the questions that were asked. “I have the status of a witness, not a chattel,” he had previously told the lawyer Virgilio Latorre, when he reminded him that he already knew that he was not going to comment on the interventions of other witnesses or defendants.

“False of all falsehood”

After Aznar’s interrogation, that of Rajoy began, who also denied having received bonuses and the veracity of the ex-treasurer’s annotations. Regarding the statement in the trial that Bárcenas made about the destruction of the last sheet of his papers in Rajoy’s office by him, the former president of the PP and the Government affirmed: “He has not given me any B accounts because the first The time in my life that I saw the papers was published in a national newspaper on January 31, 2013. It is metaphysically impossible, therefore, that I have been able to destroy those papers ”.

Unlike his predecessor, Rajoy did show his face for other conservative leaders. “Bárcenas kept money there [en una supuesta caja fuerte] and in other places, but the leaders of the PP and I, no ”, he assured. “That is a statement that the Justice will say,” the lawyer who was questioning him at the time, Juan Moreno, from Izquierda Unida, replied then.

After the questions of the popular accusations, Rajoy had no choice but to acknowledge that there were some people – former deputies Jaime Ignacio de Burgo and Eugenio Nasarre, for example – who had claimed to have received amounts that appeared in Bárcenas’ papers, if He well insisted that “more than 95% of the people who appear in Bárcenas’ papers have said that what they refer to is false”, as he said was his case.

According to Bárcenas’ annotations – in which he is cited as “Mariano”, “MR”, “Mariano Rajoy” or “M. Raj” – he would have received bonuses throughout his time as minister except in 1996. In court, he denied repeatedly having charged in black the more than 300,000 euros that appear in his name between 1997 and 2008 in those handwritten annotations. With money from that box, B would also have paid for her wardrobe change. The papers collect more than 20,000 euros in payments for suits, shirts and ties for him. “Everything is false of all falsehood,” he said on several occasions about those notes.

Rajoy, who was evicted from Moncloa after the sentence that credited box B of the party in which he held positions of responsibility since 1993, also denied on several occasions during his interrogation the existence of that parallel accounting. “Box B of the PP does not exist, it will be the papers of Bárcenas,” he said in an argument similar to the one used the day before by whoever was his number two, María Dolores de Cospedal. “I have been in the PP for 40 years and there is no one who said anything. Look at the people who have gone through this trial … there is no box B, only Bárcenas’ papers that we do not know when he did them, or according to what criteria or with what object or purpose, “he said.

“Don’t go on around, the papers are false,” he even told the lawyer Virgilio Latorre when he was asking him about those manuscripts in which Bárcenas reflected for years alleged inflows and outflows of money. “He is using some documents that I have said are a lie… And from there he can make whatever reasoning he wants but they have no value. What the papers say has no value. Do not continue there, they are false, “he snapped. After this comment, the president of the court reprimanded the former president, reminding him that he was in a judicial process and that the lawyer had the right to contrast those papers and the statements that have been made in recent sessions. “He is entitled to ask him the questions he asks him,” said the magistrate.