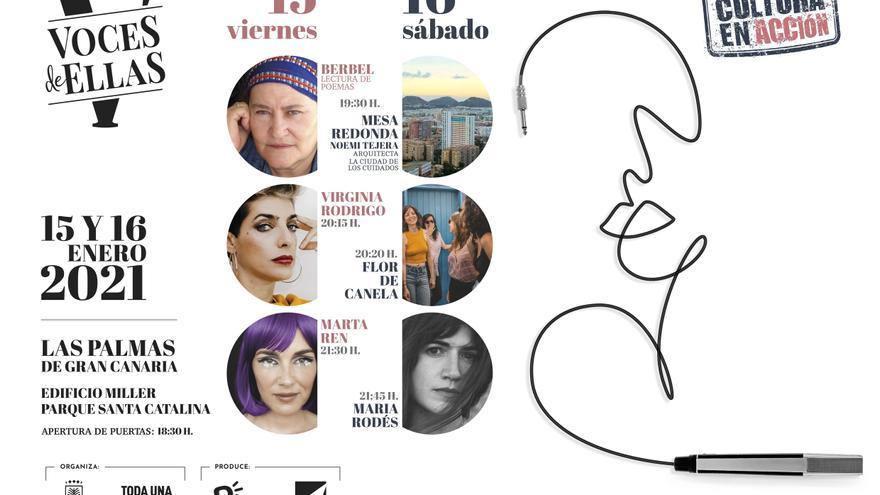 The woman will be the absolute protagonist of Miller next January 15 and 16 thanks to the cycle “Voices of Them” a commitment from DD & Company Producciones that saw the light twelve years ago in Valladolid and that now reaches Las Palmas de Gran Canaria thanks to the efforts of the Culture area of ​​the City Council of the capital of Gran Canaria.

“Voces de Ellas” will offer six different appointments, three per day, where the talent of prominent leaders from the world of culture will be highlighted, from the poet Berbel to the interpreter Maria Rodés, a spectacular closing for a program that, in addition It will have had the music of the Madrilenian Virginia Rodrigo, the Portuguese singer Marta Ren and the pop band Flor de Canela, as well as a round table by the architect Noemí Tejera.

Tickets for the different sections of the event will be available to the public, at 8 euros each location, from January 4 on entrees.es.

According to the producer, “« Voces de Ellas »was born with the aim of promoting interest in female music and voices, presenting women with a unique voice to the public, without the need to anchor themselves in any specific style”. Thus, continuing with the statements offered by DD & Company Productions, “this project will offer the resident public a wide stylistic offer that highlights the voices of these very special and unique artists.

Berbel will be in charge of opening the cycle on January 15 at 7:30 p.m., with a reading of a selection of poems. The Spanish poet, narrator, painter, illustrator and photographer (Cartagena, March 26, 1950) is an example of activism and militancy in favor of women. Among many other companies, María del Pino Marrero Berbel managed to build her project ‘El club de las poetas muertas’, a literary forum that recovered the voices of 92 Canarian writers from the 15th to the 20th century, at the Poeta Domingo Rivero Museum, in 2013.

Shortly after, at 8:15 p.m., Miller’s tables will be occupied by the composer and multi-instrumentalist Virginia Rodrigo who will present his second work: Intrusive, an energetic album that plays with urban, electronic and pop music at the time of transferring lyrics loaded with irony and poetry. The Madrilenian, a regular at festivals and emblematic venues of the state capital, will offer a show in which, as is customary in her, she will spin monologues, humor and theatricality through music, exposing her particular narrative universe based on voice, guitar, percussion and programming.

Marta Ren, the diva of soul in Portugal, it will close on the first night of the cycle from 9:30 p.m. Ren is one of the leading voices of the Portuguese scene since the 90s, first as a member of the band funk The Bombazines, later as a member of the group of versions of classics of the soul and the funk, The Funkalicious, and finally solo, through a career that thrives on the authentic soul from the 60s where he has made his mark: a warm and vibrant voice. Marta Ren will say goodbye to Friday night with songs from her debut solo album: Stop Look And Listen, a true reference on the European scene.

On Saturday, January 16, starting at 7:30 p.m., Miller will say goodbye to “Voces de Ellas” with a program that includes a round table offered by the architect Naomi Tejera. With her proposal “The city of care” will come the opportunity to reflect on urban regeneration from an integrating point of view, the watchword of this professional with a marked commitment to the democratization of public space and care for the environment, as well as the promotion of new city models, seen from a gender perspective. He will be accompanied in this debate by the architects Flora Pescador, Eva Llorca and Tamara Febles.

The music will play again in the Santa Catalina park room at 8:20 p.m., with the concert of Cinnamon Flower, a band that adds the solvency of four composers and instrumentalists: Marta Bautista (electric bass, double bass and backing vocals), Paula Vegas (piano, synthesizer and backing vocals), Xerach Peñate (drums, percussion and backing vocals) and Núria Balaguer (voice). Together they have presented a first album produced by Juanma Latorre (composer and guitarist of Vetusta Morla) and are currently developing their second EP.

The spectacular closing of the cycle, on January 16 at 9:45 p.m., will be carried out by Maria Rodés and his extraordinary album Lilith inspired by the world of witches, the legends that protect it and the connotations that accompany it.

Creative freedom returns to meet in her fifth published work, an album widely praised by expert critics who continue to enjoy each new step of the versatile singer from Barcelona. With Lilith, Rodés makes it clear that he does not stick to corsets, he questions the established and turns against any type of yoke.

After surprising with his appropriation of the genre in Maria Sings Copla (Chesapik, 2014), captivate with the publication of the book Sleep (Alpha Decay, 2015), return to her role as a singer-songwriter in Ecliptic (Satellite K, 2018) and achieve great success with the Estrella Damm campaign (“Alma I / # mediterráneamente”), arrives in Las Palmas de Gran Canaria with a delicate project that pays tribute to free and non-judgmental women.