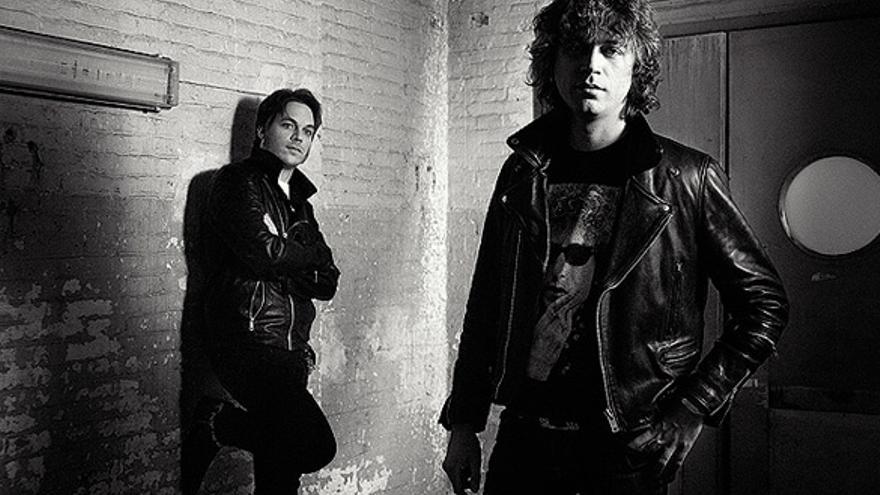 Things have changed a lot since the late 90s, when Ovidi Tormo and his brother Álvaro started to set up rock bands. The nickname “Cigars” —for their blond hair and slim complexion— came to them when they were kids, but there were still years for the Z to arrive. The Zigars they have been conquering positions. By stepping on a lot of stage, they have earned a status that allows them to invite colleagues such as Fito, Carlos Tarque, Leiva, Ariel Rot, Aurora García or their producer, guitarist Carlos Raya to the stage. To immortalize the two full-lengths that starred at the Price Circus, the Valencians rescue the title of one of their songs to baptize their new release: ¿What the hell am I doing here? Direct from Madrid.

Assuming strictly that rock ‘n’ roll style manual that starts with Chuck Berry, owes a lot to The Rolling Stones and brings to mind bands like Tequila or Burning, Los Zigarros will play at La Riviera (Madrid) on 26 December to present your new CD / DVD. Ovidi, singer, guitarist and composer of the band, tells elDiario.es by phone the reason for being of an album recorded with friends and that it is a celebration of rock ‘n’ roll, even in times of pandemic.

What does it feel like to go out on stage at the Price circus, see that it is full and know that what happens there will be immortalized?

That was very strong. The place was scary, brutal. We had never recorded a DVD. We also record with idols that we admire a lot and with whom we have grown up like Fito, Tarque or Ariel Rot. Also with friends that we have met along the way, such as Leiva, Ángel Vera or Aurora García. But hey, I don’t remember it as something especially stressful, it was all very natural. We had been on a very powerful tour for a year playing that repertoire. In rehearsals, the collaborators’ songs fitted in very well. In the end, within the importance it had, we were able to enjoy it, which was the important thing.

Do you remember your first concerts?

Perfectly. The first was in Madrid at the Moby Dick room. It was a presentation for the media. I remember that some of the same people came who have now recorded the DVD with us, but we still didn’t know each other. Fito, Quique González … a lot of people were there to see the new rock group that Universal had signed, which was a bit of a promise and I don’t know what and I don’t know which one. But there we were still very chickens and when I imagine that moment, I am ashamed …! Now the band is a mega cannon. At that moment, everything was much more innocent.

How did the collaborations with Leiva, Fito, Tarque and others come about??

What we wanted was to collaborate with people with whom we had a relationship. We did not want to pull the phone and call someone with whom we never met. That was the premise. It always has been, from day one.

By being with Universal we have always had the possibility to collaborate with a lot of famous people, let’s say. But we always said no. We made three albums by ourselves, without any kind of collaboration to try to find our site by our own efforts. Until it was time to say “damn, let’s have a treat and burn a DVD.” There, we call our friends: Fito, who is a love, the best person; Tarque, who is from our gang in town; Leiva, with whom we share everything and we have the Grand Canyon version band; Carlos Raya, who is the fifth Zigarro and producer; Ariel Rot, who is a friend and invited us to record a couple of songs for his latest album; Aurora, who is a friend and has sung many songs with us; and Ángel, who has played the harmonica with me for 15 years. Everyone is very close. What we wanted was that: to celebrate rock ‘n’ roll and the end of the first stage of Los Zigarros with friends.

When it comes to composing, is it difficult to write something new without leaving rock ‘n’ roll?

Rock as an art form has been invented for 60 years; what is new are the approaches to it. The songs can be very similar, you can dress them or approach them in many ways, but deep down a song is always a song: it begins, verse, chorus, solo and ends. In that framework you have to do something. It is about contributing what is yours and the only thing different that you can contribute is what you have, which the other does not have. It is like that in songs and in life. I always compare music with food: we all know what rice can be combined with, but the difference is to do it your way and make it good.

Have you ever had a moment in your career where you really wondered “What the hell am I doing here? “

It is a question that you could ask yourself at any time in your life. I do it continuously. We gave the album that title mainly because my brother and I, who have always followed the path of music and rock ‘n’ roll, we remembered when we were in our room listening to Nirvana and everything was very against it. And suddenly, 25 years later, we see Los Zigarros triumphing on stage accompanied by very important people. At that moment, you ask yourself: what the hell am I doing here? It’s very psychedelic, very strong to think about it.

The disk boots with Turn off the radioDo you feel that the media doesn’t take rock bands into account?

We feel that the big media don’t take into account culture in general. I believe that the radio should be a loudspeaker of what is happening in the country, the city and the people. That should be your goal.

When they ask me ‘how is rock’ n ‘roll in this country?’, I say that rock ‘n’ roll is always good. We have been rehearsing in industrial venues our entire lives and they are always full of rock ‘n’ roll bands. What happens is that the big media don’t even fucking pay attention to them. There are almost no music programs on television: Buenafuente is here, who has been supporting music all her life, The muse hour or A country to listen to, by Ariel Rot. But you no longer see a guitar solo on TV or hardly any musicians, with very few exceptions. The mass media are rubbish, that’s obvious and everyone knows it. They do not reflect reality. For example, in this country we have extraordinary hip hop that is absolutely underground. That’s a crime, I can’t understand it. In the US, France, or England, music is a huge industry and here even flamenco is ignored.

How does a band survive in times of pandemic without live shows?

It depends on the band, of course. In our team, of which there are nine of us, there are people who have had to make a living outside of the musical world. My brother and I, for example, have cover bands and we play in bars. Now it seems that everything is normalizing a bit and that we can play in 2021, but the situation is not very good, really.

The management they have done with our sector seems terrifying to me. The other day we went to play in the Canaries, the only concert we have given since January, and we followed the protocol to the letter. It’s funny, because there was a shopping center right in front and it was very crowded. Obviously no one can beat Zara or Mango, but it is very shameless that we have not been able to work for a year and the shopping center is as if nothing. It’s a bit of a bitch, really.

What measure do you think could have been taken to make you feel more supported?

For example, concerts can be done in another way. It is very simple. They do not have to be at 12 at night and drinking drinks. At the Canarias auditorium, we played at 9:00 p.m., we left at 10:30 p.m. and no one was infected there, I can assure you. This concert model could have been applied to other cities, but politicians are needed to think of alternatives. The easy thing is to say ‘nothing can be done, everything closed’. The world of culture is being 100% ignored.