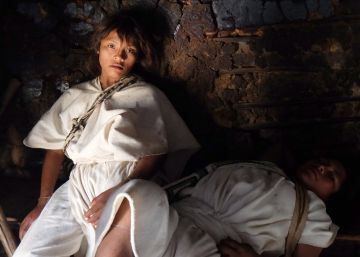 The Sierra Nevada de Santa Marta, in northern Colombia, is not only a reserve of some 17,000 square kilometers capable of containing all thermal floors. It is also the place where, according to the indigenous communities who inhabit it, the human family began. According to the worldview of the Arhuacos, Kankuamo, Wiwas and Koguis, the Sierra is the father and mother of humanity. There are older brothers, guardians of nature; and younger brothers, we, the non-indigenous who have not understood the importance of protecting it.

The Arhuacos are now the protagonists The younger brother, A program broadcasted through TeleCaribe, the public channel of Colombian Caribbean, one of the very few realities in the whole world that tells the life of an indigenous community. However, it is a reality in the strict sense of the format, in which 14 non-indigenous city dwellers live for two weeks in two villages of the Sierra Nevada under the laws of this millenary community. A program with which they seek to generate awareness of nature and explain their worldview.

"The younger brothers commit many barbarities and we must be vigilant. When we talk about conserving, caring and protecting it is not because we thought of it, but because our mother left us the responsibility of telling the younger brothers that the issue of coal, of mining exploitation, threatens humanity. That's why we decided to do the reality so they could come and listen to the elder and make an alliance where we can protect the Sierra, "he explains. one of the protagonists, the Arhuaco indigenous José Raúl Torres.

It is not a program where Indigenous are invited; but on the contrary, those who define the tests and the approach. Their silences, their own reflection times, meant a challenge for the production team of the program but were, at the same time, their greatest success.

"I never faced a project like that. The challenge was to achieve a balance in the structure of reality and at the same time that his message was clear. It was not easy but it was very beautiful. They wanted to be recognized as the guardians, as a wise people that seeks to guarantee the balance of the environment, "says the director, Miguel Mendoza, who often had to write the scripts during the filming.

The idea of reality He had a previous investigation of almost a year. As the indigenous leader says, the concern of his community for teaching his legacy emerged. The Indians asked that the participating couples not know each other and that they should be willing "to divest themselves of everything they have learned in their lives to live under Arhuaco time".

The 14 contestants, professionals in different areas, face tests and riddles that are related to the central elements of the indigenous community. In one of them they had to make fire. But whoever made it faster did not win, but whoever discovered that in this community the fire is always in the center of the houses, because it means unity of the family, In another, they had the mission of planting yucca and banana but following the precepts that it is the woman who puts the seed to germinate.

"They also meditated, sowed their thoughts in cotton, learned to splice a house. Each one was left a message for their lives, "added the director of the reality who worked with the producer Lee Morales and a team of 50 people.

Every night, under the leadership of Mama Camilo Izquierdo, an indigenous authority who speaks to them in the Arhuaco language, we define which couples follow and which one has to "take a path back". Thus, those who remain, try to win the place of the younger brother who advances spiritually and understands the legacy of the Sierra.

Revealed the title of the last Jurassic World movie