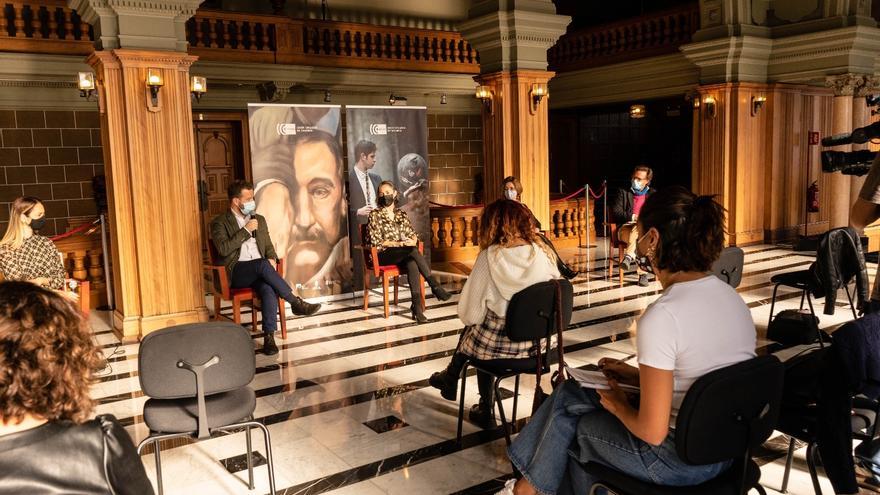 The Young Canary Orchestra (JOCAN) returns to the stages of Pérez Galdós Theater the next Monday, January 4 at 7:00 p.m. to meet your appointment New Year with the audience. On this occasion, the repertoire includes the premiere of the play ‘Galdosiana‘ commissioned to the composer from Gran Canaria Laura vega, an initiative that is part of the commemorative acts of the writer’s centenary and that will premiere precisely on January 4, the same day that he died one hundred and one years ago. The program is completed with the Symphony No. 7 by Beethoven, one of Benito Pérez Galdós’ favorite musicians. Days before this concert, the piece can be heard on January 1 in Tenerife and on January 3, in Fuerteventura.

The Young Orchestra of the Canary Islands is a group made up of music students in their last phase of their career or recent graduates that returns with more enthusiasm than ever, after seeing how the health crisis forced to cancel several of the meetings scheduled this year. The public will be able to enjoy again the good work of JOCAN, in three concerts in which, in addition to the work dedicated to Galdós, they will perform Beethoven’s Seventh Symphony, in a sort of ‘encounter’ between these two great geniuses. Both Encarna Galván and Guacimara Medina agreed on the importance of premiere a symphonic work inspired by Galdós on the same day that his death is remembered, and in the city and island where he was born. Tilman Kuttenkeuler, also added, the interest that an orchestra of young performers have in being able to count on the composer herself when facing her work for the first time.

The tour, organized by the Department of Culture of the Government of the Canary Islands, will begin on Friday, January 1 at the Auditorio de Tenerife, scenario in which JOCAN performs for the first time. On Sunday 3 they will repeat at the Training and Congress Palace of Fuerteventura and the Monday 4th at the Pérez Galdós Theater, in Gran Canaria, in a concert that will also be recorded by Televisión Canaria. The three sessions will begin at 7:00 p.m., except in Tenerife, which is earlier at 6:00 p.m. The Deputy Minister of Culture of the Government of the Canary Islands, Juan Márquez, explained that the activity of JOCAN is resumed “with great enthusiasm in a Galdosian context. We really want to see our faces again and that the public can enjoy it too ”.

The price to enjoy these concerts will be de 8 euros in the two capital islands and 4 euros, in Fuerteventura. Likewise, a special rate for students and unemployed that amounts to 3 euros in Tenerife and Gran Canaria, and 2 euros in Fuerteventura. Tickets can be purchased on the usual platforms of these stages and for the Pérez Galdós Theater concert in www.teatroperezgaldos.es and at the Theater box office, from 10:00 a.m. to 2:00 p.m., Monday to Friday, and at the Alfredo Kraus Auditorium, from 4:00 p.m. to 9:00 p.m., also Monday to Friday.

JOCAN will act in symphonic format, but adapted to what the health crisis requires, so only 48 of the more than 150 musicians that make it up will be on stage, all of them under the baton of Vicent Alberola, conductor with extensive experience leading young orchestras. As of December 26, the meeting between the members will already take place. A meeting, the eleventh since its creation in 2016, whose organization has not been without difficulties due to the current situation, taking into account that many of the interpreters who participate travel to the Canary Islands from different parts of the planet where they are studying their latest studies.

During the days prior to the concerts, they will receive classes and training sessions by prestigious musicians recognized both on the national and international scene, which will serve to face the programmed repertoire. All this also following a strict protocol that contemplates the rules dictated by the health authorities.

The Galdosian work of Laura Vega

Galdosiana for orchestra was born thanks to the commission between the Youth Orchestra of the Canary Islands and the National Orchestra of Spain as a tribute to Benito Pérez Galdós on the centenary of his death. After its premiere in the Canary Islands by JOCAN, the national group will be in charge of interpreting it before the Madrid public within its 2021 program.

For the composition of this work, Laura Vega has been inspired more by Galdós as a man than in his artistic production, more in his intimate words than in his literary discourse. According to the Canarian composer, “the correspondence addressed to her lovers and, specifically, the letters written to the last love of her life Teodosia Gandarias, have served as an excuse to discover, imagine and interpret the feeling of the human being who was and not the of genius as well as to trace my musical work ”.

In his opinion, this intimate correspondence reveals his human dimension and brings us closer to the close and affectionate man who could not live without relating to women. “And it is that vision of love that I have tried to capture with sounds in Galdosiana, trying to reflect the possible feelings of nostalgia and sadness of the young Galdós who leaves his native land behind wounded by a frustrated youthful love and the earthly, suffering, dedicated and passionate Galdós ”.

The Young Orchestra of the Canary Islands, a project that has been developed since its inception under the artistic direction of Víctor Pablo Pérez, has so far performed a total of 53 concerts, most of them on tours of different stages in the Islands, but also in various of the most important auditoriums in China, in a tour organized by a producer from the Asian country.

Every year, the formation integrates new members selected by public announcement into its ranks. Some of the musicians chosen this year are taking part in these new New Year’s concerts, and a choir will soon join the group that will allow them to expand their repertoire. This last process is nearing completion, so it will be presented to the public in future performances.