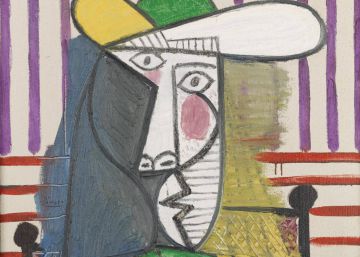 Last New Year’s Eve transcended the news that three days earlier, on December 28, 2019, a 20-year-old had shattered a picasso valued at more than 23.5 million euros. The picture, titled Bust of a woman, hung in the halls of the Tate Modern London, where the attack was perpetrated. Little more is known about the damage caused to the painting, a portrait of the artist Dora Maar, lover of the Malaga painter, made in Paris in 1944, during the last months of the Nazi occupation. Yes, however, new information about the attacker, which had already been identified with the name of Shakeel Ryan Massey. As the newspaper has published The Opinion of Murcia, the individual, of Anglo-Indian origin, is a neighbor of the municipality of San Javier, Murcia, where he attended the Bachelor of Plastic Arts at the Ruiz de Alda Institute. Based in the region for years, currently, according to the same source, he was studying at the university in Cartagena. This newspaper has contacted the London Metropolitan Police, which has not been able to confirm the origin of the man beyond his residence in the London neighborhood of Ealing.

Massey, who was arrested immediately after the incident, will appear on January 30 at a pretrial hearing to be held at the Camberwell Green courts in the British capital. Until then he will remain in custody, since he has been denied bail. In accordance with The Opinion of Murcia, the young man left one handwritten note posted on their social networks that read: “You will think that it is impulsive and out of nowhere, but it is more than three years of planning. I am sorry I did not say goodbye to many of you, those of my people, Salinas, Larios, Pablo Octopus … Half of you would have killed me. I don’t think it will be one of the best of our times, but the most prolific, and I hope to return in a couple of years having achieved everything you thought I was able to achieve and more. ” The text, signed as “El indiako d’el Mirador” [una pedanía de San Javier] He adds that “if you want context, look (sic) news from @Tate (art museum)”, and concludes: “Long live Murcia and live El Mirador”.

In a reportage published by the newspaper online The Spanish, an unidentified teacher of the Ruiz de Alda Institute says that Massey’s conception of art “was very radical”, although in the educational center they did not expect such behavior from their former student, who finished high school studies a year ago . “We were very surprised by this behavior because a disciplinary file was never opened,” adds the same source, who points out that: “I don’t know if I had a habit for the painter Pablo Picasso. The teacher has been very surprised that he does such a barbaric thing. ” According to the same medium, the man flew in December from Spain to London and there he carried out the attack, whose causes are unknown. British newspaper The guardian He points out that Massey has said he will reject the charges against him.