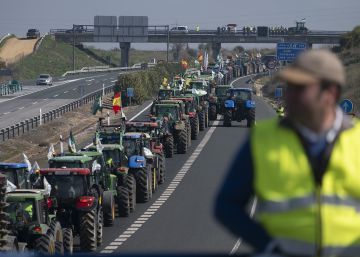 While the main concern seems to focus on the dialogue table with the Generalitat, the President of the Government has other fronts open. Many issues are pending that, in addition to Catalan, were on the electoral agenda (Budgets and taxes; housing and rentals; pensions and the announced, and therefore possible, revision of the labor reform; measures linked to the decarbonization; mobility …), many of them intertwined and almost all in scope. To them the supervening problem of the coronavirus is added, which in addition to impacting on health, it does so on economic growth.

But before this threat arrived, the discontent of the camp had exploded, and perhaps unexpectedly. Overnight a wave of protest formed that dispersed farmers from different parts of Spain who, as a symbol of claim, put on yellow vests and went out to cut the roads, largely mounted on tractors.

Car manufacturers flock to La Moncloa. The president of the Government, Pedro Sánchez, will receive this Monday the board of directors of the employers’ association of automobile manufacturers, Anfac, apparently very sensitized by the importance that it has for the economy of the country. The appointment responds to a request from the sector chaired by José Vicente de Los Mozos, concerned about the fall in sales and the unknowns that loom in environmental matters, which is why the presence of Vice President Terese Ribera is also expected along with the of Industry, Reyes Maroto.

Corredor already has homework in Red Eléctrica. Beatriz Corredor already has homework. Upon joining the board of directors of Red Eléctrica de España (REE) to be president, the results of the group corresponding to last year (718 million benefits with an increase of 1.9%) were known. But, in addition, now the task is focused on seeking industrial or financial allies to support the objectives of Hispasat, the satellite firm from which REE acquired 89% of capital last year under the presidency of Jordi Sevilla, and the subsidiary of Reintel fiber optic.

Another Puig at the head of the family business 25 years later. From father to son 25 years later in the presidency of the Family Business Institute (IEF). The father, Mariano Puig, today nonagenario, was president between 1995 and 1997. The son, Marc Puig, will be from next May until the same month of 2022. It is the first time in the 30 years of life that occurs This cricunstancia in the body that brings together the main Spanish family groups, a group that adds a large part of the GDP and Spanish employment. Mariano Puig, who in the Toledo Congress two years ago declared himself “Catalan and Spanish”, was one of the drivers of the IEF and last year he received recognition from the assembly.

When he has not yet completed the 100 days of Government and has all the aforementioned subjects in the portfolio, which are filled with the news of yellow vests and green tractors images is certainly not a good taste dish for Pedro Sanchez. For now, the Executive celebrates that the movements have been peaceful, but La Moncloa does not want to be radicalized and unless the protests are spread to other sectors, even if they wear a tie or bow tie.

He wants to avoid it anyway and it doesn’t happen like Enmanuel Macron in France in 2018 and last year. Unlike that conflict, which arose from the rise of diesel and a massive bombardment through social networks among the discontented middle classes in urban areas, it directly affects the rural world, the farmer group, and has not needed So many networks. In this case, the trigger has been the rise in the minimum interprofessional wage (SMI) agreed between the Executive, the unions and the employer, which also overlaps with the message the emptied Spain.

But the problems come from afar, from many years ago, and they do not derive from the SMI, but mainly from the prices of their products that, according to denounce, are at the same level of 20 years ago and the sale at losses. That does not prevent the dispute from being used as a throwing weapon by the right-wing parties, eager for carnaza, to attack the Government. Even the leader of the extreme right, Santiago Abascal, probably encouraged by some landlord harangues, dared to appear as a spiritual father in the first demonstration in Madrid and left scalded with a string of boos.

At this point, beyond the cuts of roads that annoy users and the ever-present interests of large landowners, the claims of agricultural producers enjoy compression. Therefore, Sanchez summoned the ministers involved to study the situation and ordered Luis Planas, minister of the branch, who directed the negotiations with the agrarian organizations, a fan in which under different acronyms the farmers of conservative and progressive nature are grouped (Asaja, Coag and UPA, mainly), to stop the revolt.

Hence the Food Chain Law that the Council of Ministers approved on Tuesday, but that does not convince as seen in the last protests. The law aims to improve prices and cover expenses. It is about preventing large stores from selling at a loss and not using these products as a claim with low prices to capture the attention of others. According to Planas, “a strengthening of the negotiating position of the producers and achieving balance in the food chain.”

Producers pursue the prohibition and penalties to sell at a loss, which is attentive to competition and is already regulated. Minimum prices cannot be distributed to distributors, but they can collect production costs in contracts and make public the identity of the companies that fail to comply. And, in addition, raise the penalties for operators who skip or don’t have contracts.

The solution of the problem can become an asset of Sánchez in a sector of conservative majority. The representatives of Podemos in the Government have also understood this. the vice president Pablo Iglesias and the Minister of Labor, Yolanda Diaz, they got underway and met with the agrarian unions even before Planas did. Among other things, they promised to lower the prices from 35 to 20 to enjoy social benefits.

Thousands of farmers, dressed in yellow vests and mounted on tractors, have gone out and continue to go on the roads in all the Spanish provinces (pictured, on the A-4 at the height of the Sevillian town of Carmona). In addition to asking for fair prices, the sector requires support to maintain the volume of aid from the common agricultural policy (CAP). According to the proposal of the European Council, this item would be reduced by 14%, something that would significantly reduce the accounts of the Spanish countryside.