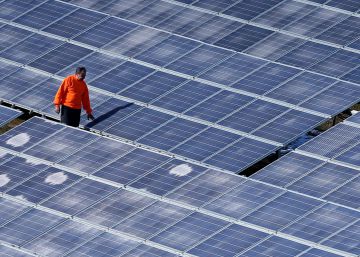 Many hours of sunshine have painted Spanish rooftops since photovoltaic energy was presented as an alternative for Spain in 1984. But after almost four decades of timid growth, only a pandemic and the resulting confinement have finally ignited the interest of households for self-consumption.

“Families have saved more money and some have decided that this savings was better on their roof than in the bank,” he says. Jose Donoso, CEO of the Spanish Photovoltaic Union (Unef), the employer’s association that represents more than 400 companies in the photovoltaic solar energy sector in the country.

According to the association, 596 MW of photovoltaic power were installed for self-consumption in Spain in 2020, 30% more than the previous year. Of these new megawatts, 19% correspond to domestic self-consumption, an unprecedented growth, according to Unef.

The panels have joined the pull of increased consumer spending on home equipment, driven by the months of lockdown and the launch of teleworking.

Savings amid the crisis

“Recent legal and regulatory modifications have made it possible to facilitate and expand the possibilities for self-consumption installations”, they say from the Institute for Diversification and Energy Saving (IDAE). But they consider that cost reduction is the biggest attraction of this form of energy. “It facilitates access to increasingly competitive offers compared to a conventional supply”, they point out.

An increasingly coveted savings, after reaching the light new highs in January what they leave an invoice increased by 13%.

The installation of photovoltaic panels represents a saving of up to 30% of the variable part of the electricity bill, according to Unef.

In fact, the installation of photovoltaic panels represents a saving of up to 30% of the variable part of the electricity bill, according to Unef. In this regard, José Donoso points out that if the fixed term of the tariff in Spain is reduced from 40%, to at least the European average (23%), a greater take-off of self-consumption in the country would be experienced.

Investing in a self-consumption system can generate a profitability of up to two digits. Donoso estimates that the savings in the electricity bill allows a return on investment in a period of between nine and ten years, in the case of domestic self-consumption facilities, while, in companies, the recovery is reduced to about four years.

Therefore, even before the outbreak of the coronavirus pandemic, photovoltaic energy was more popular among SMEs, a role challenged in 2020 by domestic self-consumption.

In addition, the price of the installations has been reduced by approximately 50% during the last five years, according to energy rate advisor Selectra, and the efficiency of the panels has improved: now less is needed to produce the same power of years ago.

The cost of the installation can vary greatly between each home, depending on the number of panels needed, how to locate them and the power that can be obtained, among other questions prior to an installation, whose useful life is calculated between 25 and 30 years. This is explained by Eduardo Albánez, energy systems consultant.

In a single-family home, the estimate for the installation of photovoltaic panels is around 3,000 euros. “The most important thing is to know the useful surface available to install the panels,” explains Albánez. In the case of neighboring communities, the calculation is not so straightforward. A building has a high energy density per square meter in consumption, but the surface available for the panels if they go on the roof is not so much ”.

Even so, more and more neighborhood communities request price comparisons on portals such as Selectra, interested in the installation of solar panels and seduced by the economic advantages of sharing the initial payment among several tenants.

The momentum had already been felt since the approval of the new self-consumption regulations in April 2019, which opened the doors to the generation of electricity in common, dumping the surplus into the grid and charging for it. To further encourage projects to take advantage of the sun, the Ministry of Ecological Transition announced in 2020 that the self-consumer will be freed from paying electricity tolls and published a Professional Guide for Self-Consumption Processing, hand in hand with IDAE.

The efforts respond to the National Integrated Energy and Climate Plan 2021-2030, in which Spain has planned to improve its energy efficiency by 39.5% by 2030 and reduce primary energy consumption from 103 million tonnes of oil equivalent (Mtoe) in 2015, to 98 Mtoe at the end of the project.

“Self-consumption has taken off in Spain in a definitive way”

“It is very important to point out everything that has been advanced in the last two years. Self-consumption has taken off in Spain in a definitive way ”, IDAE insists and ensures that the guide seeks not only to support installers to process projects correctly, but to empower citizens to make them the owners of their energy and climate decisions.

The rebates of some municipalities in the Real Estate Tax (IBI) to install self-consumption systems has been another incentive for the inclination towards photovoltaic energy, according to José Donoso. Some 50 city councils in Spain offer a discount of up to 50% during the first years after installation in homes, a measure that allows lowering the initial cost of assembly and reducing the payback time.

However, Donoso rescues some rough edges that still suffer on the path of the transition to self-consumption. This is the case of building licenses that are requested in some territories such as Asturias, Madrid and Castilla-La Mancha for photovoltaic consumption installations, a requirement that eight autonomous communities in Spain already do without. “This can delay projects for months,” warns the director.

“It is a matter of environmental awareness,” concludes Donoso, for whom domestic self-consumption is the opportunity to personally contribute to the production of clean electricity, while each euro saved shows its profitability from the roof.