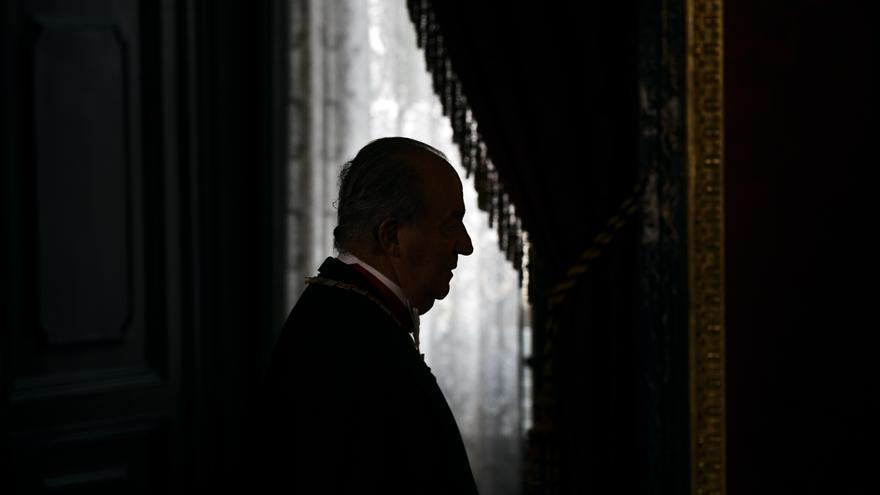 He left without apologizing, without a trace of regret, with the title of emeritus under his arm and with dozens of headlines on the national and international covers about his accounts in tax havens. He went to Abu Dhabi. According to various sources, he did not communicate the destination at that time to either the Government or Felipe VI. With his self-exile, he wanted to “contribute”, he said, so that his son could develop his constitutional function “from the tranquility and tranquility“, as if his behavior and his bulky heritage – allegedly accumulated illicitly – would not have caused enough concern in addition to a deep instability in the Head of State.

This Tuesday is the first anniversary of the departure of Juan Carlos I from Spain. 83 years, 40 as king, 58 living in La Zarzuela, at least a couple of decades of economic and extramarital scandals and 12 months already on long vacations as a luxury expatriate – with three assistants whose salaries and stay are paid by the National Heritage– on an exclusive island in the Persian Gulf from where it sends signals through third parties about its intention to return to Spain. The last time he did it was last Christmas. The emeritus threatened to return, as it was learned by some of his closest friends and without Felipe VI and the Government having knowledge of it. In La Moncloa and in Zarzuela all the alarms went off.

A return of the emeritus with three judicial investigations opened in Switzerland and the Supreme Prosecutor’s Office investigating in Spain it was not convenient, but Juan Carlos I transmitted to whoever wanted to listen to him that he felt “hurt and unjustly treated” by the institutions of his country, by his own son and by the Spanish. “He only talks about the service provided to Spain for 40 years, but never about the damage caused,” a member of the Government told elDiario.es at the time, who understood that the current and future behavior of Juan Carlos I will depend on whether “he can spend his last days worthily or die without honor. “

Since he left Spain, the Government denies having transmitted any indication to Felipe VI about the advisability or not of a hypothetical return of the emeritus, although it is aware of the damage it would cause to the Crown without the matter of where he will live being resolved beforehand, since it is not contemplated at all that he will return to what was his official residence for 40 years. What has never been hidden in the Executive is the concern raised by the deterioration caused to the institution and the wear and tear produced by the reign of Felipe VI after the accumulation of scandals and too many signs that the emeritus “has lost all contact with the reality and with the moral, ethical, political and institutional limits “. Hence, the President of the Government, Pedro Sánchez, publicly manifests his unwavering support for the Head of State and the role of the current monarch every time he has occasion. “There is no higher political price than the one that Juan Carlos I already paid with the abdication for all his mistakes and Felipe VI cannot be attributed the past of his predecessor as head of state,” they add in La Moncloa, from where they insist a year later, in that they do not expect an early return of the emeritus that, in any case, would be a decision that corresponds exclusively to the Royal Household. Whatever it was, they add, the Government “will only accompany Felipe VI” because it will be the head of state “who decides.”

The truth is that, every time there are rumors about a possible return, news appears in the Spanish press about a new opaque account, a tax irregularity, an investigation by the Swiss prosecutor’s office or a statement from Corinna Larsen, the lover who a few weeks ago He filed a lawsuit in London for threats to “not reveal state secrets” against Juan Carlos I and the CNI and requested a restraining order against the emeritus and the personnel of the secret services.

In August 2020, Juan Carlos I presented his departure as a voluntary decision when, in reality, Felipe VI and the Government had already spent months exploring formulas with which to mitigate the damage and discredit that he had caused to the institution and to the reign of his own son. The decision had been expected since a month before El País revealed that the mistress of the emeritus Corinna Larssen had declared before the Swiss prosecutor that Juan Carlos had donated 65 million euros that supposedly the King of Arabia Abdullah bin Abdulaziz had given her. Since that day there has been a trickle of information on the accounts of the former head of State in tax havens that fell like a slab on La Zarzuela and even caused the President of the Government, Pedro Sánchez, to describe these news as “disturbing and disturbing” . Several ministers also urged the head of state to make a drastic decision on his father to serve as a firewall for the institution.

Felipe VI’s father made it known through his lawyers that his departure did not imply an attempt to evade the action of Justice. At that time – and the procedure continues at the same point a year later – the Spanish Supreme Prosecutor’s Office and also that of Switzerland were investigating his accounts abroad, although no charges were against him. The Spanish Tax Agency and the Public Prosecutor’s Office that maintains three investigations into fortune have taken the same time to dive into the accounts of the former head of state for four decades than it would take to do so in the entire fiscal life of the 47 millions of Spaniards. No hurries. And that which he himself has lamented to someone close to him in recent months that there are several generations of Spaniards who will only remember him for being “the one with the elephant [en alusión a la cacería en Botswana en la que fue sorprendido, tras una caída que obligó a trasladarlo de urgencia a España, en plena crisis económica en abril de 2012], Corinna’s and the briefcase, “and not for the services rendered to democracy.

Last july The confidential revealed that the Swiss prosecutor had found a new emeritus account in the Credit Suisse entity in Geneva, and that its owner was a Panamanian company called Lactuva SA. They are, a figurehead “specialized in setting up opaque networks” that the merchant set up and that had already served the monarch to collect 100 million euros from Saudi Arabia. According to the same newspaper, the true owner of the account was a member of Juan Carlos’ family environment, who allegedly used the deposit to hide funds from the Tax Agency through the Zagatka Foundation, whose administrator is Álvaro de Orleans, the cousin of the emeritus king. The operations were ordered directly by the former head of State with the supposed objective of helping his family member financially. Álvaro de Orleans has already recognized travel payments to the previous king, some of them to visit Corinna, but he alleges that he did so because his father left the task of caring for and helping European monarchies. The Swiss Prosecutor’s Office is not so clear about this altruistic work and is investigating whether the aristocrat acts as the man with the briefcases for Juan Carlos I.

During 2021, to try to avoid possible criminal responsibilities, the father of Felipe VI has presented two tax regularizations for which it has voluntarily paid more than five million euros. The finding that there was fraud against the Treasury. The Zarzuela has never ruled on the matter and the Government only to solemnize what at this point does not seem so obvious: that justice is the same for everyone. There are different opinions about a possible return of Juan Carlos I to Spain. There are those who believe that he should return as soon as possible and that he does not deserve to spend his last years of life away from the country he served for so many years and those who defend that the Government should agree with Zarzuela without further delay on a “discreet return” and a residence ” even more discreet “where you can lead a life” close to your family and friends. And there are still those who believe that protecting the king, be it Juan Carlos I or Felipe VI, is to protect democracy. And hence the opacity and silence, not only of the life of the emeritus in Abu Dhabi in the last year, but of 40 years with too many shadows that have made the emeritus the worst adversary of Felipe VI. “Nobody [como ya ha escrito el periodista José Antonio Zarzalejos] It has caused him more moral and political damage than his father, before and after his abdication. “And it is that it will cost the Spaniards to forget that whoever preceded him on the throne dragged through the mud the name of Spain, the Crown and the your own for at least the last two decades.

Conclusion: no news of the emeritus, except to transfer that, for now, there will be no return but a visit from his daughter Elena to the Arab Emirates this first week of August so that his first anniversary of golden retirement does not happen alone. In one of the last visits, it turned out that both Elena and her sister, Cristina, had taken the opportunity to get vaccinated in that country before the Spanish Health Department gave them their turn.