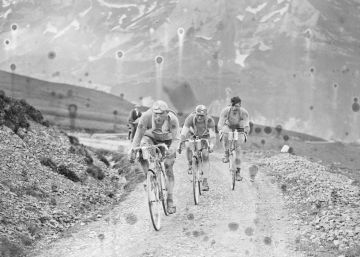 The day that the Tour of 1929 ended, Henri Desgrange, his boss, was a dejected man. "We have let a corpse win," he said. He was referring to the victory of the Belgian Maurice De Waele, and to the commercial interests of his bicycle brand, Alcyon-Dunlop, who had done everything possible to get him to Paris with the yellow jersey. "Sportingly, the Tour has not had any interest; ethically it has been abject. " The skipper was sent to the stage of July 20, between Grenoble and Evian, with the Galibier in the middle, and in which runners who ran for the French brand blocked the race to prevent De Waele from losing the lead. He was sick, he had fainted before leaving. Alcyon got the flag to be delayed an hour so that the Belgian could get on the bike, which was almost dragged. "He could not stand up," the journalist assured. Le Petit Parisien. During the first four hours, the cyclists of his team were placed in head to the full width of the road so that nobody could try an adventure. If anyone did, they came for him. De Waele arrived 15 minutes from the winner, but he kept the yellow.

Two days later he was still sick. When Benoit Faure attacked and the leader lost 200 meters, Rebry remained at his side, supporting him, while Marcel Bidot started for Faure to reproach him: "What are you trying to prove?"

De Waele won a strange Tour, with less expectation than in previous years, and lived unusual moments such as the first victory of a Spanish runner, the Valencian Salvador Cardona, winner of the stage Bayona-Luchon, who had emigrated to France with He was 17 years old and could not run in Spain because he had been declared a fugitive by not showing up for military service. However, the most curious episode came in the eighth stage, between Bordeaux and Bayonne, in which three cyclists -Nicolas Frantz, André Leducq and Victor Fontan- traveled in the squad, dressed in yellow jerseys, tied in time, and without the regulation establishes no form of tie-breaking.

But Desgrange did not want another Tour like that. In September it published the novelties for 1930. The main one consisted of suppressing the equipment of marks. As the organizers announced, there would be eight Italian champions with the colors of their country, eight Belgians, eight Spaniards, eight Germans, eight French, another 40 independent cyclists who had already run in 1929 and 20 rookies.

And even more: the cyclists would take a bicycle donated by the organization to avoid the war of builders and commercial houses. "The expenses of the cyclists, their emoluments, their care, the hotels, their food, their massages, their material, all this will be paid by the organization and will be governed by the contracts that we will sign with the cyclists for the Tour exclusively". The race did not want to die of success, devoured by commercial brands. It would be a battle between countries.