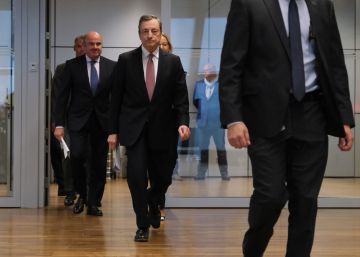 Mario Draghi Leave an ECB on a war footing. It is not the first time that the Italian has been at home opposed to his attempts to stimulate the economy. But the battle has taken unprecedented proportions after three members of the Governing Council leaked internal opposition to the press to resume the purchase of assets. In addition, the minutes of the September meeting, in which an ambitious package of measures was announced, they add more firewood to the division fire. Internal knives complicate the task of Christine Lagarde, imminent head of the eurobank.

The meeting on September 12 was especially tumultuous. In addition to announcing the return of a program that between 2015 and 2018 injected 2.6 billion euros into the economy, Draghi twisted interest rates further plunging them into negative territory and postponed the prospect of any future rate hike. It was already known that leading central bankers – such as those in France, Germany, the Netherlands and Austria – were then opposed to resuming massive debt purchases. The German advisor at the European Central Bank (ECB), Sabine Lautenschläger, submitted his resignation two weeks later in disagreement with Draghi's policy. But now, by publicly airing decisions that should be confidential, critics take a step further in the conflict.

The newspaper Financial times published on Thursday that the decision to buy back debt from November 1, for now at a rate of 20,000 million a month, was made despite opposition from the influential legal and monetary committees of the ECB. It is not the first time that the Governing Council makes a decision against its internal advisory bodies. More shocking is that three members of this organization – composed of the six members of the Executive Committee and the 19 heads of the central banks of the euro zone – filter internal dissensions to the press.

The ECB legal committee – an advisory body that issues non-binding opinions – warned Draghi that re-buying debt increases the risk of violating treaties, which prevent the agency from incurring direct funding from euro governments. The monetary committee, for its part, warned that the initial objective of the program launched in 2015 was to reduce the high rates paid by states to finance themselves. And it made no sense to take it back now, since these yields are at historic lows.

The governor of the Bank of Spain, Pablo Hernández de Cos, aligned with Draghi's thesis, intervened in the debate by accusing "misinterpretation" of the ECB mechanisms to which they hold on to the news published by the Financial times. “The internal work of the committees feeds the government bodies. It is neither strange nor unusual that at the end of the process decisions are taken far from the views expressed in the internal discussions of the committees, ”he told the Bloomberg agency.

The minutes of the September meeting, made public on Thursday, give more clues as to where the dissensions go. Draghi spoke then that the new bond acquisition program generated "a very broad consensus" and that it was not necessary to put it to a vote because it had a "clear majority" in favor. Reading what happened then suggests a much more nuanced yes.

Despite the "clear majority" of members of the Governing Council that advocate pressing the debt purchase button, some – the minutes do not specify how many – members expressed their opposition. They argued it with several ideas: it is not an efficient instrument; and if it were, it would be more appropriate to leave it for the future, in case things get worse. "The current financial conditions are very favorable," they reasoned.

It also generates a new program designed with no expiration date. The fear is that this open end may make some members claim to increase the amount of purchases as they see that the goal of bringing inflation close to 2% remains unfulfilled. "This would lead to questioning the limits of the program, necessary to ensure that monetary and fiscal policy are not confused," critics argued in September.

Less controversy resulted in the drop in the deposit facility – which went from -0.4% to -0.5%; and that some members wanted to leave intact and others to go down to -0.6% – or the idea of ​​postponing the rate hike until such time as inflation approaches the ECB's objective.

All these disagreements promise to complicate Lagarde's work from next November 1, which must choose between a conciliatory position or be clearly placed on one side. The situation is even more complicated because in the group of critics there are not only the traditional hawks contrary to Draghi's expansionist measures, but that doves as the French Benoît Coeuré and François Villeroy de Galhau have also shown their reticence. Olli Rehn, governor of the Finnish Central Bank, said that, in view of the current tensions, Lagarde will have to work to "create teams."

The extreme division into the highest organs of central banks is not exclusive to the ECB. The minutes of the last meeting of the Federal Reserve (Fed) of the USA, published on Wednesday, also show the problems they had to decide the last rate reduction. According to this document, seven Fed leaders forecast another cut this year, another five do not see it necessary, and the remaining five anticipate a rise at the end of the year.

Farewell to the top of Mario Draghi. The most powerful political leaders in Europe will pay tribute on October 28 to the man who has headed the ECB for the past eight years.

German Chancellor Angela Merkel, the presidents of France, Emmanuel Macron, Italy, Sergio Mattarella, and the European Commission, Jean-Claude Juncker, and the former managing director of the IMF and the next president of the ECB, Christine Lagarde, will speak in a event organized at the headquarters of the agency, in Frankfurt. The farewell ceremony will also help Draghi symbolize the transfer of powers to Lagarde.

Draghi has not yet announced what he will do when he leaves the Eurobank. When a candidate was sought to replace Lagarde at the head of the IMF, he discarded himself. “Of course I am honored to talk about me. But I'm not available, so there's no topic, ”he said in July. In Italy it is speculated that he could return to his country to occupy a prominent position.