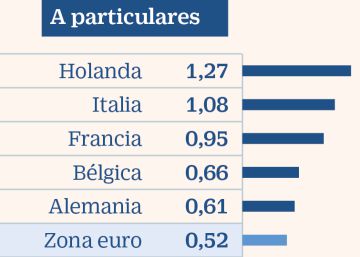 Pay for the deposit and charge for the mortgage. The era of negative rates is leading to an unthinkable and extreme scenario for savings and banking. And this unusual situation has begun to reach Spanish banks: entities have begun to charge for company deposits and there are already clients with mortgages at a variable interest rate that have been below zero and those that, although they are not paid for that negative type, they have stopped paying interest.

The phenomenon is still not widespread but it is a clear example of how the negative types are making the seams of traditional banking jump. The collapse of the 12-month Euribor, the reference to which the vast majority of mortgages in our country is reviewed, has led On negative ground, the interest on mortgage loans that were contracted more than a decade ago with differentials below 30 basis points. And the ECB's decision to reduce the deposit rate – which is applied to the bank's excess liquidity – further down to -0.5% – has finally pushed banks to charge for deposits to companies.

It is the first step in the desperate search to get some margin out of the battered banking business, which is surrounded by numerous fronts. A cost cut, with template adjustments and closing offices, which does not give much more of itself. A sovereign debt, the great risk-free asset, with minimum returns that do not contribute to financial income. A credit activity in decline due to the fear of economic contraction and in which zero rates push prices down. And a structure of saving and risk aversion, which barely shifts the money towards other financial products, such as investment funds, to which some more juice could be drawn with the collection of commissions.

With this scenario, charging customers for their deposits has finally arrived, although the big red line that does not want to cross the bank is in saving individuals. The entities do not consider penalizing the deposits of the small saver, a measure that would boost the relationship with the client and undermine the public image that is barely rebuilding the banking sector after the hard times of the financial rescue and scandals such as that of preferred shares or the ground clauses.

"We have no plan to charge individuals, freelancers or microenterprises," they say at Bankia, where they have begun to charge for company deposits. As explained in the entity, they are charged as long as they only have positions in liabilities – without being granted a loan – and are not less than at least 500,000 euros, either in deposits or demand accounts.

In CaixaBank they also recognize that they are charging for the deposits of large companies, as in Bankinter, BBVA and Sabadell. And in Santander they affirm that they are doing it with certain institutional clients. The entities agree that such a penalty will always depend on the commercial relationship with the bank and the amount of savings deposited.

Thus, a large company that does not generate business – through for example the granting of credit or the contracting of financial services – and has a large liquidity position deposited in a bank will have all the ballots to have to pay for their deposits or even for its current account liquidity. Financial sources point out that The penalty is concentrated on shorter-term deposits and can range between 0.1% and 0.4%.

The possibility that individuals get to pay for their savings in the bank is taboo. Spanish households have almost 150,000 million euros in deposits and 686,263 million euros in sight accounts, according to data from the Bank of Spain, and the trend observed in recent years is the reduction of time deposits in favor of liquidity The reduction of the remuneration of deposits to practically zero and the increasing risk aversion of Spanish families, increasingly worried about the economic slowdown, this year has accelerated the entry of money in sight accounts. Until August they register an increase of 40.183 million euros, while term deposits fall by 13.6 billion euros.

“Demand deposits have become an active refuge, there is a clear risk aversion in families. In addition, net subscriptions to investment funds are falling despite the revaluation of the market, ”explains Federica Troiano, an expert at AFI. The balance of the year at the end of September is settled with net outflows in investment funds for 88 million euros, with a cumulative average return of 5.5%, light years of the new term deposits.

“The savings structure has not changed despite the zero profitability of deposits, which has continued to fall without it moving the money to other products. Only some payroll account promotions are kept on time, ”says Antonio Gallardo, an analyst at iahorro.com. The Bankinter payroll account is one of the few survivors, offering a 5% APR the first year although for a maximum balance of 5,000 euros.

Term deposits, with no prospect of improving profitability, have disappeared even from the bank showcase. In Bankia they recognize that they do not sell them. “It is a product that at this moment does not make sense because it implies having savings without the possibility of movement, without obtaining any profitability. For that, a current account is better to use, in case you do not want to invest in any way ”, summarizes in the entity. In Santander, they recognize that the commitment to the 1,2,3 Account banished the deposit of their offer and has not returned to the showcase despite the loss of profitability of the account.

The desire of the Spaniards for the most conservative savings has allowed even Spanish banks are paying the lowest salaries between the euro zone without having scared the customer away. 0.06% for individuals and 0.16% for companies, while the average for the euro zone is 0.52% for the small saver and 0.35% for the company.

Spanish banks also have prices for new mortgages higher than the European average, of 2% compared to 1.52% in the euro zone as a whole, a difference that is largely explained by the weight of type loans permanent. Yes, it is common to all euro banks that they are not paying the client for a variable mortgage that has a negative interest. At the moment, the sector also does not contemplate the reduction of the outstanding capital as a way of reflecting that negative interest.

Medical cannabis opens up new opportunities for the Colombian economy

Have you ever lost your keys? This interests you

China’s tourism endures despite the coronavirus