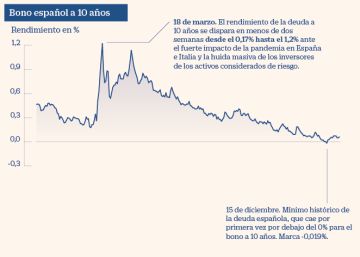 In a year in which, at one point, a third of humanity was locked up at home, for certain asset categories to trade negative is little more than a footnote. But a note that turns many of the mantras learned by economics students over decades: goods cost money and it is preferable to have 100 euros in hand than the promise of having 100 euros within a year.

As if that were not enough, the biggest economic recession in decades has coexisted with historical highs in the stock markets. In the most unreal and dystopian year of our lives, world finance has entered its own parallel universe, inverse to the current one and with different rules of the game.

The best example, perhaps, is in oil. The most traded commodity contract on the planet, West Texas-type crude at its first maturity, closed at -37 dollars on April 20. In other words, this amount could be charged in exchange for receiving a barrel of West Texas-type oil on a certain date. Paying fortunes for dubious companies, mortgaging up to the eyebrows for substandard housing, or trusting a life’s savings to virtual stamp collections are aberrations that fall within the collective experience. Paying to get rid of something called “black gold” is a quantum leap in the challenges to logic.

In the middle of the first wave of the pandemic, fuel consumption stopped, and refineries ceased their activity. Factories had been shut down, planes were grounded, and streets and highways around the world were emptied. And, faced with an unprecedented collapse in demand, there was a disagreement among producers; Faced with Russia’s refusal to cut back on the scale demanded by Saudi Arabia, Riyadh announced that it would pump at the maximum possible capacity, up to 13 million barrels a day.

The pulse was short-lived, but the market had begun to break down due to the combination of excess production and frozen demand. The barrels became a nuisance: no one needed them, they were of little value and, above all, there was no capacity to store surplus crude in the United States (producing country): fifty tankers roamed the Californian coast serving as a warehouse, with about 20 million barrels.

In the financial market, the movement was exacerbated by the proximity of expiration, which led to the undoing of the ETF positions, and by the settlement of bullish bets. But it was not a virtual negative price: specialized publications also reported negative prices in the real market, that is, between refineries and oil pipeline operators. Nor was it a generalized or long-lasting collapse: the West Texas maturity for June did not fall below $ 30 and a barrel of Brent, which is now trading above $ 50, made its lowest at 19.33.

If the negative price of oil was an extraordinary event, a black swan, the bond market is more used to rates below zero. And, in fact, one of the elements that has led to instability in oil has been the influx of investors who seek in other assets such as crude the profitability that they do not find in the classics, much less in a bond market where there is not much to scratch. The German 10-year bond has been trading negative since the beginning of 2019 and the Japanese bond has been around zero since 2016. Spain has also been charging for its two-year debt since 2016.

The difference between 2020 and the past is that negative rates have almost become the norm and have reached the longest terms. The 10-year bonds of Sweden, Switzerland, Germany, France, the Netherlands are below zero. The Spanish 10-year bond has marked a historic milestone this month at -0.019%. Berlin, in fact, charges to lend money for any term, even 30 years. And not only the states: Lufthansa, Santander, Goldman Sachs or Pirelli have debt trading negative. In total, the world has 14.2 trillion euros of debt that, if the investor buys it and waits for its maturity, loses money.

The reason for this apparent contradiction is the action of the central banks: if the ECB buys debt in the market at negative rates, an investor can buy bonds at apparently nonsensical prices because later the monetary authority will buy them back, in a trend that infects everyone the market, beyond strict purchases. The response of central banks to the pandemic has accelerated the trend.

At the end of 2019, global bonds in negative were 10 trillion. However, the historic collapse of the markets in the weeks in which the coronavirus broke out in Europe triggered the risk aversion of investors: the risk premium of peripheral Europe soared and Spain paid to issue letters for the first time in four years. But it did not take long for the central banks of the eurozone, the United States and the United Kingdom to take measures to prevent the crisis from escalating. Massive asset purchase programs led to debt trading negative from eight trillion euros in March to a record 15.2 trillion this December.

If the bond market is conditioned by central banks, the interbank is more so. The ECB launched subzero rates in 2014: If banks do not lend money, what better way to motivate them than to charge for the money that is left over. Draghi raised the bet in 2019 by putting the rate at -0.5%, applied to both the money deposited by banks in the ECB and the excess reserves of entities. The rate at which banks lend (that is, the Euribor) has approached this threshold, with scares in between.

The Euribor rose in the worst moments of the pandemic, reflecting the distrust of banks to lend money and, particularly, to entities on the periphery. A revival of 2012 that also hid an improvable calculation system. The ECB eased these tensions in a few weeks, injecting massive amounts of liquidity and chasing away the specter of the euro’s fragmentation. The indicator is now on the edge of -0.5%, a sign that, despite being contrary to what has been learned by generations of economists, is positive: banks pay to lend to each other, bad news for their accounts. But it is the price of preventing a liquidity crisis capable of drowning companies and financial institutions themselves.