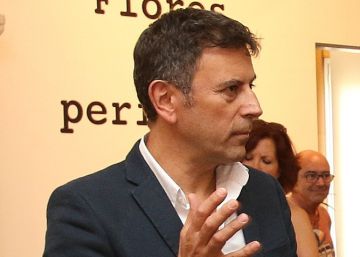 The sectorial table of contemporary art, which brings together Spanish groups of artists, collectors, curators, gallery owners, critics, museum directors, managers and teachers, announced Wednesday its "resounding rejection of the dismissal decision taken by the Ministry of Culture of the Junta de Andalucía "against Rafael Doctor Roncero, already former director of the Andalusian Center of Photography (CAF), dismissed last Monday. The Board believes that this measure "calls into question the independence and autonomy of cultural institutions, causing serious damage" to the main Andalusian center dedicated to photography, have expressed through a note.

Yolanda Romero, of the board of directors of the Association of Directors of the Contemporary Art Museum (ADACE), which brings together 37 members and is integrated into the Bureau, has told EL PAÍS by telephone that "institutions must have stability, and for years there has been consensus in the sector that museum managers should be elected in a open system".

Doctor, who was the director of Musac de León, had been with CAF for two years – he had a contract for four years – and had been named "in a public contest and by a jury of professionals, according to the Code of Good Practices", adds the text of the table. Therefore, "he has no justification for being dismissed without arguments based on a breach of his duties." Doctor, who has announced that he will appeal to the courts, was dismissed by Fernando Francés, general secretary of Cultural Innovation and Museums of the Board, after a tense two-hour meeting at the Palacio de Altamira in Seville in the presence of the Minister of Culture, Patricia del Pozo, of the Popular Party.

Romero said that Doctor has "an unblemished curriculum" and has developed "a splendid work, from the local, but going beyond, and has done a job of recovery of the Andalusian photographic heritage." When "such a change occurs, it is that we want to intervene on the programming of the CAF," Romero adds. "In Spain there are few centers dedicated to the study of photography and now it is going to be diluted in a general direction of visual arts, we are worried that it will be an example against the autonomy of other institutions".

In this line, Idoia Fernández, president of the Consortium of Spanish galleries of contemporary art, to which belong spaces of 13 autonomous communities: "From the sectorial Table we fight so that the centers are independent of political power, it is a decision that is hardly justifiable and that scares us and worries because it may be the beginning of something worse. It seems that it has been brilliant, it can not be left to the liking of whether a government likes it or not. "

The promoters of the statement emphasize that in the CAF, "despite the precariousness of resources", Doctor has increased the quality of its exhibitions "and in more than 65% the number of visitors". Highlights include samples from Norman Bethune, Cristina de Middel, Marlene Freniche, Virginia Rota and María Rosa Aránega, as well as an upcoming one about Gerda Taro and Robert Capa. Asked by EL PAÍS last Tuesday, Doctor said: "I am dismayed and very sad because here I have left my skin scarcely without support, but it is a job that I adore and that was paying off, the real cause of the cessation is my antifascist activism and animalist. " The note of the Board goes further to ensure that a measure of this draft "seriously endangers the image of Spain."

For all these reasons, the sectorial panel of Contemporary Art "requires" the Minister of Culture of Andalusia to "reconsider the unfair dismissal". Otherwise, it will "create a state of malaise and protest from most of the social and cultural sector."