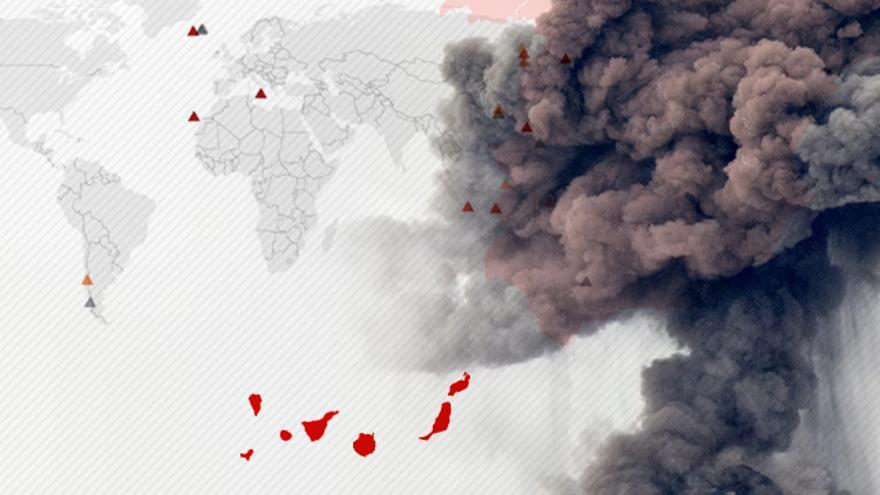 In Spain it is a rarity for a volcano to erupt, but there are parts of the world where they are more used to it. Around the globe there are about 70 eruptions per year among the 1,500 volcanoes that are considered active in the world, most of them in the so-called Ring of Fire, between America, Asia and Oceania.

But when is a volcano considered active? Can eruptions be predicted? Is volcanic activity growing in the world? We review the situation of volcanoes on the planet and some other issues that the eruption on the island of La Palma has put on the table.

A volcano is considered active when it has erupted in the last 30,000 to 40,000 years, according to Pablo J. González, a volcanic geophysicist at the Higher Center for Scientific Research (CSIC) in Tenerife, although other sources lower that figure to 10,000 years. A volcano can be active but also dormant, without activity at the moment, and these “periods of rest” can last for thousands of years. “Different magmatic systems need different periods of rest and maturation that do not have frequent eruptions”, explains González. A volcano may not erupt in 30,000 years, but do it at any time.

When there have been eruptions more than 30,000 years ago, an area is considered volcanic, but extinct, as is the case in most cases in Spain.

From this definition, it is considered that the world has about 1,500 active volcanoes (it is estimated that 1,356 have erupted at some point within these intervals, according to the Smithsonian Institution of the USA). Of them, at least 23 have done so in the last two weeks, according to data from this same center, world reference. So far this year there have been at least 70 eruptions, according to data updated to September 14 by the institution, a figure to which Etna has been added, which has returned to activity this Tuesday. Some of these volcanoes began to have eruptions before the year 2000 and, with stops, they are still spitting lava regularly.

Most of these volcanoes are in the so-called Pacific Ring of Fire, a huge area that runs along the west coast of South and North America, the east coast of Asia, Indonesia and New Zealand, an area where several tectonic plates converge.

Spain has six volcanic zones, according to the National Geographic Institute (IGN): the Canary Islands, the region of La Garroxta (Girona), Cabo de Gata (Almería), Cofrentes (Valencia), the Columbretes Islands (Castellón) and Campos de Calatrava (Real city). According to the IGN itself, “of all of them, there have only been eruptions in the last 10,000 years in Girona and the Canary Islands, and of the two places, the islands are the only ones that have dealt with eruptions in recent times.”

In fact, there are experts like González who maintain that the La Garrotxa issue “is not clear” and that more research would be necessary. In any case, the last eruption recorded before the current one on La Palma was that of the Teneguía volcano, in 1971. In 2021 there was another on the island of El Hierro, also in the Canary Islands, but it was underwater.

Each country is sovereign and responsible for monitoring its volcanoes, so it is usual that there are institutes ad hoc or entities of some kind. The geophysicist González explains that the centers of Italy and the United States have special global relevance. In addition, the Global Volcanism Program of the Museum of Natural History of the aforementioned Smithsonian Institution, in the USA, has the most complete and respected database considered active.

At the international level, there is the International Association for Volcanology and Chemistry of the Earth’s Interior (IAVCEI), a non-profit entity of the International Union of Geophysics and Geosciences. Also exists WOVO, the World Organization of Volcano Observers, that its own name indicates what it is.

Yes and no. You can, and scientists do, monitor the activity of volcanoes. Seismographs, GPS or gas and water sensors are used that can help to anticipate an eminent eruption. But it is not an exact science and eruptions are not always preceded by a great seismic activity that anticipates them, as has happened on La Palma. “In well instrumented volcanoes there is a 50% chance of hitting the eruptions”, explains González, skeptical as to the effectiveness of the forecast.

“And this percentage drops a lot as the level of instrumentalization decreases,” adds the geophysicist. In the Canary Islands it is monitored a lot, but it is not done in all the volcanoes of the world.

And there are also those who do not warn. González remembers the case of Mount Ontake, in Japan in 2014, which was so unforeseen that he caught several hikers visiting the volcano, with fatal consequences for them.

The Smithsonian Institution adds that “even with the best monitoring and interpretation (of the data) it is little possible to make reliable predictions more than a few days in advance of the eruption.”

There is no evidence for this, according to the Smithsonian Institution. In the last 30 years, the center collects, the total number of eruptions per year has fluctuated without following a clear trend. In 1991 there were 69 registered, in 1997 there were 56, in 2008 they had risen to 80 and in 2019 back to 72.

Another record, which goes back to the year 1800, does reflect a sustained annual increase in the total number of eruptions reported each year, which would have gone from 15 200 years ago to more than 70 today, although those considered large remain stable. The center itself warns that this annual increase in the total may be highly conditioned by the growing interest that volcanoes have aroused throughout history and the improvements in communications to notify eruptions over time.