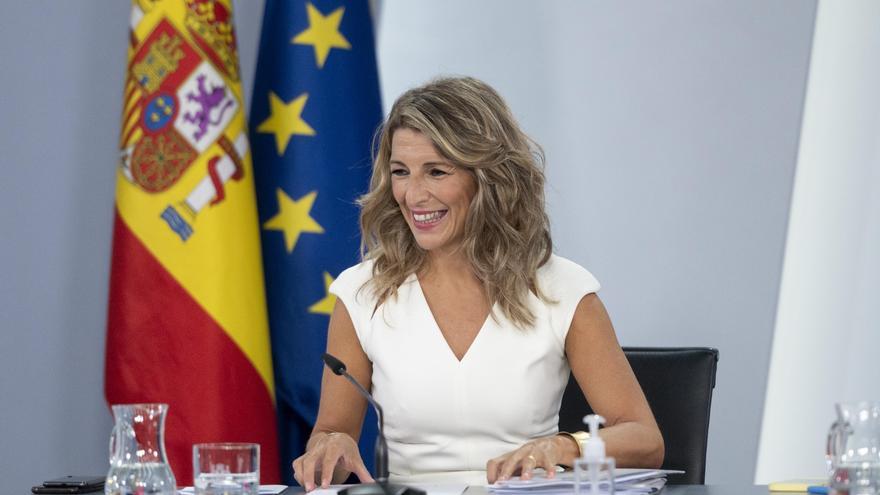 The new Spanish labor framework is key to receiving 10 billion euros from European recovery funds in the first half of 2022. The Government’s commitment, in the reform plans sent to Brussels, is that the reform would be ready before the end 2021. “The works are agile, in November they must be completed”, confirmed the Second Vice President and Minister of Labor, Yolanda Díaz, before entering the Council of European Ministers of Employment and Social Policy (EPSCO), which is held this Friday in Luxembourg.

“It is a fundamental reform, one of the most important in our country,” Díaz continued: “The commitment is to have the labor reform published in the Official State Gazette before December 31. The work is fast, agile, and in a timely manner. The maximum deadline, around the month of November, must be completed. This is the obligation we have. We have only left the Employment Law for the first quarter of 2022, but the central elements of modernization of the labor market must be published in the BOE before December 31. Therefore, it is for now “.

Díaz insisted that “Spain is going to undertake a structural reform of the labor market, which has not been done in 42 years. We are going to modernize the labor market and, above all, address its main problems, such as its temporary nature and its different formulas of precariousness “.

In the approval of Brussels to the Spanish reform plans, the approval was given for access to almost 70,000 million euros in transfers without having the labor and pension reform drafted, pending social dialogue. “It is being discussed within the social dialogue this week,” Díaz explained, “we are progressing well, at a good pace, we share a diagnosis. Many proposals are made at the table, but the way forward is to reduce the temporality. In our country we have 42 years with more or less the same evils and now we are working to correct them. This is the central element of the reform of the labor market in Spain, it is an ambitious reform in the background and that looks towards the possibility of having decent jobs and, above all, all, dignified lives. ”

Regarding the negotiation of the budgets, recently presented by the Government and which are pending their parliamentary procedure, the second vice president has explained: “We are going to negotiate on behalf of the Government, from the PSOE and from United We Can, and we must respect to the political formations that support this government. Negotiations must be respected and of course we will work to reach an agreement. ”

In this sense, he stated: “It is very difficult to say no to budgets that are expansive, that are inclusive, that have 40,000 million euros of investment, that are the most social in history, that place young people in the The center of its political action. In Unidos Podemos we have worked hard, for example in dependence, with another 600 million more in an aging country like ours. We are going to a serious negotiation, with the conviction that there will be budgets before the end of the anus”.

The second vice president and Minister of Labor, Yolanda Díaz, has affirmed, regarding the renewal of the General Council of the Judiciary, which has been blocked by the PP for more than 1,000 days, that “partisan uses of institutions are inadequate in democracy.”

“There is a political party, the Popular Party, which has a clear vocation to violate the Constitution”, said Díaz when he entered the Council of Ministers of the EU for Employment and Social Policy (EPSCO) in Luxembourg: “I think it is shameful It seems to me that the institutions must be respected, but we also need to give certainty and tranquility to a country that is suffering a lot. The institutions are not owned by any political party, they belong to the citizens, they belong to the Spaniards. ”

In this sense, the leader of Unidas Podemos has stated: “I call on the Popular Party to comply with the constitutional mandate and, in the same way that we have agreed between the Government and the Popular Party other organs of the State, it is essential that an agreement is also reached in the governing body of the judges. The partisan uses of institutions of the highest importance are inadequate in a democracy. ”