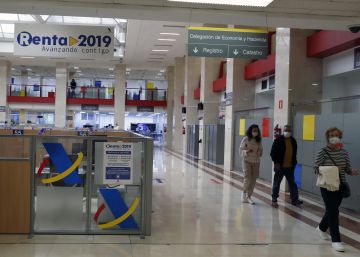 Spanish taxpayers can request from yesterday their tax data corresponding to the income campaign that will start on April 7, corresponding to the year 2020, a year marked by the pandemic also for tax purposes. Among other groups that will see their income tax return marked by the Covid-19 crisis, such as those laid off or recipients of the minimum vital income (IMV), highlights the central role that the group of workers subject to regulatory records of temporary employment (ERTE) due to its high volume; the particularities of taxation of this benefit; mistakes made in your payment; or the differences that may be taxed for them in one region or another.

Aware of the importance that this tool has acquired to contain the labor drain unleashed by the Covid-19 crisis, the Tax Agency yesterday published some clarifications aimed at the more than 3.5 million taxpayers who in 2020 were subject to an ERTE. They would add up to about 18% of the total filers. All of them received the Public Employment Service (SEPE) a benefit that is not exempt from taxation and is computed as income from work.

Given the magnitude, the Treasury will send mass information letters to those taxpayers in this situation who will not file income tax returns in 2020, corresponding to the 2019 financial year, and will reinforce personalized assistance to help resolve their doubts.

After all, the Treasury recognizes that workers who have had their employment suspended or reduced by virtue of this tool may face several peculiarities when declaring personal income tax. The main one is that all of them would have received income from two different payers: one their usual employer and the other the SEPE.

In general terms, only those taxpayers with income from work greater than 22,000 euros per year are required to file an income tax return. However, when there are two payers, the limit is reduced to 14,000 euros (if the second and third payers contribute more than 1,500 euros to the annual payroll). Due to this, 327,000 taxpayers affected by the ERTE will be forced to declare for exceeding that threshold, despite their low incomes.

As the SEPE is not obliged to withhold the IRFP in those payrolls of less than 14,000 euros –although the taxpayer can request it– this part of the payment could have been made without being subject to any tax until the time of the declaration.

Withholdings are payments in advance of the tax, to which both taxpayers who declare and those who are not obliged to do so are subject, which allows that the result of the declaration does not result in a sudden disbursement of personal income tax corresponding to the entire year . It can even result in a return to the interested party.

Thus, the fact of having two payers does not necessarily imply paying more taxes, but it does impose a greater control to ensure that, at the same income (they are from a single payer who withholds the tax due for the total amount paid, or from several that have less or nothing withheld for smaller payments), you end up paying the same amount of taxes. In this way, if the contributions of the second and third payers have not been subject to withholdings, or if they have done so in lower percentages, the result of the declaration will be payable to make up the difference.

The Tax Agency provides an illustrative example. From a taxpayer who receives 21,000 euros from a payer, the company withholds 2,578 euros, which will be the tax that he ends up paying, without having to present the income statement. In the case of a taxpayer with two payers, who receives 16,000 euros from his company and 5,000 euros from SEPE, the company withholds 859.2 euros while the state employment service does not subject him to advance payment of personal income tax. As a result, you must submit the income statement, which will have a result to pay to the treasury 1,645 euros. In this way, the tax finally paid is very similar to that of the worker with a single payer: 2,504.47 euros.

But this balance is not always true. The fact of having to present the Income declaration subject to the taxpayer to the specific rates that each region establishes for personal income tax in parallel to the national ones, which may result in that if the tax is higher than the general tax, the affected worker for an ERTE you end up paying more taxes than the one that, when collecting the same but from a single payer, has no obligation to declare. This was warned yesterday by the Registry of Fiscal Advisory Economists (REAF) and the General Council of Economists of Spain.

According to its 2020 data, a worker with an annual income of 20,000 euros would pay 2,338.2 euros of personal income tax at the national rate (applicable via withholdings to those who do not declare) but would pay 2,510.7 in Catalonia (172 euros more). Although this region will stop charging that regional premium to alleviate the effect, the rest have not taken similar measures so that the payment will be 2,394.1 euros in Aragon (116 euros more); 2,382.63 in the Balearic Islands or 2,372 in Asturias. The amounts are also higher in Navarra, Extremadura and Murcia. On the contrary, the tax would be 2,185.9 euros in the Basque Country (152 euros less than the average); 2,269.46 in Madrid, and 2,282.3 in the Canary Islands.

Overpayments. The flood of benefits linked to ERTE paid by the SEPE in 2020 led him to make mistakes in some payments, with average deviations of about 1,000 euros according to official sources, which will complicate the declaration of the affected group. If the SEPE paid a benefit greater than the corresponding one but corrected its error and claimed the excess before December 31, 2020, the problem is resolved because the Tax Agency already computes only the amount finally received as subject to personal income tax. However, in the case of those excessive payments not regularized before, the beneficiary will have to correct the figures that appear in their tax data before filing the return. That in case you know the real amount or the SEPE confirms it. If you do not obtain the information before June 30, the last day to declare, you will have to assume the payment of personal income tax corresponding to the entire amount received, then settle the accounts with the SEPE and finally claim the excess tax paid from the Treasury.

Example. A worker who charges 30,000 euros from his employer and 7,000 from the SEPE for an ERTE, must pay 6,686.99 euros of personal income tax. But if the SEPE paid you 5,000 extra euros by mistake, you can pay taxes for 42,000 euros, and not 37,000, having to pay 8,302.64 euros and, once the excess has been identified, claim the 1,600 euros from the treasury through a rectification of the tax. statement. The REAF recommends rushing deadlines and not declaring until trying to have the SEPE data.

Cyberattack. From the Ministry of Labor, on which the SEPE depends, they assure that they update the information to the treasury monthly, although they allege that the recent cyberattack suffered delays the process.