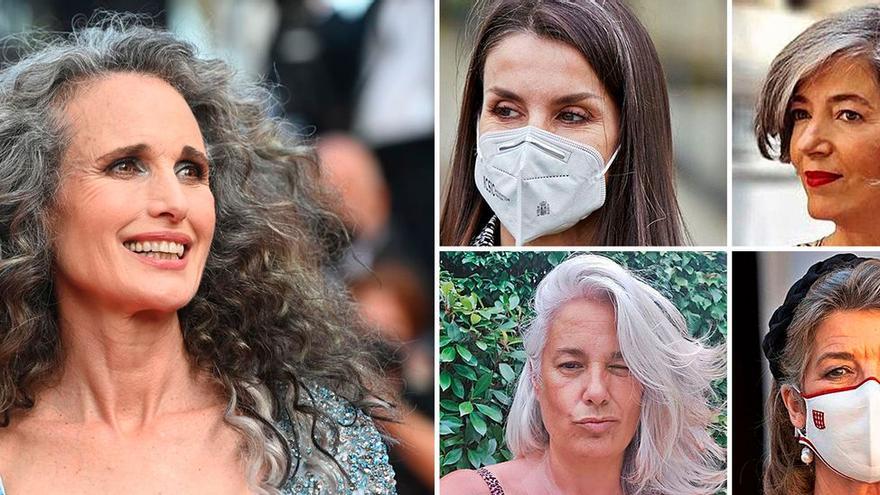 MacDowell is the latest celebrity to join the bandwagon of a trend that had been brewing for a long time – years ago. Oriole Rose, the owner of the jewelery firm Tous, became a female reference for silver hair in Spain. In recent months we have also been discovering how Sarah Jessica Parker she exposed her roots full of white streaks by displaying a hairstyle with her hair pulled back in a very long braid before the filming of the new season of “Sex and the City.”

Royalty itself is no stranger to the gray revolution, which is elegantly displayed on its mane long bob the very Carolina of Monaco and even the queen Letizia, whose entire strands of white hair have elicited various interpretations. Some suggest that it is a gesture in tune with the severity of the pandemic, by which it would try to give a less formal image and closer to the reality of the health crisis. Others hold that the consort of Philip VI she tries to send the message that she does not want to be perfect, that she is comfortable with her age, and that she is free to show herself as she wishes in society.

Social networks are not alien to this trend and there are more and more influencers who have decided to embrace their gray hair and encourage their followers to imitate them. “At 57 years old I do not hide my wrinkles, I do not hide my gray hair and I do not need artifice to feel satisfied with myself,” says the influencer of fashion, teacher and graduate in Basque Fine Arts Carmen Gimeno, who sports a nuclear white half mane.

She is not the only one: the Mexican Katya fields He shared his transition to gray hair on his YouTube channel and offers advice to his followers on the best care; Mariana trevijano, a pharmacist by profession, is a reference of the international Silver Sisters movement that promotes silver hair, and the journalist Maria Font Oliver She did not hesitate to proudly share on Instagram the process of changing her brown hair to white.

Taking into account that six out of ten women decide to dye their hair when the first gray hairs begin to appear, perhaps the defenders of silver hair have initially wanted to look for the originality that is lost when adjusting to fashion standards. The sociologist of the University of Vigo Benxamin Porto He refers us to his deceased French colleague, Pierre Boudieu, a student of the sociology of everyday life, who concluded that one of the human motivations and needs is the distinction, that is, the need to highlight personal identity within the social group to which one belongs. “In this way, the taste for art, leisure, surgeries, tattoos, etc. is explained. As a reaffirmation of personal and individualized identity manifested in distinctive tastes that highlight the difference within the amorphous mass, ”says Porto.

“Possibly, through gray hair, female empowerment has contributed to this identity as emancipation from the tradition that concealed or manifested the signs of time lived,” says the Galician sociologist, who emphasizes that “in our culture the body has become objectified by becoming in a sign and a merchandise that in turn is a language that expresses the visible narcissism of each one ”.

Taking into account that “certain popular figures in the media and advertising contribute to creating body and aesthetic models that are socialized as ideals,” according to Porto, it is not surprising that this trend is also prevailing in the street.

This is confirmed by the hairdresser from Vigo Mara Coasts, who believes that the revolution of female gray hair will be just a passing fad that will disappear as soon as we remove our masks. “The pandemic generates sadness and the ecological wave influences – although you can opt for natural dyes -, but personally I believe that gray hair does not favor and as soon as the crisis passes, the dye will return.”

This professional with more than 50 years of experience does not see any claim for gender equality behind this trend. “The feminist demands, as we see in the demonstrations, are full of color, both in dyed hair and in painted faces. The empowerment of women is a fact, it is there and it is fine, even if machismo resists ”, she continues.

Clients who decide to stop dyeing say they are bored with coloring three times a month. “You also have to brush your teeth several times a day, but I respect your decision,” says Costas, who points out that white hair also requires care. apple that avoid it; When someone decides to stop dyeing, it is horrible to see the white root and the rest of the colored mane, which is solved with contrasting highlights with dark bases until the final white is reached. Then you have to take care of the hair, cut it, apply products so that it does not yellow and so on ”.