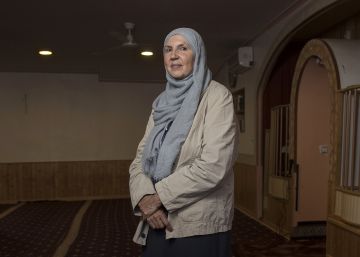 Mariam Cuenca returned in 2003 to Ávila, her city, with a secret. After three years working in a car wiring factory in France, he had changed his life: he had converted to Islam. "But anyone said it in Avila, it took a long time to come out of the closet," he says. It was not obvious either, he had stopped drinking and smoking. It was, incognito and after several centuries, the first Muslim of the Castilian province, in the land of Saint Teresa of Jesus. Until one day he decided to put on his handkerchief. Before he told his mother and his two children. "They understood, but for my mother it was a stick." He had educated her in the Catholicism of the sixties, in a tiny municipality of Avila, Villanueva de Gómez, which now has 140 neighbors. Mariam was even a catechist, and the first with cowboys from her town, a hippy. He also went against the current when he separated with 24 years old and two children in the eighties. "My spiritual search took me here, I saw that this was my thing," he sums up. Two years after donning the handkerchief, in 2005, he opened the first mosque in Avila in an old printing house. On Thursday, several worshipers entered the evening prayer and greeted her, "Salaam Alaikum". It is she who leads this.

He does not lead the prayer because women can not do it, and he also does not know Arabic, but he is the soul of local Muslims: if there was not one 15 years ago, when she felt like a Martian, now there are 4,458 in the whole province, according to the 2018 report of the Union of Islamic Communities of Spain. And there is another mosque in the city. This 60-year-old woman is the secretary of the Islamic Community of Ávila and the Delegate of the Islamic Commission of Spain in Castilla y León, the woman who occupies a higher position among Spanish Muslims. In other European countries, women have already emerged who lead mosques and who even act as feminist imams, but in Spain it is more rare.

Guess the first question, smiling and pointing to the clothes: "How did I end up like this?" She tells that she was always religious, but since she was little, for example, she did not believe that Jesus was God, and how you were going to say that to a priest in the Franco regime. After a long crisis of faith, he became Protestant. "But with Islam I have discovered the direct relationship with God, without intermediaries, nor saints, nor virgins, nor hierarchies. It's a way of life and I saw that it was what I wanted. " Remember that the first times in Ávila were hard. "I was alone, you can not live your religion like that, I was sinking, I was wondering what was going to become of me".

In the supermarket, a woman who saw her dressed like that scolded him. "He told me: 'It seems a lie, so many years struggling to make women visible'. But if I am more visible than before. I am the first feminist, I believe in equal rights, but ask them, the Muslim women, what they think. Neither are we undervalued or enslaved. I want to dress like that. "

I went and came to Madrid, the mosque of the M-30, where it was integrated. Until in 2005 he saw another woman with veil in Ávila, in a bank branch. "I jumped on her excited, so much so that her son got scared. I was Algerian, I did not speak Spanish. Then they invited me to their house and I already knew others who were around here. " Seeing that there was a small community, the idea of ​​opening a mosque arose. First they created a legal association, and then spent months looking for a place. As soon as he said what it was for, the owner refused and did not want to know anything. In the end he got it thanks to an acquaintance. There they continue to rent. But the hardest thing then has been to find a good magnet. Prepared and with guarantees, for that they do not get some exalted. They have had several, but they can pay little and they do not live from that, they also have to work on something. "Here they have a hard time coming and they last a short time, and in a small community they do not need every day, only on Friday and something on the weekend. And in Ávila, what job are you going to find? Only waiter. " Right now they do not have a magnet.

There is a phenomenon of small Islamic communities that emerge in the Castilian plateau, in small towns, with immigrants, mainly Moroccans. They work mainly in construction and in the field. In Ávila, for example, there are mosques in Navalperal, La Cañada, Las Navas del Marqués, El Tiemblo, Arévalo … In Castilla y León, one of the regions where they have been arriving later, there are already 38,945 Muslims. The most numerous, in Burgos, León, Valladolid and Segovia. In 2016 they started teaching Muslim religion in Soria, the first in the community, and she was a teacher. Now there are six teachers. This year the Junta de Castilla y León has approved that funerals with Muslim rite be allowed in the cemeteries, as already happens in Andalusia, Asturias, Valencia and the cities of Ceuta and Melilla.

"There is a lot of movement of people. If there is no work they leave, and the people who get the nationality go to other countries in Europe. Many women also live with children alone, with the husband working in Madrid or Barcelona ", explains Mariam Cuenca. Are they integrated? "There is everything. The obstacle is the language. There are women who are with their children at home and have been here for years without speaking a word. But the relationship with neighbors is always good, and what is integrated? If you do not do Halloween and you do not go to the Reyes parade, it seems you are not. But integration is a matter of two. It's not that the one who arrives must forget who he is. " There have been no notable xenophobic incidents, except painted in mosques. As in Ávila this year. "But they painted a cross for us, and for us that is not offensive," says Cuenca.

On the presence of women in Spanish Muslim communities, the president of the Spanish Islamic Commission, Riay Tatary, explains that "here we enjoy women with very high qualifications and qualifications in Islamic theology who provide training and are in the organization and administration of mosques." "Both men and women have an essential role in our communities, and to be elected in a position is taken into account their personal capacity regardless of gender," he says. "That there are more or less women has more to do with the sociological casuistry". Although Cuenca has a more visible position, Tatary points out that there are other women in two technical commissions of the entity that she presides over.