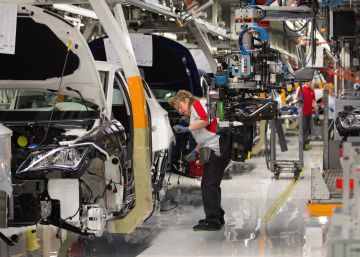 In relay races, it is not only the speed that matters, but also the conditions in which the witness passes. The same happens with macroeconomics. Like relievers, there are four quarters for which growth data is offered. Yesterday we learned that the third of 2019 showed symptoms of fatigue that will probably condition the career of the final three months of the year. Apparently, the speed is expected - GDP grew 0.4% between June and September - but the witness is somewhat lower because the year-on-year growth is no longer the expected 2%, but falls to 1.9 %.

The collapse is widespread, but particularly pronounced for external demand (which contributes only one tenth to the advance, compared to 1.8% of domestic demand). There was also no special animation in private spending and, nevertheless, there was in the public, despite the fact that budgetary restrictions were important and will be more so next year.

The team will, in any case, reach the goal, and it remains to be seen if the year finally closes below that 2% that seems to be a psychological barrier. What does seem to be that the 2020 sprinters will be somewhat slower and next year the GDP will be around half a percentage point lower (1.5%). It will converge with most European teams in a somewhat more anemic economic activity and it will be much more complicated to generate employment, although it is expected that it will continue to be created. ç

All this happens with reduced price levels. The CPI rose yesterday to 0.8% (after 0.4% in November) but the rise is associated with the rise in fuels because the underlying components of consumption remain sleepy. Inflation is still lost and one of the great unknowns of 2020 is whether it will be found again. This is followed by the monetary policy of many central banks.

Fear of the global recession

Regarding external conditions, extraordinary strides outside the road are no longer feared because the fear of a global recession has largely dissipated. However, in 2020 there will continue to be downside risks. United States will hold elections in November, but all year seems to subscribe to a considerable political imbroglio that, as usual in recent years, will have consequences on the outside. In the financial field, some stress can be seen in the debt markets, a pot in which pressure valve there are many hands touching. And above all, next year will be of great strategic move.

Among other issues, there will be a lot of movement in commercial negotiation in the coming year. the new agreement between the EU and the UK will be decided and there will be numerous leads and externalities which ultimately materialize (or undo) United States and China. It will be a year, therefore, to act politically with attention and agility in an economy like the Spanish can not afford to be offside, bloated by internal problems begin to eternalize.