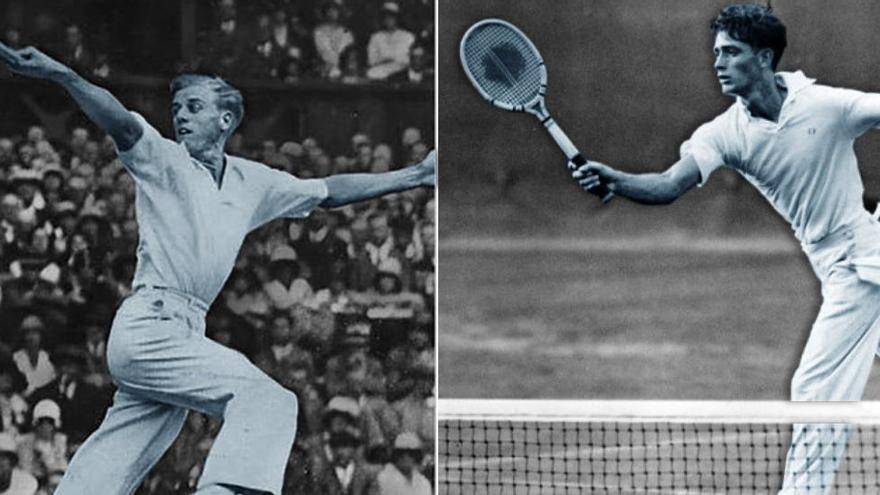 Of all the episodes that Wimbledon has given away throughout its more than century and a half of existencePerhaps one of the most striking occurred on July 3, 1931 when thousands of fans sat in the stands without being able to enjoy the final of the men's team that they had come to witness. A surprising duel between two North Americans: Frank Shields Y Sidney Wood, the seeds number three and seven of the tournament. Young, promising, extraordinary friends since they were children. They were going to play the game of their lives after starring in two gigantic surprises in the semifinals. Shields had gotten rid of Frenchman Jean Borotra, the main favorite, while Wood had defeated one of the local heroes, Fred Perry, who would have to wait until 1934 to win the first of three trophies he raised on the grass at Wimbledon.

Frank Shields during a match.

In the semifinal against Borotra the key play of all this history took place. Shields injured his right knee and ended the game somewhat limping. During the rest day prior to the final, medical examinations and meetings took place at the hotel where the North American players were staying. A few weeks later, the United States faced England on the courts of Roland Garros in search of a place in the final against France, and for the rectors of tennis in that country that trophy was above any other circumstance, of any tournament of the circuit. Wimbledon, for all its grandeur, was entirely secondary to them. Shields wanted to play, Wood wanted his friend to play, but the USTA (American Tennis Federation) insisted that it was best to resign so as not to jeopardize their participation in the Davis Cup.

The next morning both players hit the Wimbledon courts. Shields felt strong enough to play, but when they got to the locker room they were met with harsh reality. At night, while they slept, the USTA had resolved the matter for them. His decision was not to play. Shields could refuse, but he knew that was starting a terrible fight against those responsible for his sport, who would sanction him and end up vetoing him from most major tournaments. His protests and those of his partner were his only consolation. This was followed by the other difficult moment of the morning: communicating the decision to those responsible for Wimbledon. That raised the temperature much more because the English considered it a gigantic offense. They knew perfectly well that Shields was in a position to play the match and that the decision was made for the benefit of the USTA and caused enormous damage to the London tournament that with all the pain in the world had to send home fans who had already filling the stands after complying with the tradition of eating strawberries with cream.

Sidney Wood during a match

In the offices sparks flew, threats and disqualifications were crossed, but the truly emotional moment took place in the locker room. Shields and Wood were alone for a long time, regretting not being able to hit the court to play the game they had always dreamed of. For any of them it was their first “big” but above all, what filled them the most was that the disappointment of losing would be accompanied by the joy of seeing his friend lift the champion trophy. The bitterness would never be complete for the loser.

Minutes later Wood took to the track to receive the champion trophy in the midst of a climate of enormous tension. There was no longer an audience and the outrage of the Wimbledon rectors reached unthinkable extremes. They even considered canceling the ceremony, but at the last moment they backed off to prevent the scandal from getting even bigger.

Wood then fulfilled the promise that in the solitude of the locker room he sealed with Shields, that handsome boy who was fond of the good life whom he had met at school in New York and whom his love of tennis had always kept close. He presented the champion trophy to Maud barger, a former player, daughter of owners of a New York railroad and a good friend of both players, and asked her to keep the trophy for as long as necessary. Wood knew that Shields - number one in the United States at the time - was the big favorite in the final and that having that trophy at home in those conditions was a minor disgrace to him. "I will not put it in my window until I win in the final of a great tournament on grass to Frank," he told Maud at the time of making her the trustee of the trophy.

They both continued their lives waiting for that moment. Interestingly a few weeks after the incident at Wimbledon came the famous Davis Cup showdown between England and the United States. Shields had to play the fifth and decisive match that faced him Bunny austin, one of the players he had beaten on the London grass. A tight duel like all that tie played in Paris. But lost. England eliminated the United States and somehow its tennis avenged the affront suffered in London by the leaders of the American federation.

It took a while to resolve the issue between Shields and Wood. The two players did not meet again in a final on grass until the Queen's tournament in 1934, almost three years after they reached that agreement in the Wimbledon dressing rooms. On that occasion Wood, a sickly boy who spent more time in hospitals than in his own home, was much better than his great friend. He won 6-4 and 6-3 to win the Queens and Wimbledon of 1931. Upon his return to the United States, the first visit he had at his home was that of Maud Barger who returned the trophy that he had been guarding for three years.. "You can put it on the display now," he said.

After that the two players did not experience great moments in the world of tennis again and they showed how different they were in character. Shields had a messy life. His connections with the world of cinema made him become a supporting actor in a good number of films and alternated with many of the great artists of the moment. He was married three times - one of them to an Italian princess - and among her grandchildren is the actress Brooke shields. He never got to focus and choose his path well. The USTA's attempts to return him to tennis as captain of the Davis Cup team ended in disaster after making several hard-to-justify decisions and alcohol became his main traveling companion. He survived two heart attacks, but not the third that ended his life when he was 65 years old.

Shields's funeral was attended by his good friend Sidney Wood, whom he seldom listened to when he alerted him to the kind of life he had chosen. Wood was the opposite. After leaving competitive tennis, he wisely chose the businesses in which he would invest his money. He started out as a stockbroker on Wall Street and then turned to mining, a sector he knew quite well thanks to his father. He made money, lived peacefully and died at the age of 97 in the same house where he always kept the Wimbledon champion trophy along with a photo of him smiling with his friend Frank Shields before starting a match.