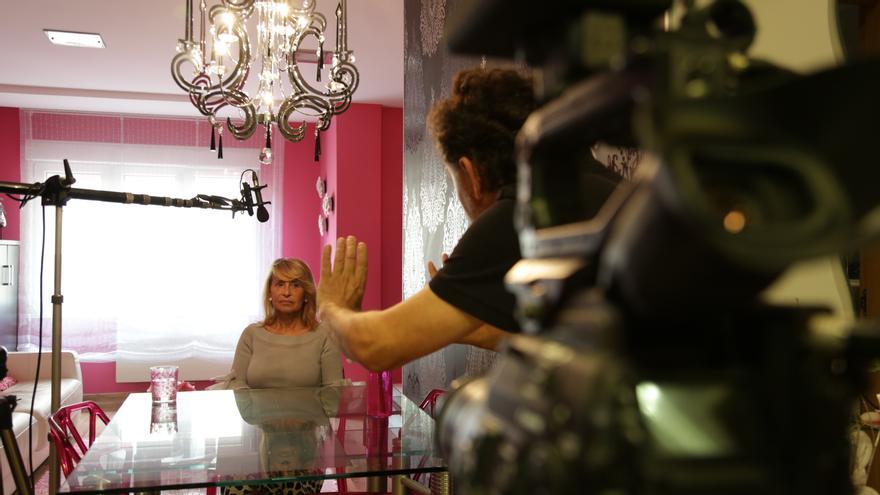 25 years ago, accidents in Asturian mines were common occurrences. But the one that took place on the night of August 31, 1995, in which fourteen miners died on the eighth floor of the Well of San Nicolás or 'Nicolasa', marked a before and after. To this day, tributes are still celebrated in honor of those workers who lost their lives in the bowels of the earth. One of them is the documentary Dark lamp, directed by José Antonio Quirós, which collects the testimony of a group of women, mostly widows, affected by this and other mining tragedies in Asturias.

This work can be considered a continuation of a previous documentary titled Alone on earth (nineteen ninety six). Quirós had the idea after the accident at the well located in Mieres and followed up on the situation of women close to that and other similar events. It was not easy: many were reluctant to participate because they did not want to talk to journalists. Finally, he managed to gain their trust, the project went ahead and was broadcast on TVE with great public success. This new documentary rescues some of those voices to verify the effect of the passage of time in a tragedy and incorporates new ones that had been left out.

Ten Spanish miners employed by the Hunosa state company and four from the Czech Republic who worked for the Satra subcontractor died in the San Nicolás Well. The widows of the latter do not appear in the first documentary, a thorn in the neck that Quirós wanted to get rid of. So for this second film, he selected four of the most representative Spanish women from Alone on earth and managed to get in touch with three of the Czechs. "It was a very, very difficult task, there was no way to find them," says the filmmaker to elDiario.es. "One of the Czech miners who managed to save himself became a translator and we went with him twice to the country. We even went to the archives of the association of workers who emigrated to Asturias in the 90s and after a work of about four months we managed to find them" , Explain.

The way in which the tragedy was experienced in one country and in another was very different. While the women of the Czech Republic received the coffins of their husbands with no more shelter than that of their close ones, in Asturias the government of the Principality decreed three days of official mourning and society went out on the streets en masse to dismiss the victims . The images of thousands of people silently accompanying the coffins of the dead carried by their companions from the mine are part of the black history of the principality.

Asturian journalist Aitana Castaño, co-author of the books The smoke children and Carboneras together with Alfonso Zapico, he remembers that day perfectly. "I was just 15 years old and I was going on an excursion to Covadonga with the parish of my grandmother's town. Before leaving home we had already heard on the radio that there had been an accident and there were two deaths, or something like that, and on the bus we heard the number go up. I had a feeling of great sadness, something inside me told me it was at home, "he recalls. "The people on the bus were singing songs of all kinds and suddenly they sang At the Maria Luisa Well [el himno de los mineros] and it seemed to me a lack of respect, it seemed that they did not realize that at that moment it was not just any song ".

The reaction of the widows of both countries to the financial compensation offered to them was also different. It took a long time to clarify the reason for the firedamp explosion that killed the fourteen workers. Hunosa spoke of unforeseen and denied any type of infraction in the security measures, although he had already received complaints from workers about it, including one of the deceased. Four of the widows joined together to fight and denounced the company through civil, criminal and administrative channels until a decade later they managed to win the lawsuits. In 2010, Hunosa had to pay hundreds of thousands of euros to widows and relatives.

"As can be seen in the film, the Czech women were satisfied with what the Spanish Government provided them, a widow's pay, while those from Asturias decided to fight. The communist system made a dent in these things," says the director. "The Spanish tried to get in touch with the Czechs at that time. But they were defeated, they said they were not willing to continue like this, that they had a very pronounced grief. Here the union was felt more, a solidarity almost from all of Spain and from some points of Europe, but there they were forgotten ".

But the reaction of the women of the Czech Republic is not something that had not happened in Asturias before the plaintiffs in the 'Nicolasa case' set a precedent. A year before the event, in 1994, Laroxina's father (fictitious name, the interviewee prefers not to give her name) died in an accident in another Asturian well. She was still a child: "I think it was a landslide because it broke a bag of water. Something like that, because at home we never talk about it," she told elDiario.es. "There was no compensation because with the shock my mother signed something with which she gave up everything."

The passage of time heals wounds, but it does not always close them completely. The women who star Dark lamp they went on with their lives after the accident, each in their own way. They entered into new romantic relationships, moved to their own space, traveled the world or raised their children, but always with the memory of the dead husband present. Quirós had a harder time convincing them to participate in this film than 25 years ago. "The Czechs not so much because they considered how someone finally remembered their figure. And here the opposite happened, they did not want to touch the subject any more and, in fact, they do not accept any type of interview from journalists."

In the documentary there are video fragments in a 4/3 format that correspond to Alone on earth. They serve to check the passage of time in these 25 years. There is a fact that draws attention: in the testimonies of the past they assure that they do not want their children to work in the mine but today some say that they had no choice but to accept their children's decision to oppose them. The fear of an accident at the well continues to accompany them.

Quirós comments that after the 'Nicolasa' accident: "many things stood up. Before, it was said of widows, even with contempt, that they kept their husband's pay and that's it." A kind of accusation of unsubstantiated wealth, since the deceased's wife received 55% of what the worker earned, as was the case in any sector at that time. And depending on your position at the mine, it could be a pretty low amount. "They told Hunosa: 'be careful, we are here' and they changed many things. The compensation and that many things be taken into account, because before there were some imprudence that you cannot even imagine. Now there is an impressive care", Quirós maintains.

The widows of 'Nicolasa' are a reference, both for their struggle and for the symbolic burden that the accident had. Aitana Castaño affirms that she like some of them and that "they are totally trapped in that day, in that event." "But not caught with negative connotations, it is just that they are 'Nicolasa's widows', a title that none of them wanted but that is there," he adds. For her, that misfortune is "one of the last chapters of mining" that in a certain way "unites the last generations" who lived the mining basins "as they were before." "It was the year 95, the mines were already beginning to close. A sad epilogue because in the end there were no more than fourteen deaths, but it is also part of the epic of the mining basins," he recalls.

The premiere of Dark lamp It had to be delayed for a year due to the pandemic and, after a presentation at the end of August in Gijón, the exhibition was made directly on the Filmin platform.