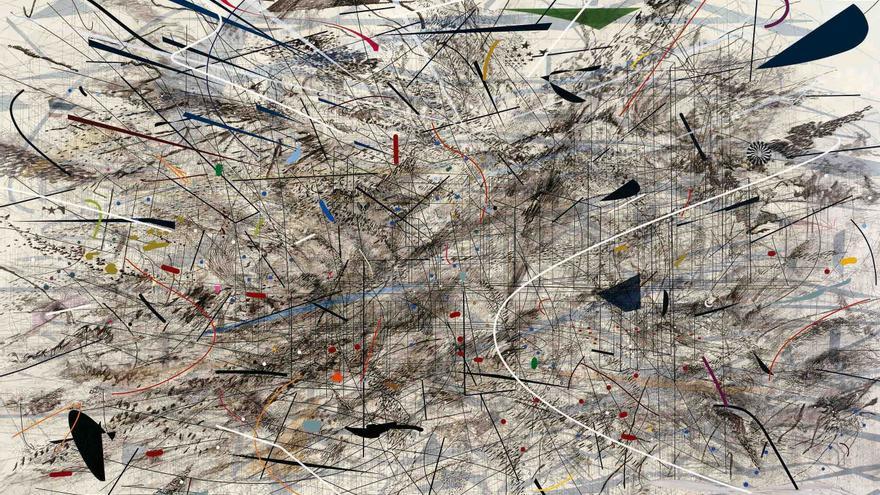 New York, Mar 16 (EFE) .- The Whitney Museum in New York has presented this Tuesday the new exhibition that will be dedicated to reviewing the inquisitive work of the acclaimed Julie Mehretu, in which it brings together more than seventy pieces dating from its beginnings to The mid-90s to the present day, covering everything from art history to current immigration issues.

This is an exhibition in which the cultural institution, which focuses on contemporary American art, intends to recount the work that the 51-year-old painter of Ethiopian origin has developed so far, in a “mid-career” exhibition .

In recent years, Mehretu has begun to see how recognized institutions buy some of his works, such as the Museum of Modern Art in New York (MoMA), the Brooklyn Museum or the Minneapolis Institute of Art, while other museums have directly commissioned him. specific pieces for prominent spaces, such as the San Francisco Museum of Modern Art (SFMOMA).

In this case, the Whitney, in collaboration with the Los Angeles County Museum of Art (LACMA), has gathered some 40 works on paper and more than 30 paintings that can be seen from March 25 to August 8 at the spacious top floor of the museum.

There, you can find copies of the drawings and maps on which he focused in his early years, in the 90s, until the introduction of intense brush strokes and color saturation a decade later, and that reflect the inquisitive efforts of the artist around the history of art, architecture and past civilizations, as well as topics such as immigration, revolution, climate change and global capitalism.

Among the most outstanding works in the exhibition, considered the first retrospective dedicated to Mehretu, stands out a large, colorful abstract piece created by the artist exclusively for the exhibition, which still has no title, and which occupies one of the spacious walls of a bright living room with panoramic views of the Hudson River.

It is an adaptation of “The Raft of the Medusa”, by the Frenchman Theodore Gericault, painted between 1818 and 1819 and which reflects a scene of the shipwreck of a French navy frigate, in which at least 150 people were adrift on a hastily built raft.

As Mehretu explained in her presentation, the artist was inspired by the migratory problems that have occurred in recent years and that have faced different sectors of society, but she pointed out that she wanted to remember in her work that the massive movements of people They have been going on for centuries.

“Everyone at the moment has been thinking about migration, the migration crisis. Not that migration is something new, because it has been present since the beginning of humanity,” he said.

From the window that presents the painting with a stream of light, the iconic Statue of Liberty can also be seen in the distance, which in turn is a sign of the enormous contrast in migratory terms of what the United States represents, and that also he wanted to capture in his painting.

“Everyone who looks at the Hudson River looks at the Statue of Liberty. (…) When at the same time you realize that it represents (…) the history of this country and that this is still one of the greater entry points for new immigrants to the country “, has indicated Mehretu, who has made reference to the irony that supposes that a nation that was formed by immigrants wants to avoid that more arrive.

“There is a huge contradiction in the dynamics of this country as to who has the right to space, land and resources, and I wanted my painting to reflect that as well,” he stressed.