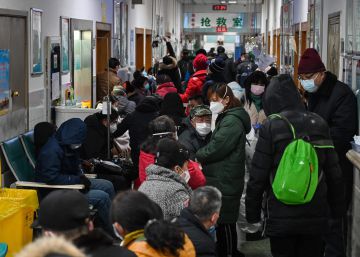 They have been baptized as baise tianshi: white angels. The color is given by the plastic suits that cover them from head to toe. The heavenly condition, the willfulness with which they put their lives at risk. If it were an ordinary day, Wuhan health workers would now be at home, following the custom of celebrating the lunar year premiere as a family. But today is the third day of quarantine in the city and the coronavirus 2019-nCoV has again passed the control of the authorities. Official data in China already reach 54 dead and 1,700 infected. This last figure has doubled since yesterday and could soon do so again, as more than 2,000 suspicious cases await confirmation. Meanwhile, the hours pass and the white angels continue to pay attention on the front line, fighting the outbreak without a moment of rest and with increasingly scarce means. They are the heroes of this story.

The responsibility, the fatigue, the fear: all are enormous. Although they look like angels, they are people, and as such they sometimes break. The emotional collapse of health personnel in Wuhan hospitals has shaken Chinese social networks, arousing both regret and admiration. In a video, a nurse cries loudly. “If we rest, they treat us like traitors, only death awaits us here,” he laments. Another shows three bodies in a crowded hall that nobody has time to remove. The death this morning of Liang Wudong, a 62-year-old doctor infected while caring for the sick, is a good example of the risk involved in the operation and the sacrifice of those who execute him.

In the district of Qiaokou, near the center, two of the hospitals that are most infected are located: the Tongji and the Wuhan Union. There the security measures are more lax than in the main medical center of the city, the Jinyintian, whose accesses are protected by security forces and what happens inside hidden in the May of secrecy. In Tongji, on the other hand, from the other side of the glass a pair of white angels can be seen moving at full speed among a group of patients, mostly elderly and connected to drippers. It’s the lobby, not even the waiting room, and there’s not a single free chair.

In the Wuhan Union the doors are wide open. When two health workers enter carrying an oxygen bottle, a voice on the street exclaims “jiayou”, An expression of encouragement. Here in the doctors care for the relatives of the infected. For two hours a day, the hospital allows them to go to check the health status of their loved ones, with whom they have no way of maintaining contact, and to bring them gifts and food. Around the counter, family members accumulate firing questions, about plastic bags loaded with fruits. On the other side, a nurse who does not supply.

There they appear, as incredible as it may seem in a city of 11 million inhabitants in which everyone covers half a face, known features. It’s about Zhang Wenzhen, the woman waiting at the door of the Jinyintian hospital, desperately looking for news of his mother, whom they had admitted after their analysis confirmed the infection. “I haven’t been able to hear from her yet, I just know she’s still there,” he laments. “Today I came here because my older sister has been identified as a suspect case. They are doing tests, and if it is positive they will put it in isolation. ” She is still not worried about her own health after exposure to the virus, “my sister does not live with us and I feel well,” she clarifies between coughs.

An even more blocked city

The authorities have announced today that from midnight –5 in the afternoon according to Spanish time– it will be prohibited to drive on the streets in private vehicles. Nor will gas stations allow refueling of vehicles with local registration. In this way, the Wuhan blockade will be complete: a city that cannot be entered or left, and inside which there is no other way of traveling than on foot or by bicycle, which greatly limits movements in a population of 8,494 square kilometers – the equivalent of 14 times the surface of Madrid. Although, in the case of Mr. Zhou, not even this measure has been able to curb his momentum.

This Wuhan resident saw the crisis coming. “I I filled my pantries in December, with a lot of rice and a lot of flour. I also bought a hundred masks and several bottles of medical alcohol. ” Therefore, when this week the situation worsened, “I did not panic.” He confined himself to confine himself in the solitude of his apartment, from where he has not left since last Wednesday 23, “both for my health and for that of others.” But today something has changed. “This afternoon, seeing in networks the terrible things that people wrote about our city, I felt the obligation to go out and show the true reality. In the end, we all live on this earth together. ” To illustrate his argument, he quotes from memory a verse by the classical poet Cao Zhi: “If the branches and beans come out of the same root, why do branches rush to burn and cook beans?”

For this reason, Mr. Zhou has spent the day touring Wuhan, recording everything that was happening and showing how the city’s population strives to bend to the outbreak. On his walk he arrived at a hospital. “As soon as I entered, the doctors knew that I was not a patient and that I was only curious to know how things were. They told me that I could not be there and that recording was not allowed. I knew they were doing it to protect me, so I left. ” “Health workers are helpless,” he adds, “but they have no alternative.” “I’ve seen doctors and nurses collapse and faint: everyone has a limit.”

At this time, with the midnight already overrun, the drip of cars that the road had become completely dried up. It is the end of a day when the outbreak has worsened. Worse for the world. Worse for Wuhan. Worse for white angels who, another night, will fight the virus instead of sleeping while the number of victims continues to grow. Perhaps one of them is Zhang Wenzhen’s mother. Or his sister. Or herself, who has stopped answering the phone.

The uncertainty of the patient zero