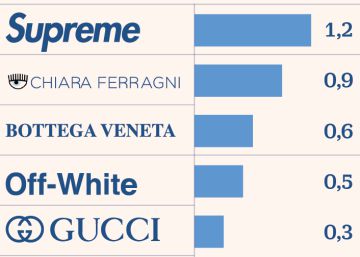 2020 has not been a good year for the high-end either. Industry turnover fell 22% as a result of the Covid-19 crisis, according to the study The state of fashion, prepared by the consulting firm McKinsey & Company and presented this Thursday during the conference Digitization in the high-end sector: now or never, organized by Círculo Fortuny together with the ISDI digital business school.

Online channel revenue grew considerably in 2020 and was around 45,000 million euros, compared to 34,000 million the previous year. This increase, however, is not enough to offset the loss of billing in the physical channel, as a consequence of the closure of establishments and confinement, in addition to the socioeconomic situation. The global luxury market in 2020 is estimated at 195,000 million euros, while in 2019 this figure reached 298,000 million euros. Despite this, McKinsey expects that, after this downturn, the industry will continue to grow and reach 254,000 million in 2021 and 389,000 million euros.

However, the future does not go exclusively through online channels, but omnichannel will be the real lever for the next few years. This, in fact, is growing more in Europe and the United States (+14 points) than online (+3 points). Thus, Carlos Sánchez, associate partner of McKinsey, assured during the presentation that China shows the way forward. The report reflects that the experiences that are physically had in the stores of the brands are those that have a greater impact on the purchase decision (90%). “The big change we see in all this is that the store is not alone in this customer journey when making decisions,” says Sánchez.

Along these lines, the McKinsey partner who leads the consumer area, Ignacio Marcos, believes that Covid-19 has been a catalyst that has accelerated the trends that were beginning to reappear for five years, which, for the expert, would have to consider as a real disruption and not just an increase in cruising speed. All this, however, will not be possible without a strong economic commitment to these formats. This was also pointed out by the general director of the Teatro Real, Ignacio García Belenguer, during his speech: “We think a lot about investing in spaces, but we also have to spend digitally. Now is the time to make this bet ”. The head of the institution also claimed the importance of incorporating people with the appropriate training to carry out the transformation into its ranks. “A talent that we will surely have to look for outside because we are a sector that has traditionally been less linked to it,” he acknowledged.

The Administration also considers that the context of the pandemic is the time to promote the digitization of the Spanish business fabric. This is how the Secretary of State for Digitalization and Artificial Intelligence, Carme Artigas, who announced that this year the budget of her department has been multiplied by 10 until the 3,000 million euros. “Spain is the only country that is going to allocate 33% of recovery funds to digitization compared to 20% of the European average,” he insisted.

For brands, this new paradigm is also a challenge. As pointed out by the vice president of Natura Bissé, Joaquín Serra, firms must adopt an attitude challenger (challenging). “This happens by being humble enough to detect what others are doing and be inspired by them. It also goes through transparency; people will want to see how we manufacture, where we are … ”, continued the manager. These firms, usually more current, will also be better placed on social networks. The McKinsey report reflects that brands challenger have a better interaction ratio likes/ followers with his fans than the most consolidated who rely mainly on his legacy. At this point, the study especially highlights the American fashion brand Supreme.

For all this, the executive director of ISDI, Ignacio de Pinedo, stressed that luxury must get on this train and take advantage of its leadership position to continue growing. “Europe is the Silicon Valley of high-end brands”, He concluded.