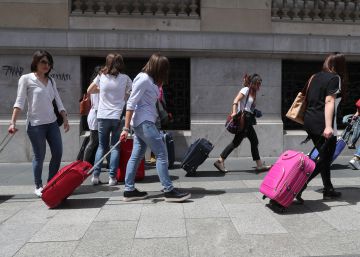 The web pages of hotels in Spain are already the second channel with the most reservations on-line Receive in Spain. Only for behind Booking.com, the market giant (although it is only an intermediary) that maintains its domain. “It has revealed the growing success of the direct booking strategies of the hotels and the growth strategies of the tourism industry giants,” collects the study presented on Wednesday SiteMinder.

Last year there were more than 340 million overnight stays in Spanish hotels. Two thirds of them were made by 83.7 million foreigners who visited the country, of which 54.7 million stayed in hotels, according to INE data. And these spent 59,200 million, 64% of the total invoiced. Since the vast majority of reservations were made through the internet, through travel agencies on-line (OTA, for its acronym in English), the hotel industry has invested in recent years to improve its sales channel to stop relying on those platforms, to which it has to pay a commission of between 10% and 15% .

“Direct bookings on the Internet contribute significantly to increasing hotel revenues worldwide. It is clear that hoteliers are still looking for the right way to attract more reservations of this kind, ”says James Bishop, general director of international alliances at SiteMinder. Something they match Meliá fountains: “[Con la venta directa] You reduce the payment of commissions, make brand and help customer loyalty. In our case, a third of sales come through our direct channels, ”explains José Luis Aranda, director of digital marketing for the chain.

In this way, in the last year the hotels websites have managed to unseat in Spain to Expedia of the second position, although it remains as the intractable leader Booking.com. SiteMinder prepares this classification every year with the main channels through which customers book their hotel rooms in Spain. The order is established by income, not by the number of reservations. In total, the ranking takes into account 105 million operations on-line of travelers from all over the world on platforms connected with SiteMinder. This means a total income of 31,000 million euros through the technological platform, which serves hotels, agencies and other distribution channels.

The growth of Agoda, an agency, also stands out in the Spanish market on-line founded in Thailand that in 2007 was acquired by The Priceline Group, the parent of Booking. The rise of Asian tourism in Spain explains that this agency climbs to seventh place in Spain. The study also reviews the rapid rise of Jet2holidays, which first appeared in 2018 and has already sneaked into eighth position. “It reaffirms the value of UK travelers for the Spanish economy,” says the study.

In other countries, the rise in direct bookings is also felt through the hotel websites. In fact, in Australia, France, Italy, Mexico, the United Kingdom and the United States it was the third most used distribution channel. In these cases, Expedia sneaks still ahead of the hotel websites themselves.

STEMs do not understand gender or barriers