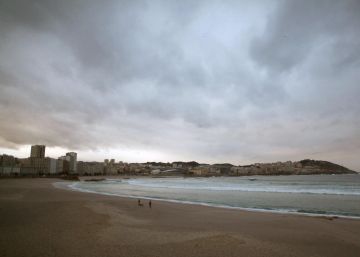 Tomorrow it will rain, we say. Most of the time it is so, because the Weather forecast It handles well in 24-hour stripes. But the current weather doesn’t know how to answer another more specific question: is it going to rain when I leave home in 15 minutes? Physics cannot answer, but artificial intelligence is here to help.

This breakthrough is called nowcasting, which is something like the “immediate weather forecast”. The fastest current prediction entails at least six hours of computing and its spatial scope does not fall below three kilometers, although it is usually longer. So physics, at best, can prophesy in the morning the weather it will be in the afternoon.

This preview is called ‘nowcasting’, which is something like “immediate weather prediction”

How does technology overcome these limits of physics? Analyze millions of photos of clouds from a specific space. By observing how these clouds have evolved in the past, you are able to predict how the current clouds will change. Therefore, instead of working with a model that analyzes the physical complexity of whether it rains or not, which requires a computational effort that no current supercomputer can accelerate, they predict what a radar image will look like after analyzing millions of previous images.

A model of machine learning Learn to guess that a cat is a cat because they have fed it with millions of pictures of cats. The machine sees pixels that are most likely a cat. It does the same process with the clouds: millions of cloud photos made by radars allow the model to predict how the cloud will most likely be in the next few minutes, and so on.

Google just published a scientific article about nowcasting of rain in the United States: “We explore the effectiveness of treating nowcasting of rainfall as an image-to-image problem, “the company’s researchers explain. They analyze the territory divided into one kilometer grids and obtain the results with a certain probability of rain minutes after the radar images are taken. The method It is new and not infallible, but there is nothing better for now to know the exact behavior of a storm.In addition, this model is only for rain, does not provide temperatures or other phenomena.

When it is going to rain consistently in a city for three days in a row, such a model is hardly useful. But the climatic phenomena are increasingly extreme and capable of creating crises: knowing in which exact areas of a city it is going to rain to seas can be key to avoiding a disaster. “As weather patterns alter with climate change, and as the frequency of extreme events grows, it is increasingly important to provide useful predictions with high spatial and temporal resolution,” says the Google article.

Traditional physics is not in a position to disregard this help for now: “They are a breakthrough for meteorology and especially a solution for complicated episodes that need a concrete and adjusted resolution, such as cold drops or very local summer storms,” ​​he says Mar Gómez, doctor of physical sciences and responsible for meteorology at eltiempo.es.

Rain prediction is not the only field where the nowcasting. Also, for different purposes, in solar radiation. With a method similar to Google, but with radiation data instead of cloud images, a team of Spanish scientists is able to predict immediate solar radiation using sensors: “If we want to predict future radiation values ​​of a sensor we use past values of that same sensor and others around it, “says Alberto Torres Barrán, a postdoctoral researcher at the Institute of Mathematical Sciences (ICMAT).

These methods are being perfected, but they may already have specific applications. A solar power plant, for example, needs to foresee the amount of sun that its mirrors will receive to succeed in their placement and ability to generate electricity. Now that work is done with cameras that take pictures of the sky: if a cloud comes, they anticipate that the radiation will go down. But the cameras are expensive and less effective than the sensors: “A sensor detects the radiation at all times, no matter why it goes up or down, the cameras sometimes do not perceive weak clouds or dust,” Torres explains.

If in the future the roofs of the houses have solar panels, such a model will allow to calibrate their capacity

In addition to the plants, if in the future the roofs of the houses have solar panels, such a model will allow to calibrate their capacity. Electric companies will know how much electricity each group of plates can count on. “The wind power plants already spend a lot of money in predicting how much electricity they will generate and, if they don’t comply later, the electric companies can fine them,” says Torres. When there are thousands of plates in a city, knowing the radiation that each roof will receive in the next few hours will be essential for the electrical ones.

The nowcasting is one more product of the explosion of big data about four or five years ago. The reason for its emergence is twofold: one, the progressive availability of databases, such as radar images, satellites or sensor values. Torres’ original investigation was done with open sensor data from the Hawaii airport. And two, because of the increasing computing capacity of computers. All that allows the models of machine learning improve and be able to produce more refined results.

The prediction is not yet unbeatable. Google still has no deadline to take your nowcasting of rains to an application for users. You must adjust it and calculate behaviors in other places so that it is global and not all over the world there are good photos of its clouds. But it is clear that innovation has specific purposes hitherto unattainable.