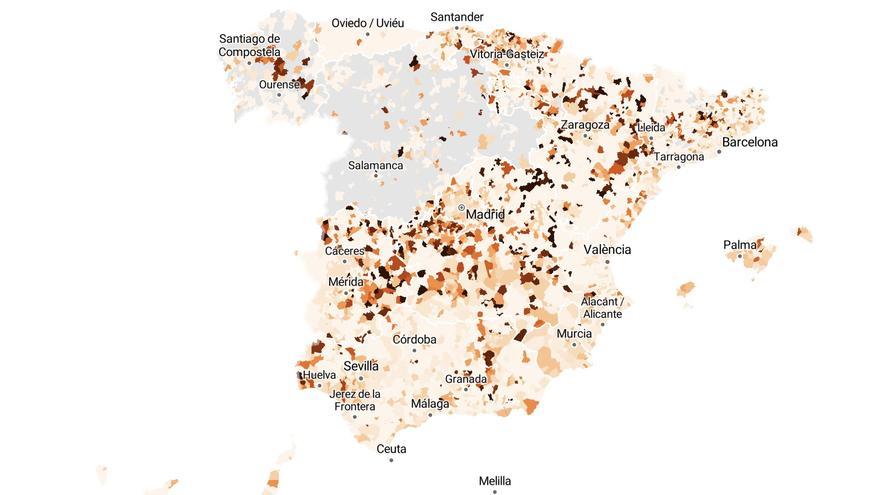 * Information updated with the latest data available as of September 14.

In the last official week of the summer and with the new course at full capacity, the decline in infections from the fifth wave is consolidated and Spain is heading towards ‘normality’. Half of the large cities (88 out of 175) have incidence rates of less than 100 cases per 100,000 inhabitants in the last 14 days. A good trend that coincides with the figures of the vaccination campaign, which already reaches practically all age groups: 75% of the population has the complete schedule of the COVID-19 vaccine.

The rapid decline in infections is widespread throughout the country and is also affecting large cities. Only Talavera de la Reina (Toledo) and Puerto del Rosario (Las Palmas) still experience a slight increase in cases. Talavera de la Reina is also the one that heads the ranking of cities with the highest incidence rate, with 479 cases (the data for Castilla-La Mancha are published more than a week late). They are followed by Vic (359) and the autonomous city of Ceuta (302). All the others are below the 300 cumulative incidence cases in two weeks. Furthermore, less than 1% of the population lives in localities where there are more than 500 cases.

At the opposite extreme, Oviedo (Asturias), Telde (Las Palmas) and La Orotava (Santa Cruz de Tenerife) are the large towns that are already in a normal situation, with less than 25 cases per 100,000 inhabitants in the last two weeks . Likewise, there are 14 other cities where the incidence does not exceed 50 cases either. These are some of the results extracted from the analysis carried out by elDiario.es based on data from the Health Departments of the 17 autonomous communities and the autonomous cities of Ceuta and Melilla. You can read more details about obtaining this data in the methodology.

At a global level, confirmed cases of COVID-19 are decreasing 📉 in 1,622 municipalities where 85% of the Spanish population lives. They are only increasing 📈 in 252 localities where 4% of the population lives and they are in the plateau phase (they remain more or less the same as two weeks ago) in 71, where 1.5% live. The rest are very small municipalities where very few cases are registered – less than 5 every two weeks – or for which there is no information available – which represent less than 11% of the Spanish population.

The data for each municipality show the same variable: the number of people who have tested positive for coronavirus and for whom their place of residence has been identified. Most communities include the data of positives by PCR test, antigen test and some also add the cases confirmed by rapid antibody test. This medium, which has been collecting data by municipality since the end of March 2020, calculates the trend of cases in each municipality by comparing the number of confirmed cases in the last two weeks with the infections detected in the previous two weeks.

In total, the figures collected add up to four million cases of coronavirus in which the municipality of residence of the infected person has been identified. Of the 17 autonomies analyzed, Madrid is the city with the most infected detected in a single municipality. However, the municipalities with the highest incidence rate (cases per 100,000 inhabitants) are small localities in which an outbreak can affect a larger proportion of the population.