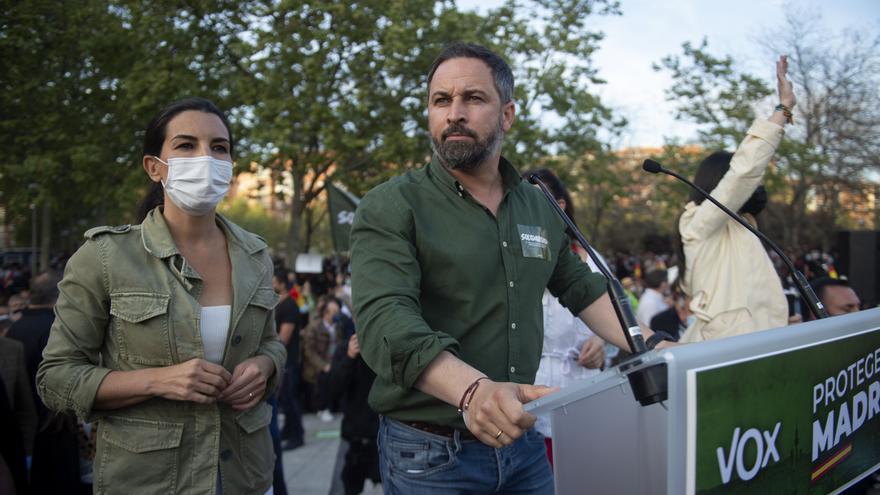 The president of Vox, Santiago Abascal, has participated in the event held by his party to commemorate Labor Day. In his speech, he stressed that “finally, a first of May in which all workers in Spain are represented”, alluding to the Solidarity union, created by the extreme right wing. Abascal has charged against CCOO and UGT, whom he calls “corrupt union duopoly”, but also against CEOE. “The workers are not represented by that employer’s association with managers who have not undertaken anything,” stressed the national deputy.

“It is good for unions and employers’ organizations that do not represent either employers or workers,” said Abascal, who has criticized that the unions “are the stewards of power while the Spanish suffer.” In his speech, he has included the party’s agenda that questions the safety of the streets, criminalizes immigration, ridicules feminism or questions climate change. The president of Solidaridad, Rodrigo Alonso, has also had an influence on linking the Vox program with the union struggle. “The homeland is the only defense that the workers have,” Alonso pointed out. An argument that Abascal later repeated at the lectern, highlighting that the homeland “is mainly the patrimony that the workers of Spain have.”

Taking advantage of the Madrid electoral campaign, Abascal has continued with his speech against the formations that are in charge of the central government. The president of Vox defends that “illegal immigration” has become a “reserve army of the left” because “a part of the bosses demands more migrants to lower wages” and “the unions and the left serve it on a platter ”, Thus avoiding” that people can have a future. ”

For the leader of Vox, the requirement of parity in the work centers “is stupid.” “If in the board of directors they have to be all women, that they are; if they are all men, that they are. They must be the best,” he added. Continuing with her criticism of feminism, she has stressed that for the left the president of Banco Santander, Ana Patricia Botín, is “a poor oppressed woman” and a “mechanic who has, the poor man, a poster in his workshop is a heteropatriarchal male chauvinist” .

In a campaign in which Vox has agitated its speech against immigration and unaccompanied foreign minors, against whom it has even placed a poster at the Cercanías stop at Puerta del Sol, Abascal has defended that the “elites globalists ”speak in favor of“ multiculturalism so that Spaniards have to compete with the reduction of salaries by comparing with the human trafficking mafias, demanding the elimination of Ceuta and Melilla and supporting the saturation of the centers saturated with ores, which have destroyed the safety in the streets ”.

The president of Solidaridad, Rodrigo Alonso, began his speech by highlighting that they are going to “defend themselves against the union mafia.” The Workers’ Commissions and the UGT have been the focus of their criticism, but they have also charged against the CEOE president, Antonio Garamendi. “It has become one more pawn at the service of the Government of the day,” Alonso stressed, “it has the same agenda as CCOO and UGT.” The president of Solidaridad has come to address the leader of the employer as “Antoniño”, to whom he has also sent another message: “Those 300,000 euros that you charge a year, do not forget that it comes from the sweat of the workers that you betray.”

Regarding the concentrations held by the trade union organizations on May 1, Alonso has assured that they are “demonstrations of paripé”. Before the speech of the rest of the workers’ representatives, he stressed that his message has not been heard before: “That the commercial treaties that produce with slave labor and in which the rights of workers are violated be repealed.” In his speech, he insisted on the need for food to be grown in our country. Alonso assures that the “farm to table slogan” is very good, but he has asked himself “where is it in Murcia or in Morocco?” “We want our farms in Spain”, Alonso pointed out.

The representatives of the far-right party have claimed in public events held in working-class neighborhoods throughout the campaign that their formation will be on the street on May 1, “disputing the false representation of the workers on the left.”