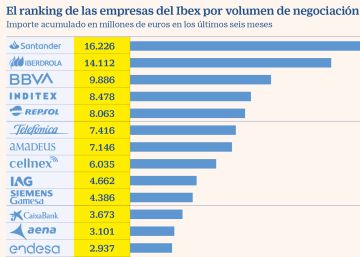 The flight of talent in the Ibex due to takeover bids has been more than remarkable in the last three years. But Naturgy’s trading volume on the Stock Exchange protects the gas company from abandoning the benchmark index of the Spanish market. With the data of the last six months, although the amount of what moves decreases by 22.69%, the percentage of the capital to which the partial offer of IFM is directed, the company chaired by Francisco Reynés would continue to be one of the 35 securities most traded.

There is much left to play, but the initial intentions of the Australian pension fund are for Naturgy to continue trading even if its takeover is completely successful. At least for the moment, it has no intention of promoting its exclusion from trading, as reported to the CNMV last Tuesday. Sources familiar with the operation even point out that IFM’s wish is for the utility to remain the benchmark par excellence on the Spanish Stock Market.

Trading data from the end of July support this thesis. Naturgy was the nineteenth value in this ranking, with an accumulated in the period of about 2,400 million euros, according to Bloomberg. Just below Sabadell, with just under 2,600 million, and almost tied with Red Eléctrica, which exceeded 2,300 million (see graph).

In a calculation without taking into account other possible circumstances and with these figures, a reduction in the amount traded on the stock market equal to the percentage that IFM wants to buy would yield more than 1,800 million euros in volume. Despite everything, clearly above 12 other values.

The company is now the 19th most traded security

Assuming that the success of the takeover bid was absolute, the capital that would be freely tradedfree float) of Naturgy would be, in principle, reduced to just over 7%. For this to happen, it would have to happen that practically all 75,000 minority shareholders attend and that Criteria also decides to divest itself of a part of its current package, equivalent to 24.8% of the capital. If there is finally apportionment, Fundación La Caixa’s holding company would be left with a percentage that would range between 17% and 18%, as published by CincoDías last Friday. The share closed the week at 21.31 euros, so that the premium compared to 23 euros offered by IFM in its tender is close to 8%. The market continues to believe in the success of the operation –before it was announced, it was trading at around 19 euros–, but there are still milestones to be completed.

The effectiveness of the takeover bid is conditional on accepting owners of 17% of the securities; in this scenario the free float of Naturgy would exceed 12%. Now it stands at 29.7%. 21.7% is in the hands of classic investment and pension funds, but hedge funds and other institutional funds also participate. The remaining 8% is in the hands of small investors, according to the company’s public documentation.

Since 2018, two companies have left the Ibex, after being the targets of their respective takeover bids. Abertis stopped trading and the last to leave the selective, and the Stock Market, was MásMóvil. Dia left the selective together before the Letterone takeover. But there is one case that serves as an example of what can happen at Naturgy: Endesa.

The utility unleashed a bidding war that started in 2005, when Gas Natural, the old name of the current Naturgy, launched a 100% offer. Then Germany’s Eon came into play, and the process dragged on until the end of 2007, when Enel and Acciona took control. The company, although it was left with a free float lower than 8%, remained on the Ibex through thick and thin. Endesa is one of the founding members of the selective, it only left it at the end of 2013 to return in just 12 months.

There are still months to go, about six, until the Naturgy case is solved. IFM has, first of all, to obtain the approval of the Government to its takeover bid, for the shielding imposed in March 2020. Afterwards, the CNMV has to give the blessing to the brochure and see the acceptance. To date, the Australian fund has not asked the supervisor to admit the offer for processing. He has about three weeks left.

If the operation comes to fruition, the usual procedure is for the committee of wise men that decides the composition of the Ibex to announce that Naturgy will abandon it once the acceptance period has concluded. When the official accession results are known, the Sanhedrin will meet in an extraordinary way to decide if the firm continues or if another company is admitted to the Ibex.