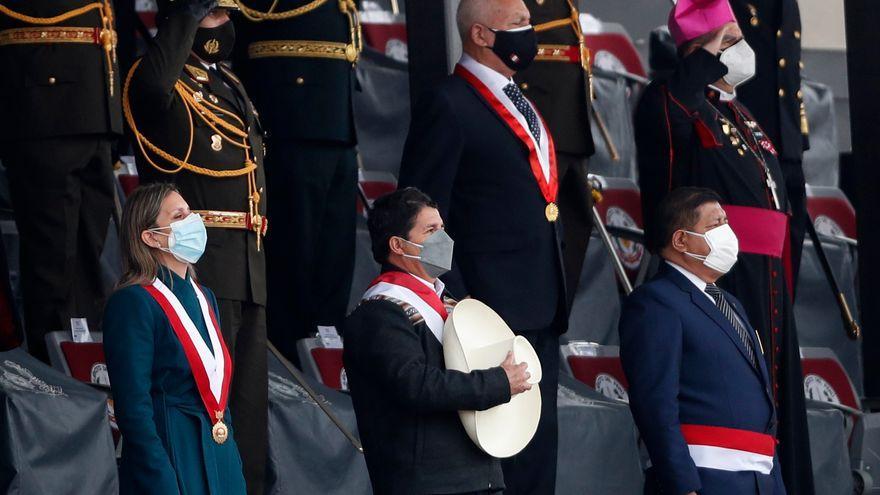 It was one more reception, the kind that are held by dozens in the Congress of Deputies. Courtesy meetings that pass without pain or glory in the parliamentary chronicles. But the recent visit of the president of the Congress of the Republic of Peru, María del Carmen Alva, to the Spanish Congress of Deputies, has opened an unprecedented crisis between the parliaments of the two countries. The trigger was the publication, by the Peruvian magazine Hildebrant in his thirteen, from an audio in which you can hear the deputy of the PSOE and secretary of the Foreign Affairs Committee of Congress, Noemí Villagrasa, show her discomfort at the intervention that Alva made during her visit to the Lower House and, specifically, in the aforementioned commission that was held on December 2.

This newspaper has contacted the Socialist Parliamentary Group requesting to speak with Villagrasa to try to confirm those statements and obtain more details, although the PSOE has refused to make any kind of assessment. But up to three different parliamentary sources, from three different political parties - who do not want to identify themselves due to their determination to maintain parliamentary decorum and respect for the Peruvian delegation - have explained to elDiario.es that what happened in the Foreign Commission in the past Day 2, during the meeting with Alva and the rest of the Peruvian delegation, "never" had happened in similar meetings with other countries.

According to these sources, Alva gave a speech of about 10 minutes that was exclusively aimed at "discrediting" and "delegitimizing" the newly elected president of his country, the leftist Carlos Castillo, who last Wednesday emerged victorious from a motion of censure against he precisely in Parliament chaired by Alva herself, who is a member of the Popular Action formation, who did not support said motion.

But three of those attending the meeting between the president of the Congress of Peru and the Foreign Commission of the Congress maintain in conversation with this newspaper that, at the meeting, Alva assured, with the following words, that in Peru "the Executive wants to close the legislative "through a" self coup ", or that Castillo is a" government of terrorists "and" of uneducated. " "It is totally false that he has requested or made any mention against President Pedro Castillo," she assured on Saturday, in statements to Radio Programs of Peru, after the audio of the socialist deputy was known and the content of her intervention began to be revealed .

But as a result of the leaks of the words of the president of the Peruvian Congress, the Andean deputy Guillermo Bermejo, from the most radical sector of the ruling party Peru Libre, has filed a request for a motion of censure against Alva, which he accuses of "destabilizing the country" after his recent trip to Spain.

In that meeting in the Spanish Congress, which took place in the context of the 143rd Assembly of the Inter-Parliamentary Union in Madrid two weeks ago, the president of the Foreign Commission of the Peruvian Parliament, Fujimorista Ernesto Bustamante, a supporter of the leader, also intervened. extreme right-wing Keiko Fujimori, the loser of the last presidential elections against Castillo - although, according to the sources consulted, he did so in a more moderate tone than Alva.

"We all left quite shocked by what was transferred there. In no case were the usual terms of a meeting of this type to which people generally speak well of your country, regardless of the ideological positions you have, and not to express terms of democratic questioning of it ", said this weekend the deputy of United We Can and vice president of the Foreign Commission of Congress, Antón Gómez Reino, in statements to the Peruvian public television Tvpe, asked about the intervention of the President of the Peruvian Chamber.

The sources present at the meeting on day 2 consulted by this newspaper maintain that Gómez Reino's intervention in the aforementioned forum took place in the same terms, showing himself "shocked" by Alva's words, which according to the deputy of the confederal group was " of partiality "and a" lack of respect for the institutions "of his country.

The fujimorista Ernesto Bustamante maintains, on the other hand, that the words of Gómez Reino were an attack on his country. In a letter sent on Sunday to the president of the Congressional Foreign Affairs Committee, the socialist Pau Mari Klose, the far-right parliamentarian points out that the leader of United Podemos "interrupted" Alva and "expressed judgments in an evaluative and contentious tone."

"After we returned to Peru, Deputy Gómez Reino has offered multiple statements to the media (...) attacking the president of the Peruvian Congress, falsely accusing her of having requested support to remove the President of the Republic and of having called illegitimate the Government of President Castillo and other falsehoods, "he adds in his text. In the letter, Bustamante maintains that "it is known" that Gómez Reino "has received Chavista monetary support" (sic) and denies that Alva spoke those words against Castillo.

However, another of the deputies present at the meeting, the leader of Vox Víctor González, openly acknowledged, in another interview on Tvpe, that the president of the Peruvian Congress explained "how despite the fact that some of the ministers did not like them because of the criminal records that they had, or were corrupt, or associations with terrorist groups, they had still voted in favor [de la investidura de Pedro Castillo] so that there would be governability "at the time.

The controversy also takes place, just a few days before the Foreign Commission of Congress debates and votes on Thursday predictably - in the absence of the order of the day being made official - a non-law proposal registered by United We Can to recognize legitimacy Institutional of the Peruvian Government. Bustamante believes that this initiative "seeks to treat the Republic of Peru as if it were a colony and not a sovereign nation."