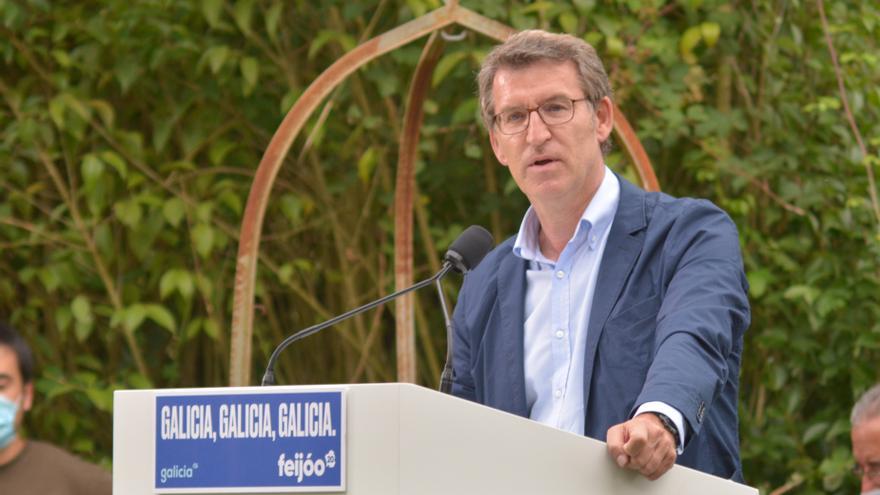 Presidents of table to meter and a half of the vowels, masks, dispensers of hydroalcoholic gels next to the ballots, booths without curtains, marks on the ground to avoid crowds and even tents that will serve as an electoral college. Voting in times of a pandemic has these things, plus many others. The virus has dominated our lives, politics and even electoral processes, but what does not seem to change is the sign of the Basque and Galician governments.

The elections this Sunday will be the first that Spain will hold under the impact of COVID-19 and, although the polls rule out a turnaround in both communities, it is perceived fear of low participation as a consequence of the outbreaks detected in both territories. In the last week the uncertainty about the results has increased. Not so much as to change the color of the governments, but so that those who come out as “favorites” – the PNV in Euskadi and the PP, in Galicia – hold their breath until the last minute. Much more Alberto Núñez Feijóo than Íñigo Urkullu. Not in vain or the PP candidate wins by an absolute majority – which would be his fourth – or he will have to leave the Xunta before the impossibility of weaving any alliance with the rest of the parliamentary arch. It is enough for the Lehendakari to join with his PSE partners to reissue the current government coalition, and that does not seem to be in doubt.

so yes forecasts are confirmedThere will be few surprises tonight, as Fejióo and Urkullu would obtain absolute majorities. The Galician, alone, and the Basque, as now, in alliance with the socialists, who would improve their brand of four years ago, although they would continue behind EH Bildu, who would also advance compared to 2016.

In Euskadi, the PP and Citizens alliance in which Pablo Casado was engaged against much of the game, it would suffer a serious setback, according to the latest demoscopic data, while the PNV could equal or exceed the 32 seats it achieved in 1984, its best record. There is no forecast that Unidas Podemos will improve its results four years ago. Rather the opposite, which would undoubtedly force a reflection by the national leadership, which in this campaign aspired to an improbable alliance of the left with the Socialists and with Bildu to remove the PNV from the Lehendakaritza. A scenario that even if it were to occur would be strictly mathematical because the PSOE has already ruled out addition as an alternative. His bet is to renew the agreement with the Basque nationalists.

Núñez Feijoó, who Polls Forecast Unquestionable Win. Some say that with a couple of deputies more than the 41 that they currently have, and others say that a couple less. In any case, a result more than comfortable and above the 38 deputies who grant the absolute majority and that would allow him to set himself up as a model to follow within a PP in which not everyone agrees with the strategy of confrontation and permanent excitement deployed by Pablo Casado.

The only unknown in Galicia is whether the PSdG will recover the second position at the cost of the sinking of Podemos, which could lose more than half of the 14 deputies it achieved four years ago or it will be the BNG who benefits from the debacle of Pablo’s Churches. Neither Ciudadanos nor Vox would obtain representation in the Galician Parliament. The liberals will only save face in the Basque Country thanks to their entente with the PP because, despite the failure of the alliance, they would sit for the first time in the Chamber of Vitoria.

No matter what happens, the PNV in the Basque Country and the PP in Galicia cross their fingers so that the epidemiological situation does not worsen, and therefore Galicians and Basques decide massively to stay at home for fear of contagion and a turnaround occurs in principle unexpected . Hence, in recent days they have dedicated their interventions to convince the electorate that going to vote this Sunday poses no danger, If not the opposite. If Feijóo has gone so far as to say that going to an electoral college is as safe as buying from a pharmacy, Urkullu has compared it to going to the beach. Five more minutes of campaigning and they would have been able to defend that voting this Sunday generates antibodies against COVID-19.

These are, in any case, particular choices. For security measures, for outbreaks, for fear of being infected, because Those who present symptoms of the disease in the Basque Country have been deprived of the vote and because what is at stake is not only the composition of two autonomous parliaments, but whether or not the management of the health crisis by the Pedro Sánchez government will have an impact on the results.

There is a national reading that nobody escapes and that has derivatives in all parties. Hence, Pablo Casado has tried to give the results a state projection as if the elections were a preview of the general elections for which there are still four years left. Its purpose is to make the elections a kind of quick test on the Prime Minister that penalizes Sánchez for his management of the crisis.

Whether the ballot boxes will judge the government’s management in the face of the emergency is not clear, although the PSOE is convinced that it has passed the examination, that the epidemic is under control, and that COVID has also revealed two very different models of managing crises: that of the PSOE and its purpose of “leaving no one behind” with social measures to protect the most disadvantaged and that of the PP, which the citizens were able to verify in 2008, which is that of “save yourself who can”. This has been its campaign axis and this will be the reading regardless of the results of its candidates in Galicia and the Basque Country. The examination, they defend in Ferraz, is not so much for the Government as for the autonomous presidents, despite the interference of the pandemic.

On the other hand, the PP assure that if the absolute majority confirmed by the polls predicted by Núñez Feijóo is confirmed, there are mediocre results for the PSdeG and an improvement in the number of PP deputies in Euskadi, together with the consolidation of the majority of the PNV to the detriment of the PSE, the voters will have endorsed the autonomous governments against “the Government of Spain, which would be weakened.”

No poll has drawn the scenario to which the PP aspires in all its arguments, except for Feijóo and his more than likely fourth absolute majority, which would mean a strengthening of the Galician, but also a weakening of the party model of the de Casado, García Egea and Álvarez de Toledo. The debate on the leadership of the president of the popular would be served and speculation about the national future of Feijóo would begin again, one of the barons most critical of the strategy of the national leadership.

If, in addition to a comfortable victory for the Galician PP, the resounding failure predicted by the polls for the coalition of popular and liberals promoted by Married with Arrimadas is added, tonight there will be barons demanding the assumption of responsibilities. And it will not be just Carlos Iturgaiz’s head that they ask for.

The Basque event therefore also has a crucial component for the future of Casado, not so for the Government of Spain or for Pedro Sánchez, since it supposes the first test for the coalition with Ciudadanos, in addition to an essay in the face of the alleged national refoundation of the right. A conjunction that the popular president longs for as the only way to return to make the PP a government party, something unthinkable as long as Vox maintains the percentage of national vote that it has today.

The truth is that the Basque PP + Cs candidacy led by Iturgaiz travels in the opposite direction from the one headed by Feijóo. It has perspectives equal to or worse than those of the defendant Alfonso Alonso, since he could lose up to 5 of the 9 deputies he has today.

And no one escapes that if Galicia represents the marianism and the management experience, Euskadi is nothing more than the ideological reserve of aznarism. Two souls who also measure this 12-J at the polls and who, depending on the result, will largely draw the immediate future of the traditional right, whose strategy has in recent times been conditioned at all times by the presence of Vox in the national board.

Precisely the party of Santiago Abascal is the one that in worse conditions arrives at these elections due to its lack of territorial implantation and the absence of powerful candidates. A cocktail that can break the successful electoral cycle that began for the ultra right with the Andalusians of 2018 and that placed him in the last generals as the third party in the Congress of Deputies, ahead of United We Can and Citizens. Tonight’s image, however, does not bode well for Vox, which in fact is satisfied with obtaining the minimum representation in both regional cameras. The polls do not give him a deputy in Galicia and neither in Euskadi.

We can try to make up your throwback

The forecasts are not too enthusiastic for United Podemos, which in the campaign has tried to mitigate its possible setback in both regions with its presence in the Government of Spain and the desire to be able to seal tripartites with the PSOE and with the nationalists. A scenario that, as has already been said, has rejected socialism in the Basque Country outright and that in Galicia does not seem viable given the expected results. Iglesias longs for agreements with Bildu and the BNG to weave a communicating vessel between the communities and Congress so that these alliances could give greater stability to a meager parliamentary majority Executive and incidentally turn Podemos into a kind of bridge between the nationalists and the PSOE for the configuration of agreements between the progressive left.

Inés Arrimadas faces several contradictions: that of going alongside the PP and the PP in these elections and that of being a circumstantial partner of the PSOE in Congress in everything that has had to do with the pandemic and campaigning against the socialists in Galicia and in Euskadi. To political schizophrenia of the leader of the orangesIn addition, the first elections as president of Ciudadanos are held in her two most adverse territories, two historical communities with a strong nationalist presence and where her presence is of little relevance because they have never been represented in Galicia or the Basque Country. And all while facing a convulsive internal crisis in which he tries to get rid of the remains of “riverism” that sank the brand in the last generals and tries to redirect the course to arrive at the center

So far the possible derivatives and readings of an anomalous choices. The results, in a few hours.