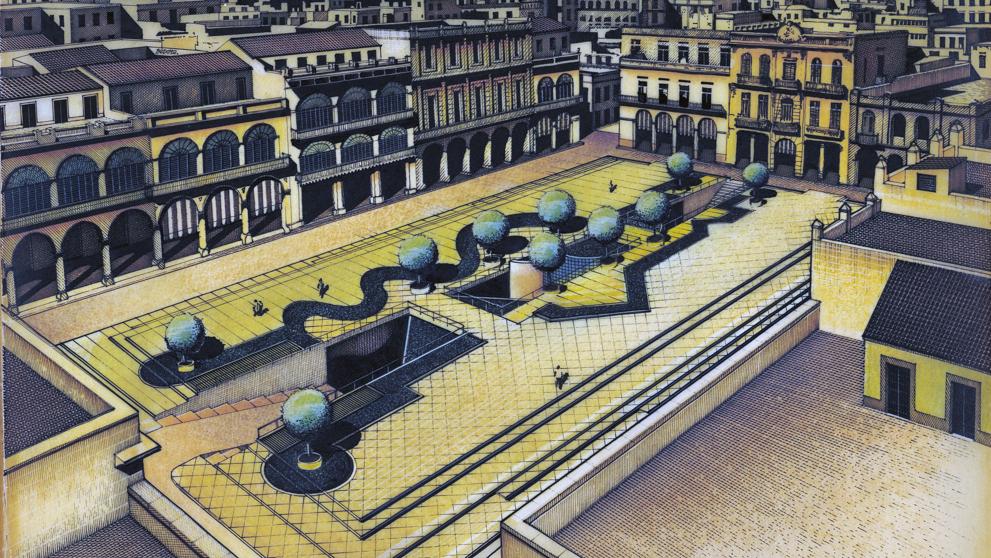 "The children of utopia". So the writer baptized Osvaldo Sánchez that first generation of Cuban artists and intellectuals born with the Revolution and educated in the schools of socialism that, in the eighties, burst forth without complexes on stage "ready to be granted a cultural contemporaneity in a country in which political contemporaneity had already been conquered by his parents, "says the essayist and curator Iván de la Nuez, who was one of those young people from whom he now rescues an episode that, unlike what happened in the field of cinema, music or the visual arts, had been submerged in a black hole in history: the dream of a Western architecture and without market.

The parallel utopia.
Dream cities in Cuba (1980-1993) is the title of the exhibition that returns De la Nuez to the Barcelona art scene ten years after its last exposition and he does it in The Virreina Center of the Imatge, of which he was director between 2000 and 2009. De la Nuez has counted with the collaboration of the architecture studio based in Paris
Atelier Moraleswhose founder Juan Luis Morales, participated in many of the projects that are shown and that cover more than a decade, from the exodus of Mariel, when more than 125,000 Cubans left the island in just seven months to the United States, until the dollar was legalized.

"We knew it was a utopia, that none of those projects were going to be built, but we had to make them," says Juan Luis Morales, who remembers that it was a collective utopia. The College of Architects had been closed and worked together despite being ignored by the socialist state, "the only one that, paradoxically, could have enabled the existence of a critical architecture projected on a human scale that rather than building buildings wanted to build cities and more than cities, citizenship ", adds De la Nuez.

Through eight chapters, the sample includes those projects that made them fly, such as the great opera that Fitzcarraldo projected the American Walter Betancourt in Velasco, a small town in the East, or the design of a beach (Tarará) that would end up welcoming the children of Chernobyl. The new architects also imagined a congódromo in honor of Chano Pozo; an art center inside a factory; a restoration of Old Havana, declared a World Heritage Site in 1982, that preserved and gave prominence to the barbecues, the popular architecture that Havana residents raise on the rooftops as an aerial city, or a new life for Guantanamo and Caimanera, headquarters of the US naval base, just when the fall of the Berlin Wall advocated the end of the Cold War also in Cuba.

Of another urbanism, not dreamed but real, speaks another of the proposals with which La Virreina renews its exhibition program (until October 20). It is New Angels, a photographic project that Jorge Ribalta has developed for thirteen years, between 2005 and 2018, on the transformation of the Plaza de la Gardunya, in the back of the Boquería market. There are 583 photographs that show the metamorphosis of this space of the Raval and its surroundings in chronologically inverse order, from the transfer of the former headquarters of the Massana school to the new building of Carme Pinós to the square that in 2005 still conserved its surroundings abandoned of the market where a community of sintecho lived.

Ribalta, with a look almost like an archaeologist, does not only deal with changes in the morphology of space but also with its public uses, from a traditional local commerce to mass tourism, and from its inhabitants, going back and forth from the past (the plaza arises from the demolition in 1880 of the old convent of Santa María de Jerusalén and takes the name of a secret criminal society, something like the Italian Camorra) upon the arrival of the students to the school of art and design or the first inhabitants of the new blocks of surrounding floors.