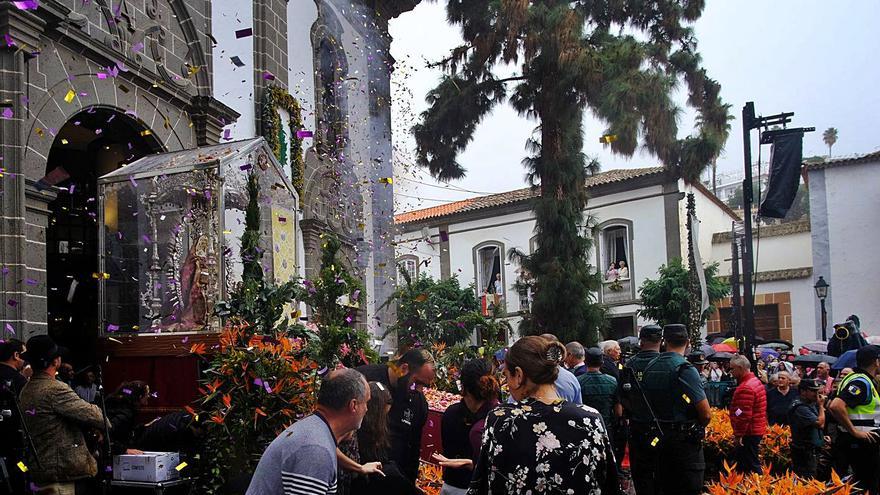 Since the beginning of the 20th century an infinity of articles, poems, conferences, proclamations have been appearing that, analyzed in their entirety, could be something like an “encyclopedia of the Pine” but, for obvious reasons of little custom or interest in reading of this type thematic; and even of the economic possibility of being able to acquire the books that will be published; these were very little known and quite sporadic in their appearance.

Loose data, fragments of chapters in books dedicated to other topics, small quotes from other quotes, references to documents in the midst of research or studies dedicated to other topics is what the dedication to the Virgen del Pino and its development in the Terorense and Canarian territory in general, are the only thing that a series of texts, protocols, chroniclers or researchers have brought us for more than three centuries, such as the Sinodales de Cámara and Murga of 1631; Francisco López de Ulloa with his “History of the seven Canary Islands” of 1646; Marín y Cubas in the “History of the Conquest of the seven Canary Islands” with its two texts from 1687 and 1694; Núñez de la Peña with the work “Conquest and Antiquities of the Canary Islands” of 1676; the “Topography of Gran Canaria” by Fray José de Sosa from 1678; the “Historical and Geographical Description of the Canary Islands” by Pedro Agustín del Castillo from 1737; Diego Álvarez de Silva with the “Description of the festivities of the Dedication of the Temple of Teror” in 1767; and Viera y Clavijo, Antonio Romero Zerpa, Isidoro Romero y Ceballos, Agustín Millares Torres, Álvarez Rixo, Domingo J. Navarro, Batllori Lorenzo, Eduardo Benítez Inglot, Sebastián de la Nuez Caballero, Andrés Hernández Navarro, Néstor Álamo, Ignacia de Lara, the Master José Marrero, Juan del Río Ayala, Luis Doreste Silva, Luis García de Vegueta, Florencio Rodríguez Artiles, the Pino proclamations since 1948, and so on.

The publications that started this bibliography dedicated exclusively to Teror, but with a very short circulation, were already in the 20th century those of Manuel Picar y Morales, chronicler of the Villa at the time, with his brochure entitled “To Teror, gratitude” and the Book “Teror” that Francisco González Díaz will bring to light in 1918. But both, of extraordinary lyricism and true documents of the vision that men like them could have of Teror, its characters, landscapes and devotions, were not true books of historical research and heritage site on Teror and Nuestra Señora del Pino.

The first book that fulfilled this premise came to us in 1927 with the “History of the Very Miraculous and ancient venerated Image of the Virgin of the Pine that exists in the Villa de Teror (Gran Canaria)” by the teacher from Teror José Miranda Naranjo. Small, full of memories, but already focused on the most serious investigation of the understanding and analysis of the reasons for being of what had happened in Teror since the 16th century.

Nine years later, a serious, insightful, interesting, documented, and instructive book joined this relationship. The “History of the Cult to the venerated Image of Our Lady of Pine, Patron of the Diocese of the Canary Islands” was published in 1936 by the Catholic Bookstore and Typography of Santa Cruz de Tenerife. Paradoxically, at a time of confrontation and controversies over the respective patronage of Pino and La Candelaria, it was a natural priest of the Villa Mariana and at the same time canon of the Diocese of Tenerife, José García Ortega, who led it forward. Despite the bibliographic contributions of the following decades and until the arrival of the one we are dealing with here today, the canon’s work was a permanent reference book for anyone who wanted to scrutinize a reliable history of Pino y Teror.

They would come later, in 1948 “The Tree of the Virgin (Pinus Canariensis)”, posthumous work of the also canon of Terorense Miguel Suárez Miranda; in 1955 the “Succinct History of the Canarian People’s Devotion to Ntra. Sra. del Pino, Patroness of Gran Canaria” by Sebastián Jiménez Sánchez and in 1960 the “Iconography of the Virgen del Pino” by the ineffable and always esteemed teacher José Miguel Alzola .

But the book that, without any detriment to those mentioned, meant a full stop in the bibliography on the Patron and her people was published half a century ago with all the conditions to become a book read, spread and known. Born of the joint authorship of the Terorense journalist Ignacio Quintana Marrero and the priest Santiago Cazorla León, with an impressive array of color photographs; Plans of the 18th century unpublished until then and an impressive accumulation of data until that moment almost ignored, the deep investigation of the journalist and the priest led many readers to the first study in which many people were interested and through which many of us learned about the future and the reasons for many Terorenses stories.

In 1971 this was a real impact on the religious literature of the Canary Islands.

In a conscientious campaign of propaganda impact, although it was to appear in the autumn; weeks before the theme of the different chapters had been anticipated, the prologue written by Joaquín Artiles or the structure based on prolix relationships of sources and documentary origins. The result of combining such different styles looked interesting but difficult, but it did nothing but increase interest in reading it. It affirmed that the many circumstances that accompanied its publication and the different moods of its authors carried with them “an unavoidable burden of risks and, firstly, the double risk of this tempting dilemma: or a rhetoric of enthusiasm that can stifle the precision of data, or a piled-up information, as valuable as you want, but difficult to assimilate ”.

But the authors knew how to do it well, perfectly combining lyricism and news; literature and research; “Abundant information and good saying” as it was aptly summed up.

Also Mario Hernández Álvarez, author of the extraordinary drawing that unfolds wonderfully on the dust jacket, wrote in those first moments of its dissemination and sale stating that its readers would find in the text an interesting material from the history of all of Gran Canaria since “ contemplating and analyzing a good piece of our endearing history from the top of a pine tree, already has, in my opinion, a great merit of balance, courage and devotion ”.

Néstor Álamo, emphasizing the stylistic differences and even the focus on Pino, from Quintana and Cazorla expressed that “the fiery and mirroring style of passion in their backgrounds, Latinizing” of the journalist at the same time as “the serene established erudition, very to the air of the XIX and of Franciscan iridescence ”of the canon.

Rumeu de Armas would say of the book that it was “of high historical quality. For me it has been a work of the utmost interest which I judge as valuable as it is complete … they know how to give documentary magnificence a lively and attractive presentation in all cases, a splendor that is always combined, on a higher plane, with prose fluid that takes the reader along the path of poetry in a skilful, simple, extremely rich way ”. The authors in their dedication recognized that Rumeu’s teaching and scientific solvency illuminated much of what appeared in the book. One dedicated it in red, another in blue; Even in that they were different, which was not inconvenient for them to write a masterful work.

Also for me it was a desired text, consulted and estimated in its proper measure since I saw it at the age of eleven on the shelves of the Pulido store – currently occupied by the Majocaya restaurant – until I could have it, read it, reread it, consult it and investigate it.

Likewise, you should celebrate this year’s Book Day and the commemorated anniversary by traveling through the wide geography of the same from the memory of Diego Henríquez, the one of the “true Fortune to the stories of Marquina or the Cistercian passing through the Pine, its lights, the Bajadas, the Patronage or the Pilgrimage.

They will enjoy and see the history of Teror with different eyes; those of a poet and a priest who wrote del Pino half a century ago.