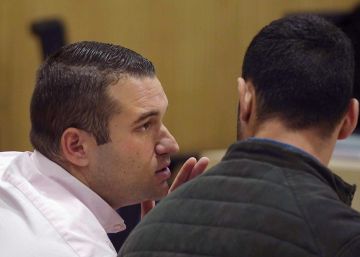 "I knew it, I knew it and nobody believed me." This is how he reacted the victim of Pozoblanco de La Manada when the agent of the Foral Police of Navarra spoke with her for the first time. It was through the phone. He only asked her if she remembered what had happened on May 1, 2016 and she burst into tears, according to the policeman during the third session of the trial that follows in Córdoba against four of the members of La Manada for an alleged crime of sexual abuse and another against intimacy.

This alleged case of abuse was uncovered during the instruction of multiple sexual assault of La Manada on a young woman in the Sanfermines of 2016. Investigators found in the mobile phones of the previous aggressors recordings, including that of the alleged victim of Pozoblanco.

In the day dedicated to expert evidence, the defense has tried to question the actions of the investigators, doubting that the judicial authorization to investigate the content of the videos and clarify what happened on July 6 and 7, 2016, When they perpetrated the sexual assault of the Sanfermines, it would include the review of videos from earlier dates. The lawyer of La Manada seeks cancel recordings in which Alfonso Jesús Cabezuelo, the military of the group is seen; Jesús Escudero, the hairdresser; Antonio Manuel Guerrero, the civil guard and José Ángel Prenda, touching the complainant's chest, while she is unconscious.

It is these facts and their subsequent dissemination in two WhatsApp groups by which they are judged. Without that proof, the cause against them falls apart. The Prosecutor's Office and the accusations -the one of the victim and the popular one of the Clara Campoamor Association- have endorsed that if a crime arises during the investigation of another, it must be investigated, just like the foral police who have given statements throughout this morning.

Among them was the agent who was commissioned to locate the victim and in which she, according to the testimonies, placed her trust since she only agreed to file the complaint against her alleged aggressors before him. The police officer was mandated to investigate the contents of mobile phones of those involved in the sexual assault of Pamplona by order of his superior. Among the video files he found the two recordings of Pozoblanco on May 1, 2016, only that when he accessed them by the format in which they were, he did not know where they had been taken or when. His boss, after informing the investigating judge of the Sanfermines case of the discovery of images that could be constituting a crime of sexual abuse, transmitted the orders that the magistrate verbally told him: to investigate the date, place and victim identity

With the metadata analysis, he arrived at the date and determined the place thanks to a geolocation system. It remained to look for the young woman. “Through social networks I did a tracking of parties that could be in the area, located the fair and looked in profiles if there are photos of there. I see that there is a disco with many images uploaded and I begin to analyze them until I see that there is one that could be the victim. I went to the local Facebook and through the likes, I found a profile with blocked access whose photo was similar to that of the girl in the video, ”said the policeman. Your superior, after consulting again with the instructor, transfers his authorization to contact the victim.

When he contacted the municipal police in Pozoblanco, he was fortunate that one of the agents knew the girl whose photo he showed. "I told him to give me my number to call me," says the researcher. "I remember perfectly when he called me," he said. The police officer told the young woman that she had found a video in which she could be involved. “I didn't tell him about his content, I just sent him a cut of a frame to identify if that day he wore the clothes that appeared in the image. ”

The agent has said that he could present the complaint wherever he wanted. She, according to her statement, was residing in Madrid at the time and did not want to file it in Pozoblanco because it was a small town. He showed his confidence in the Navarre Regional Police and agreed to meet with the investigator and another partner in a hotel in Córdoba. "I told him to take everything he would have taken that day," he explained.

In Córdoba, after receiving authorization from the investigating judge to move to a town outside Navarra, the investigator took photos of the dress he was wearing that day, the earrings and the watch and showed him photos of his aggressors to identify them. "I never showed him the video, first because he needed me to recognize the images and because I didn't see her psychologically prepared," said the agent. "At no time was he told that they were La Manada," he concluded bluntly.

Looking for the nullity of the video

The defense has tried to distort the performance of the Foral Police, a strategy necessary to obtain the nullity of the video. The order of the investigating judge ordered a comparison of the graphic material of the mobiles to reinforce the expert study of the videos of the Sanfermines of the accused. Given the questioning by the lawyer that it was necessary to review videos from previous dates to corroborate the identity of their clients, sufficiently demonstrated, in their opinion, with the photos and images they took of the sexual assault, the agents have explained that "there were partial images of slippers, penises and tattoos that had to be identified to complete the expert analysis." "It is not common to find other criminal acts while reviewing images, but it can happen and if it happens it is communicated to the judge," said one of the police officers.

After the statements of the coroner and the psychologist who treated the victim after having learned from the Navarre Foral Police what had happened to him, the court has seen, behind closed doors, the videos that the four young people took of the touching and which later spread on two WhatsApp chats, precisely the same day it was known the sentence to three years of jail and 5,000 euros of fine for Guerrero and Cabezuelo for recording the sexual assault of the Sanfermines. The sentence has flown over the entire session, in which, for the first time, the accused have had to be reprimanded by the judge for the gestures and comments they were making during the statement of one of the agents.