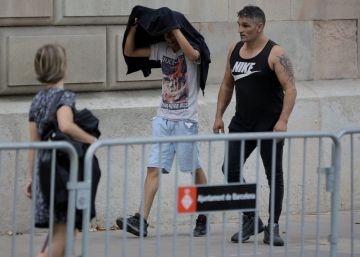 "I have flashes ". The victim of 17 years of the alleged sexual assault in a group in Manresa has declared this morning pulling diffuse memories of what happened that night, two years ago. He said that in the booth, Bryan told him that he had to fellate him and Cuba … "I had to do it because Maykel, Cuba and Bryan passed a gun, I felt intimidated," he said at the trial. in the Audience of Barcelona. "Other flash is that I was crying and had someone with glasses on. There were a lot of people getting laid. The next day I woke up at Melodi's house (one of her friends), unlocked my cell phone and Bryan called me telling me I was a whore and he fucked me all, "the victim continued, hidden behind a screen and accompanied by a psychologist. Three years after the aggression, he is still in therapy.

According to the story of the victim, interrupted on numerous occasions by her crying, she knew most of the accused "from other times in the factory". Bryan was known for having had consensual relationships with him a week before. "I drank more than four drinks, I was fine and I went to see my aunt, before I was kissing another child, Raúl, inside the booth," he assured. The young woman went with two of her friends (Santi and Melodi) to see her aunt to ask permission to stay longer at the party. When they returned, the girl recounts a first aggression when she went to the bathroom. "It hurt me", he declared "And I do not remember anymore". "There was a sofa, a table and flashlights and mobiles on," he said.

Last Tuesday, the seven accused denied the facts before the Audiencia de Barcelona. The prosecutor considers the facts, as has happened with La Manada de Pamplona, ​​the five men who raped an 18-year-old woman during the first night of the Sanfermines of 2016-, constituting a crime of sexual abuse, although the qualification can still be modified and elevated to sexual aggression.

According to the victim, that night he slept at his friend Melodi's house. Upon awakening, he told her that he suspected they had spilled some substance in their tubs. "He told me that the six of them had penetrated me and I was crying," he said. He went to his aunt's house walking, showered and went for the pill the next day. Three days later, he filed the complaint. "Bryan called me to ask if he could help me, he asked me to remove the complaint because he was getting his friends." "I was afraid because they have a gun." "It has affected me, I stopped studying, I was emptied, I needed therapy."

According to the prosecutor's brief, one of the defendants, Bryan, knew the girl. He knew that he was only 14 years old and realized that he was barely aware of his actions due to the intake of alcohol and joints. He took her to a nearby booth and there allegedly raped her. When he finished, he went to one of his friends, Walter, and encouraged him: "It's your turn, 15 minutes each. Then it was the turn of Daniel David, Maikel, Marco Antonio and Yordanis. The minor had already lost consciousness for many minutes. Ivan, instead of preventing the facts, masturbated watching the aggressions of his friends.

When they finished, Marco took a blank pistol, according to the prosecutor, and intimidated the rest of the children, who knew what had happened. "If someone says something, you will have problems with your family," he said while showing the gun and threatening to tell that the young people gathered there to smoke and drink. At 3:30, five hours after the party began, Bryan and Maikel allegedly returned to rape the girl.