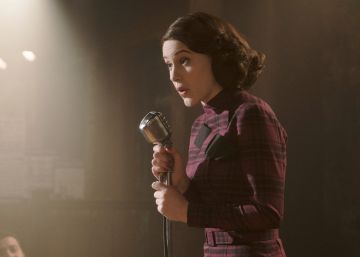 Of all the forms of loneliness, one of the most conscious and inconsolable is that of the artist in front of his audience. The writer with his new book, of course, but also the pianist who presses the first note of a concert, the actor who recites his text in a theater, the architect who inaugurates a building or the painter who receives visitors from his new Exhibition in a gallery. They may have been accompanied before that time, but from there they appear alone before the judgment of others. Or in the face of his indifference, which is worse.

The fifth chapter of the new season of The wonderful Mrs. Maisel (Amazon Prime Video), chosen by Natalia Marcos as one of the best episodes of 2019, talk about this loneliness with an unusual delicacy. The protagonist, who is beginning to succeed as a comedian, spends a night with her friend Lenny Bruce, who is her teacher. Of course, there is something romantic and sexual in the air, because they are two loners who understand each other, and love is made of those sparks of consciousness, but the vertigo they are dealing with goes beyond.

It is easy to understand it through a monologue comic because his job is to stage loneliness. A single actor, without decorated behind, faced the public in what seems more like a shooting than a function. There is something suicidal and irrational in that way of submitting to the public’s tumultuous judgment, which makes his show a tragedy.

My friend Edu Galán wrote a book about him stand-up which he titled precisely Die standing. In it he explored the meaning of the comic figure in American culture, and related it to the preachers, the medicine man and the charlatans of the old west. Mrs. Maisel is immolated every night like a vestal, and no one can help her in that daily death.

The best horror series to make you a marathon on Halloween