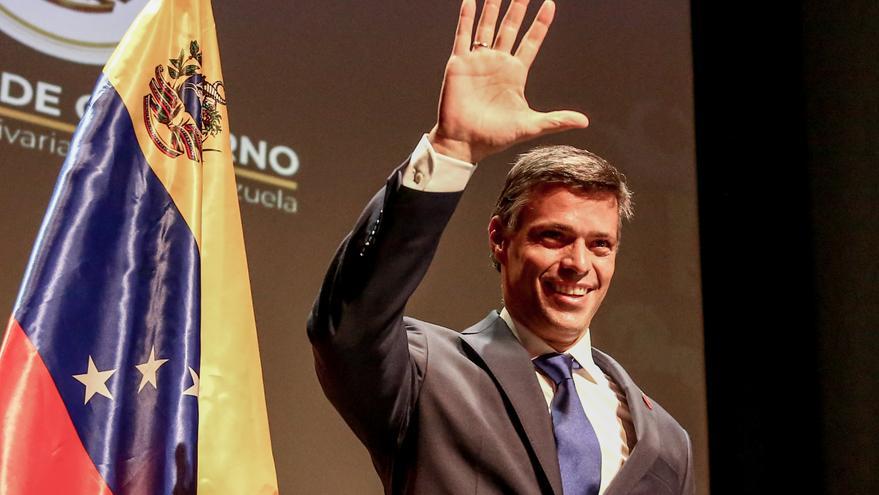 López has appeared in Madrid before dozens of journalists, in an act that has forced them to keep their distances for security reasons and protected by his parents, his wife and their two older children. He has referred to them on several occasions, in an intervention in which he has interspersed answers to questions with messages addressed to Venezuela.

They have been messages addressed to the democratic opposition, from which it has demanded unity; and the Venezuelan people, whom he has asked for “strength, faith, conviction and determination.” “We will come back”, he has proclaimed, citing the words of former president Rómulo Betancourt when he went into exile and assuring that he did not want to leave and that he has left “with a wrinkled heart.”

“We Venezuelans who are in exile say that we are going to return to Venezuela to liberate Venezuela and to build the best Venezuela,” he stressed, denouncing the situation in which the country finds itself as a result of the “totally wrong, erroneous, repressive model. and that today it is affecting the well-being of millions of Venezuelans and forcing more than five million “to leave the country.

As for his plans after leaving Venezuela, he has advanced that he will dedicate himself to “promoting and promoting the possibility of holding free, fair and verifiable presidential elections.”

Likewise, he has said that he will do “what corresponds so that those responsible for the human rights violations, torture and murders” that have occurred “can be brought to international justice” and to “seek all mechanisms to be able to alleviate the suffering “of Venezuelans and” guarantee humanitarian and economic aid. ”

In fact, he has advanced that among his first initiatives will be the promotion of European, American and UN sanctions against the “circle of Maduro”, the 56 people who appear in the report prepared by the UN Mission that denounced crimes against humanity .

He has talked about this with the President of the Spanish Government, Pedro Sánchez, who has asked that these sanctions be “a lever of pressure to be able to promote change in Venezuela.” I believe in these types of sanctions, “he said, warning that the EU “cannot turn a blind eye” to what is happening in Venezuela.

López, who has been presented as a “prisoner of conscience” as well as as commissioner of the Government of Juan Guaidó, has referred on several occasions to political prisoners, including the military, who are not allowed to visit their families or legal representation , and has also denounced that people very close to his family have been arrested as a result of his departure: “Maduro is a cruel repressive dictator.”

At the political level, he has argued that the path of dialogue has been tried in recent years in different ways and with the mediation of different countries, but it has not been successful. “It is clear to me that with Maduro it is very difficult to propose a negotiation,” he stressed, stressing in any case that he does not represent “the entirety of his party” and those who collaborate with his dictatorship.

In this sense, he has been resounding in stating that Venezuela needs a transition and that said transition “will have to include people who have been in the power structure of the dictatorship.” “If not, it cannot be a transition,” he stressed, recalling that this was the case in countries like Spain or South Africa.

“The problem for those in the circle that surrounds Maduro today is Nicolás Maduro, the dictator,” insisted the opposition leader, betting on doing everything possible to “isolate”, “put more pressure” and for the introduction of more sanctions.

In addition, he believes that “all tools must be used” to force the “dictator” to leave and he has bet, like Guaidó, to evaluate the doctrine of the “responsibility to protect” – which mentions the responsibility of the international community to protect the populations of a State when it is evident that it fails to do so. However, he stressed that he does not want “a situation of more suffering for Venezuelans.”

If sanitary conditions allow it, López intends to take his message not only to Europe and America, but also to other continents, to redouble the pressure on Maduro by seeking a coalition that unites all the defenders of democracy, without ideological colors.

In fact, he has expressed his desire to approach the Argentine government, which he has spoken to with Pedro Sánchez. And, asked about the elections in Bolivia, where Evo Morales’ MAS has just regained power, he insisted that free elections in which the will of the people is respected is precisely what Venezuela needs.

Despite his international protection, he has made it clear that his intention is not to create a kind of government in exile or to displace the axis of the opposition, but to contribute to the efforts of Juan Guaidó: “Let it be clear that there is an interlocution, the president Juan Guaidó and his team “.

In fact, he has also referred to the popular consultation promoted by the National Assembly to reject the parliamentary elections on December 6 inside and outside the country as an instrument to “unite” and “hope” Venezuelans. There will be those who criticize him, he has conceded, but in his opinion what does not fit is “to sit idly by.”

Just as at the end of 2018 the popular movement was “weak” and rose to support Guaidó, now it intends to awaken a new “cycle.” Thus, he has argued that if it is “useful”, it will continue to be relevant.

Along the same lines, he has indicated that he did not like Henrique Capriles’ movement to open the door to participation in the parliamentary elections of December 6, because it broke the unity of the opposition, but he welcomed the fact that he is already clear that those elections they are “a fraud”.