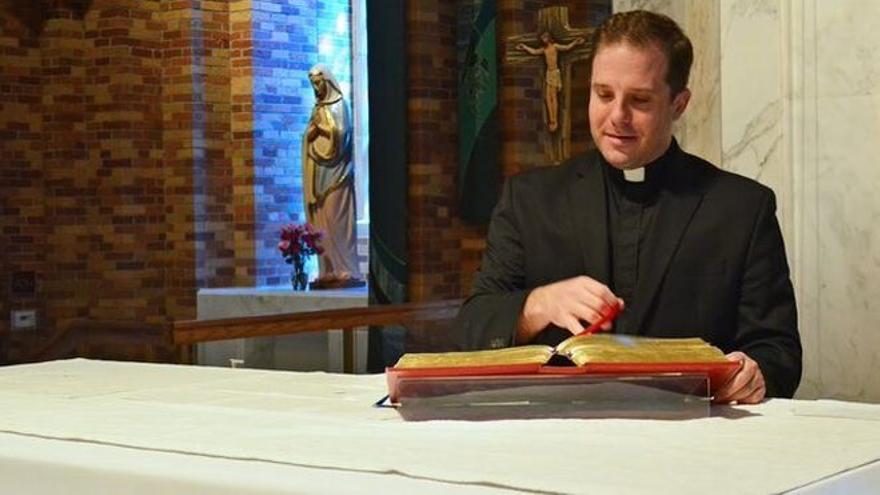 Matthew Hood is a young Detroit priest who was ordained in 2017. For three years, he baptized dozens of children in his parish, married hundreds of couples, consecrated thousands and thousands of hosts, forgave sins – even mortal ones – to countless of the faithful, and anointed the sick before dying. Three weeks ago, watching the video of his baptism (in 1986) he discovered, to his horror, that everything had been false. What happened?

The story could well serve to start an account of Agatha Christie, although in Hood’s case there are no murders, but a controversial decision by the Vatican, published at the beginning of August, and that could affect the ‘religious health’ of millions of faithful Worldwide. On August 6, the Congregation for the Doctrine of the Faith issued an ‘answer’, That seemed like a nuance, but that has thrown many batches of baptism to the ground. And it is that the baptisms in which the priest does not strictly pronounce the formula ‘I baptize you in the name of the Father, the Son and the Holy Spirit’, replacing it (as was frequently done, especially in the 80s and 90s) by the community ‘We baptize you …’ assume that the ceremony is not valid and, therefore, the child in question is not baptized. He is not ‘officially’ Catholic. Check out the video of his baptism, if you have it, and check it out.

The Vatican opinion, beyond a display of rigidity and orthodoxy far from the message of Jesus, who was baptized by his cousin John in the river, with no other ritual than that of immersion in water – at that time, because it did not exist, neither the Church nor Christianity existed – it could remain a mere anecdote … but not in the case of Matthew Hood.

Because the priest discovered with horror that, not being baptized, he could not be a priest. And therefore all acts carried out as such were invalid. Thus, sins had not been forgiven, the dying had not received the anointing of the sick, thousands of people had not received Communion for three years, children had not been baptized, marriages were not valid … a kind of ‘domino effect’ that has prompted the Archdiocese of Detroit to issue a note apologizing to the faithful and announcing an investigation.

At the moment, it is already known that the one who baptized Hood was a deacon, Mark Springer, now retired and who, according to the diocese, “used this invalid formula while assigned to the parish of Saint Anastasia in Troy, during the period 1986- 1999”. 13 years in which many faithful of the environment could be baptized (without being it). And that if we assume that only Springer was the one who used the ‘We baptized you …’. In Spain there were many priests who did it, especially among worker priests and the big cities.

What about the ‘non-priest’ Matthew Hood? The diocese arbitrated an “express” solution for the cleric, who in the same ceremony was re-baptized, received communion and was confirmed. After a brief retreat he was ordained a deacon and on August 17, ‘reordered’ a priest. But, what happens to the thousands of faithful who have been baptized, married, confessed by the ‘false’ priest? Are the tens of thousands of hosts that he consecrated valid?

The Archbishop of Detroit, Allen Vigneron, has sent a letter to the faithful of the diocese in which he is deeply concerned about the consequences that a “human error” can have on the “sacramental life” of the parishioners. “I will take all necessary measures to rectify the situation of all those affected,” he said.

Thus, the diocese has asked the faithful who passed through the hands of Deacon Springer and priest Hood to verify the validity of the received sacraments. Even, has published (in English and Spanish) a question and answer guide. What about the sacraments? In principle, it affirms all the baptisms presided over by Hood are valid (it is not necessary to be a priest, although Hodd was not even Catholic as he was not baptized), while the confirmations have to be repeated. In the case of marriages, the validity must be checked in each individual case. Sacramental absolutions after confession or anointing of the sick were not valid.

“I went to confession before Father Hood realized that I had not been validly ordained. Did I receive absolution for my sins through him?” Is one of the questions. “No, he did not receive sacramental absolution, which is the act of a priest during confession through which God grants the penitent forgiveness and peace. Since Father Hood was not ordained correctly, he was unable to provide sacramental absolution.” answers the diocese, which nevertheless declines stating that “God is not bound by the sacraments in the sense that He can and does extend His grace in a sovereign way.” In other words, that God forgives if he wants to, regardless of the existence of the priest or not.

“It should be noted that (Hood) acted according to the instructions of Christ, when he gave the priests authority to forgive sins,” so that those who confessed to Pastor Hood have received grace and forgiveness, but must to confess again. In any case, the Archbishopric adds, “if you remember any serious (mortal) sin that you had confessed to Father Hood before he was validly ordained and if you have not yet gone to a subsequent confession, you should take it to your next confession explaining to any priest what happened. If you cannot remember whether you confessed any serious sin, you should bring that fact also to your next confession. A later absolution will include those sins and give you peace of mind “, regardless of the seriousness of the confession.

Gran Canaria pays off a debt with Galdós, on the night of Antonia San Juan