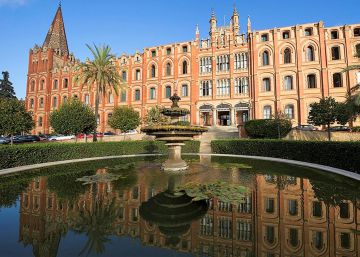 The Congregation of the Doctrine of the Faith of the Vatican has recognized the child abuse in the eighties of Pere Sala, a Jesuit who is 95 years old today and was a professor at Sant Ignasi School, in the Sarrià neighborhood, in Barcelona. After a canonical denunciation of two victims, two brothers, presented earlier this year, the internal investigation has concluded with a sentence that separates him from the religious ministry, as the Jesuits of Catalonia announced this afternoon. The penalty has, above all, the value of admitting the accusations and demanding a letter in which the victims are asked for forgiveness, because due to their advanced age, punitive measures have little effect. These measures prohibit the celebration of the sacraments, carry out apostolic and pastoral activities of a public nature, maintain treatment with minors, grant interviews to the media and have profiles on social networks, get in touch with the victims and absent themselves from the community in which resides without the express permission of the superior.

The case of the Jesuit school of Sarrià came to light after in December 2018 EL PAÍS dusted off the case of a teacher from that school, Lluis Tò González, who was convicted of abusing a child under eight in 1992, and revealed that he was transferred to Bolivia two months after sentencing. Two months later, two brothers told their case in The newspaper and filed a complaint against Tò and another Jesuit whose name appeared for the first time, Pere Sala. Tò had passed away, but Sala no. A canonical investigation was opened, which has now been concluded, but in the courts the judicial route was nothing because of the prescription of the crime, as has happened in all cases that address old accusations. Meanwhile, new complaints have emerged against at least four Jesuits of the Barcelona school between the 1970s and the 1980s.

However, the two brothers did not give up and have proved an unprecedented judicial process in Spain in the search for justice for child abuse: they have filed a complaint for omission of reporting a crime against the Jesuit officials of the time and institutions involved, both the Sant Ignasi school, the Society of Jesus and the Jesuïtes Educació Foundation. The key is that this crime does not prescribe and the complainants maintain that, in their day, in the school they knew the abuses of Sala, but they did not take measures.

The Catalan Jesuits have explained today in a statement on this complaint that "the Company respects the desire of the victims to exercise their rights and, faithful to their way of proceeding, will collaborate in all that is required by the judicial authorities." In that sense they express their "support for all victims of abuse" and their "willingness to listen and accompany them." "We deeply regret the suffering that some colleagues have inflicted on people they should care for and protect, we reiterate our willingness to clarify the past and possible cases of abuse committed in our centers," they say.

The Jesuits of Catalonia announced in December 2018, after the first investigations of EL PAÍS, that they would open a great investigation internal in their schools that would cover the last 60 years. It was the first Spanish Catholic institution to take this step. Last March they made a first balance: the order received emails from 19 people who reported abuse when they were students of their schools, 11 men and 8 women. In total, they accused seven Jesuits from four centers, half of which the order has in Catalonia. The most repeated name was that of Lluis Tò González.

In the absence of official figures or from the Church itself on the extent of abuses in religious institutions in Spain, the count of EL PAÍS, which includes sentences and news published in the media, indicates that so far 114 cases with more than 350 victims have come to light in Spain.

If you know of any case of sexual abuse that has not seen the light, write us with your complaint to [email protected]