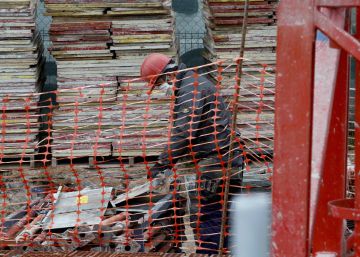 The Euribor had never reached such a low level. The index with which the interest rate of variable mortgages is calculated closes the September average at -0.412%, in the absence of data from Tuesday and Wednesday. This collapse, caused by the excess liquidity injected by the European Central Bank (ECB) to deal with the crisis, It translates into a reduction in the cost of both the loans that are requested now and the old ones whose annual review is due this month. In the latter case, users with a 30-year mortgage of 300,000 euros will save more than 100 euros over the next 12 months. Experts indicate, however, that the decline is about to stop.

In the early stages of the health emergency, the Euribor’s race to return to zero seemed unstoppable. Since -0.288% in February, the index passed in March at -0.266%, Y to -0.108% in April, until reaching -0.081% in May, a level that had not been recorded since December 2016. By representing the Euribor the interest rate at which they lend money to each other Some banks that are part of the panel of the body that manages it (the European Institute of Monetary Markets; EMMI, for its acronym in English), this index was affected by mistrust between entities. Fear of a possible deterioration in the banking system, determined by an eventual increase in non-performing loans, caused the Euribor to rise sharply in those weeks.

On the contrary, now “banks are trying to get all the liquidity that the ECB is offering them with extraordinarily favorable conditions ”, explains Joaquín Robles, analyst at financial broker XTB. “But the entities are unable to lend all that money, which means that they have a lot of surplus and are not interested in going to the interbank market,” he adds. The logical consequence is a Euribor in free fall and that already last month had surpassed – albeit by a little – its previous negative record, closing at -0.359%.

Thus, this index in September was 7.3 basis points below the level you recorded a year ago. In the case of a 30-year mortgage of 300,000 euros with an interest rate composed of the Euribor plus a differential of 0.99%, if in the last year the user paid a fee of 918.43 euros per month, now he will pay 909.59 euros, which means 8.84 euros less per month or, what is the same, a saving of 106.08 euros per year, they calculate from the bank comparator iAhorro.

The consequences of a Euribor installed in negative territory for more than four and a half years, and, now, at a new historical low, are also seen in fixed-rate mortgages, loans in which this index does not directly influence . “The margins of banks on mortgages, one of the products that gave them the most profitability in the past, are becoming increasingly narrower, and the beneficiaries are the customers, who are seeing how the entities offer them fixed rates of 1.5 % or 1.75% at 30 years, ”says Robles.

Along the same lines, the director of Mortgages of iAhorro, Simone Colombelli, predicts that “next quarter there will be an improvement in fixed rates, because more and more banks are betting on them in the face of a Euribor that refuses to rise” . Added to this is the closing of the year, a time when “entities take stock of their objectives and tend to launch better offers”, in the words of Colombelli. In fact, in the last five months, half of the entities have already been adjusting not only your offers regarding variable mortgages, but especially in the fixed ones. In this sense, “we see the most interesting changes in those entities that were poorly positioned in this product”, emphasizes this expert.

With the brakes on

The Euribor’s bearish streak, however, will not last indefinitely. On the one hand, it is true that the “complicated” economic situation derived from the pandemic “is going to take a long time”, according to Colombelli, who adds that “the ECB tries to boost the market and is using all its tools to do so.” In the last meeting of its Governing Council, “[la presidente] Christine Lagarde said that I had measurements prepared in the event that the weak recovery that we are seeing continues or if the euro continues to appreciate and generates trade conflicts ”, agrees Robles, therefore,“ the more the expansionary monetary policy measures are extended, the more likely it is to see the Euribor drill new historical lows ”.

However, on the other hand, Robles believes that the Euribor floor could be around -0.45%. The limit is in the ECB deposit rate, which is -0.50%. It would be absurd for banks to pay more to lend money to each other than they spend to store that same excess liquidity in the coffers of Frankfurt. “I think they will not reach this limit and will stop sooner,” predicts this XTB analyst.