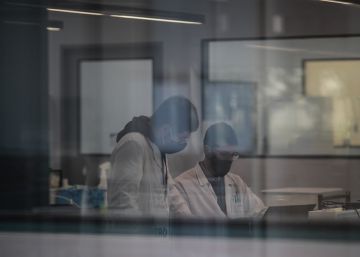 The only vaccine against SARS-CoV-2 that Spain currently has reserved, the one from the AstraZeneca laboratory, could be ready for health authorities to evaluate before the end of the year. This was pointed out yesterday by the research team of this company and the University of Oxford, which have one of the most advanced candidates in this race to find immunization.

“It is possible that if the cases are obtained quickly in clinical trials, we could have them available to regulators this year, and then there would be a process for a full evaluation,” said Andrew Pollard, director of the vaccine group at the University of Oxford on BBC Radio, collects Reuters.

The Ministry of Health announced yesterday that Spain has adhered to the centralized purchase of the AstraZeneca vaccine led by the European Commission, as had previously been announced by CincoDías. The Community Executive informed in the middle of the month an agreement to purchase 300 million doses from the British laboratory, extendable to another 100 million. As the department of Salvador Illa recalled, the distribution will be made equitably among all the countries that join the acquisition. That means that if, as is foreseeable, all countries place an order, Spain would have 31 million doses, to which another 10 million can be added. However, the details or the exact amounts of the distribution are still not known, although various sources suggest that Spain will indeed account for about 42 million vials.

Fast track in the US

AstraZeneca’s vaccine is in phase III human studies, the last stage before applying to the health authorities for marketing approval. It is one of the 31 candidates currently being tested in human trials, according to the World Health Organization (WHO). He is currently leading the race in competition with products from Pfizer, Moderna, Janssen (Johnson & Johnson group) or from China Sinovac.

After Phase III is complete and AstraZeneca collects medical information, in Europe you must submit the marketing application to the European Medicines Agency (EMA), which must review these studies. In the case of the United States, authorization is requested from its FDA counterpart.

Precisely, the study by the British laboratory made headlines on Monday when the Financial Times reported that the Donald Trump Administration is considering the possibility of accelerating the vaccine for use in the United States before the elections of 3 of November. That free way would be given through a shortcut justified by the health emergency. “The process of going through emergency use authorization in an emergency is well established, but it still involves having both carefully done data and proof that it really works,” Pollard said.

At the moment the amount that Spain and the rest of European countries will pay for the roads is unknown. The British laboratory assured that its vaccine would cost a few euros, ranking for the moment as the most affordable.

The Executive of Ursula von der Leyen also negotiates with other companies for more supplies, to which Spain may also join. The American laboratory Moderna advanced on Monday that it is in talks to supply 80 million vials, a figure that could be doubled. The Commission is also holding talks with the German company Curevac to buy 225 million doses. Add 300 million units from the Sanofi and GSK consortium and another 200 million (expandable to 200 million more) from Janssen.

AstraZeneca has started, apart from its research on the vaccine, a clinical trial with a new drug to prevent and treat the coronavirus, according to the company yesterday. It is the experimental drug AZD7442, based on a monoclonal antibody. The study involved 48 volunteers between the ages of 18 and 55 in the UK.

Some companies are exploring the way to use laboratory-created antibodies to defeat SARS-CoV-2, a route that has already been used against some types of tumors and autoimmune diseases. Companies such as Lilly, GSK, Amgen, Regeneron, Celltrion, Sab Biotherapeutics, Sorrento, Brill Bio, Yumab, Molecular Partners, Systinmune, Xencor, Atreca, Ossianix and Fusion Antibodies are entering this field against the virus.