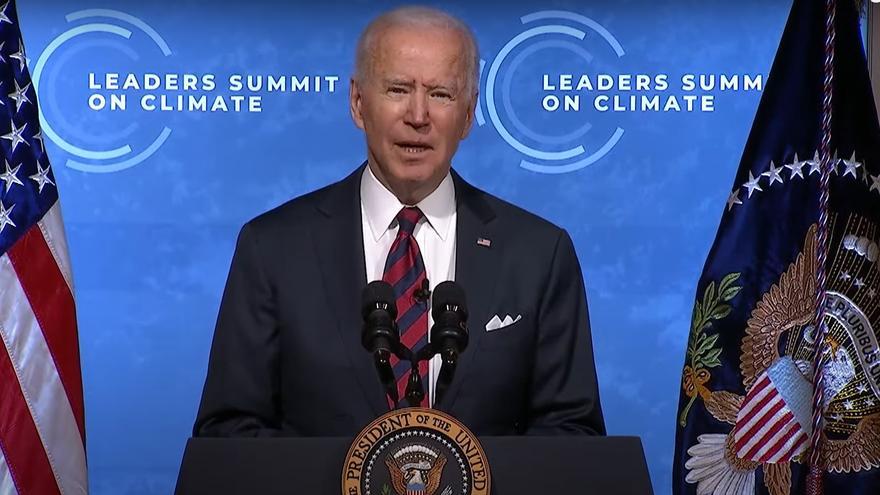 The US wants to retake a leading position in the fight against climate change, although its proposal to reduce the amount of CO2 it releases into the atmosphere has fallen somewhat far from the level set by the European Union or Great Britain. At the virtual climate summit convened by the US president, Joe Biden, his government has ensured that, in 2030, they will have reduced the emission by 52%, but compared to 2005 when their emissions were 20% higher than in the reference year chosen in Europe: 1990.

The importance of the year that the states choose as the base to, from there, cut the volume of greenhouse gases that they release, is that by 1990, the countries emitted less CO2 than in 2005, so more effort is needed to lower them and translates into fewer gases released into the atmosphere. However, the previous goal set by the US, in the time of Barack Obama, was to be 26-28% below 2005.

The US has put all the meat on the grill to stage its return to the global effort to try to combat climate change. In addition to President Biden, Vice President Kamala Harris and Secretary of State Antony Blinken also spoke at the inauguration of this virtual summit. The dome of the American cabinet.

Opening the round of interventions by heads of state and government, Joe Biden insisted that his country accounts for “15% of world emissions, no country alone has the solution. Science tells us that this is the key decade to make decisions that avoid the serious consequences of climate change and ensure that the Earth does not heat more than 1.5ºC. This reality is undeniable ”.

Its Vice President Kamala Harris has stressed the need for collaborative work: “We share the concern and the threats. No nation, no region, is immune to climate change. I urge everyone to focus on the communities hardest hit by the effects. The health of the community, workers and the economy depends on what we do now ”. Secretary of State Blinken has concluded after his bosses that “no country can act alone.”

The chained messages from the US leadership have marked a total turnaround on the US position during the four years of the Donald Trump administration that came to pull their country out of the Paris Agreement against climate change in 2015. The summit has played a role. a role of climate diplomacy Since, just after the interventions of Biden and the Secretary General of the UN, Antonio Guterres, the President of China Xi Jinping and the Prime Minister of India, Narendra Modi, took the floor. Both countries are at the top in the volume of CO2 emitted, but they are also two emerging economies that are regaining ground after decades of impoverishment. In other words, they are not the main historical causes of global warming.

After these interventions, Prime Minister Boris Johnson and Japan’s Yoshihide Suga took the floor, underlining the diplomatic power deployed by the US. Jonhson carried under his arm the update of his climate plan announced this Wednesday that aims for the United Kingdom to emit 78% less CO2 compared to 1990 in the year 2035. Then they spoke, in rapid succession and with very short speeches, the Chancellor German Angela Merkel heard the President of France, Emanuel Macron. The European Union had no news regarding new emissions cuts since it delivered its renewed plan to the UN in December, which is 55% CO2 reduction compared to 1990 in 2030. Then the Russian president, Vladimir Putin, who intervened. He has spoken that he intends to “significantly reduce” emissions without detailing and has pointed out the usefulness of betting on atomic energy to avoid releasing CO2 and the “absorption of gases”. With Putin the objective of a summit with all the fundamental actors was completed in a certain way, regardless of the content of their speeches.

Biden has stated that “this summit is a first step towards the Glasgow COP in November for a prosperous, safe and sustainable world.” At that meeting in Scotland, countries should have presented detailed plans to enhance their effort to prevent the Earth from overheating by more than 1.5ºC by 2100. So far, the UN has received documents from 75 parties covering a 30% of total emissions. The joint effect of those plans reduce those emissions by 1% by 2030. The UN scientists’ calculations are that, for that year, the cut should be 45%.