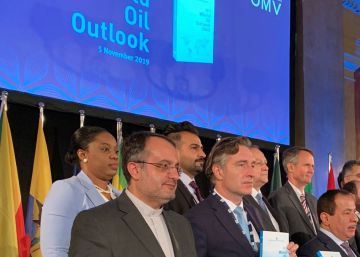 The energy ministers of the OPEC + alliance have ended the meeting held on Sunday, April 12 with an agreement to sustain oil prices, an agreement to which other producers, such as the United States and Canada, have joined for the first time. A cut in production of 9.7 million barrels per day has been agreed, putting an end to the price war started between Saudi Arabia and Russia and that, according to OPEC sources, may be double this amount when adding cuts volunteers inside and outside the cartel.

The reduction will run from May 1, and the deal ends several days of marathon meetings. The Brent price is trading with increases of 4% after registering strong fluctuations in the early stages of the day.

This pact marks the first coordinated response by producers to the Covid-19 pandemic, which has caused an unprecedented slump in global oil demand and has pushed prices to minimums in nearly 20 years. The collapse of demand was compounded by the Saudi decision to fire production in response to Moscow’s rejection of a pact last month.

The two powers, under the auspices of the United States, already reached an agreement on Thursday. The price rose to $ 32, but the parties were to close a definitive deal before the Asian markets opened on Monday.

“These production adjustments are historic,” said OPEC general secretary Mohamed Barkindo. “We are witnessing today the triumph of international cooperation and multilateralism, which are the core of OPEC’s values,” he said on his Twitter account.

The presidents of Russia, Vladimir Putin, of the United States, Donald Trump, as well as the Saudi king, Salman bin Abdulaziz, supported the agreement in a telephone conversation on Sunday. “The leaders supported the agreement reached within OPEC + on the voluntary limitation and gradual oil production to stabilize world markets and ensure the sustainability of the global economy as a whole, “the Kremlin said in a statement.

“The big oil deal with OPEC + is done. This will save hundreds of thousands of energy jobs in the United States,” US President Donald Trump wrote on Twitter. “It is a great deal for everyone!” The US and Canada will stop pumping some 3.7 million barrels

Barkindo added that the cut will actually be higher than in April. Thus, he explains that throughout this month more crude is being produced by the United Arab Emirates, Kuwait and his own country, and that the drop from May will be about 12.5 million barrels per day compared to this month. .

If we add to this voluntary cuts from other countries or from producers outside OPEC such as Brazil, some experts believe that the cut may be much greater. “From current production levels, total commitments to reduce production amount to almost 19 million barrels per day from May 1,” a source in the negotiations told the RIA Novosti agency.

Markets were expecting a pact to withdraw 10-15 million barrels per day from the market, that is, between 10% and 15% of last year’s average world production. In the course of the summit, even a reduction of 20 million barrels was considered. In the end, the reduction will only be slightly less than what was agreed last week. Mexico will cut production by 100,000 barrels a day, after having been the biggest stumbling block in the final stretch of the negotiations.

Moscow and Riyadh entered into an unprecedented oil war in March, as Moscow rejected the Saudi claim to agree to a production cut in the face of the coronavirus pandemic. Riyadh’s response was to shoot up production to put pressure on Russia, an excess supply that brought Brent to around $ 20, thus breaking OPEC + agreements (OPEC’s alliance with other producers like Russia).

In the United States, demand has fallen to 14.4 million barrels per day, the lowest level in a data series that starts in 1990, and more than 30% below pre-crisis levels. In India, the third largest consumer in the world, demand fell almost 18% in March, despite the fact that the country entered a blockade on the 25th. Normally the world uses about 100 million barrels a day, but some experts believe that it is consuming only 65 million, or even less.