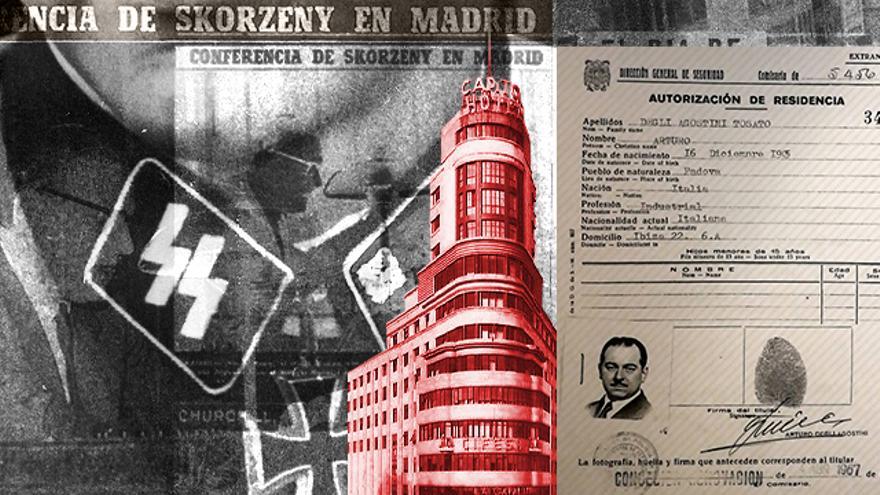 Otto Skorzeny received directly from Adolf Hitler the order to release Benito Mussolini from his arrest at the Hotel Campo Imperatore during the course of World War II. He was a colonel and a leading member of the SS and one of the symbols of fascism in Europe. He died in Madrid in 1975. Skorzeny was persecuted by the courts after the victory of the allies in the war and settled permanently in Spain in 1950, a "knightly country", he wrote in his memoirs, in which he had "loyal friends". who would help you upon arrival. This support served him to open an engineering company in the middle of Gran Vía that the CIA came to define as a "cover". Skorzeny, in reality, was devoting himself to political activity.

His is not an isolated case. Skorzeny was part of a constellation of fascists and war criminals who used Madrid as a refuge at a time when fascism was falling in Europe and Franco's dictatorship remained in Spain. This is detailed by the historian Pablo del Hierro, professor of History at the University of Maastricht, in the profuse article The Neofascist Network and Madrid 1945–1953, recently published in the magazine Contemporary European History from the University of Cambridge.

Using sources ranging from memoirs and personal diaries to archives from various countries and police and intelligence reports, the investigation reconstructs the network that turned Madrid into one of the key nodes of a broader transnational neo-fascist network. Dozens of Germans, Italians, Austrians or Croatians converged on the capital, where they not only found a safe place, but also a space to share ideas, meet, publish, organize events and rethink their strategies. An unknown part of history that was also rescued by the writer Almudena Grandes in her work Doctor Garcia's Patients.

The conversion of Madrid into an epicenter of the network was not sudden. "A priori it didn't seem like the perfect place because at first there was still an image of Madrid as the capital of anti-fascism, but this began to change after 1945," del Hierro explained to elDiario.es. Then several factors converged in the city: Germany and Italy already had some structures in place there, the fleeing fascists knew that the Franco regime would look favorably on them, and Madrid was an intermediate step on the escape routes to other countries like Argentina, Brazil, Syria or Egypt.

As Del Hierro has documented, the capital was a central node in three of these great thoroughfares, the so-called ratlines or routes of the rats, a system conceived by the fascists to flee from the justice of the allies. They functioned as informal networks of people who could move from one country to another, and in practice they helped them with money, clothing, accommodation, tickets and false documentation and identities. The war criminals, explains the historian, "were able to find refuge in several 'friendly' cities", including Madrid, which "already welcomed several prominent fascists sent by their governments during World War II to do business with the Franco regime" .

The first of the rat lines that was launched was the one headed by Arturo degli Agostini, owner of a popular ice cream parlor located in the center of the capital and who had been identified by the Italian authorities as one of the most active fascists. Once the war was over, he tried to reorganize the Italian community residing in Spain in Madrid, especially in the Chamberí district, but he also promoted a mechanism that aimed to "give shelter" to the fascists in Italy, the article narrates. Among them, Mario Roatta, former head of Mussolini's secret services who became director of the Hispano-Italian Commercial Society, stood out.

The person in charge of the second route was the member of the SS and businessman Johannes Bernhardt, who in 1936 supervised, by order of Hitler, the economic relations between Germany and the Francoist rebels. This earned him important relationships with the Spanish economic elites, with the upper echelons of the Franco regime and the Nazi party. He was also an informant for the Anglo-American operation SAFEHAVEN, which made him enjoy a "unique" position from his Gran Vía office by collaborating, once the war was over, with the allied authorities. But at the same time, he was maneuvering to help the fleeing fascists and in April 1945 he called a meeting in his house that officially created the rat line by Bernhardt. She was helped by figures like the German Clara Stauffer, who had worked for the Falange's Women's Section.

The organized system with which the fascists tried to circumvent justice had a third route in the capital to take the criminals to Argentina through Spain. It was started by Carlos Fuldner, an Argentine who had belonged to the SS and the Nazi party and who, according to the article, had the support of Argentine President Juan Domingo Perón. Others would later be added such as René Lagrou, leader of the Flemish SS, Radu Ghenea, Romanian ambassador to Spain, the writer Charles Lescat or Pierre Daye, journalist and member of Rexism, a Belgian fascist movement, and whose diaries have been used by Del Hierro as fountain.

The investigation not only reveals how the escape routes worked: it also details part of daily life in the capital. The extremists shared the same urban space, so it was not unusual for them to find themselves walking "through the main arteries of the center, the axis formed by Castellana, Gran Vía and Alcalá" or staying in a house or restaurant. Those facing the greatest economic difficulties frequented the cheap taverns on Calle Lope de Vega, del Hierro has documented; those with more resources used to dine in more exclusive restaurants like the Horcher, still open.

The presence of these fascists in Madrid had political implications, especially from the end of 1946, when the allies reduced the pressure on them. Pursuing them is no longer a priority because the international board is beginning to be marked "by tensions with the USSR" and the idea of ​​fascism as an enemy is being abandoned, says Del Hierro. This new circumstance made those who were hiding in Madrid begin "to feel safer" and the capital to become a place where the extreme right could become politically active again as the epicenter of a broader network formed by Rome, Lisbon, Buenos Aires, Cairo or Santiago de Chile.

"The active tolerance of the Francoist authorities and the possibilities of using them as contacts to carry out lucrative businesses were factors that facilitated their settlement in the capital," the investigation details. In this context Otto Skorzeny disembarks in Madrid, who resumes his political activities with the help of Leon Degrelle, Rexist leader. "Despite the misfortunes of the moment, I remain optimistic [...] Our time will return," he wrote at the time in a letter he sent to Daye consulted by del Hierro.

The historian from the University of Maastricht affirms that the activities carried out in Madrid during these years contributed to "keeping fascist ideology alive" and were key "when building the fundamental pillars of what we call neo-fascism". They were not massive acts or calls, but the network was international, recalls the expert, who points out that political activity was marked by the idea of ​​rethinking strategies. "Many consider that the ideology as it was proposed is no longer useful for the postwar period and they begin to think about how this fascism can be adapted to the new context," he explains.

As a symbol of the importance of the capital for the fascist universe, the investigation points to the decision of two large neo-fascist groups to open offices in Madrid: the Movimento Sociale Italiano (MSI) and the European Social Movement (EMS). Previously there had been a relevant trip, that of Oswald Mosley, founder of the British Union of Fascists, about which the British services assured that he was "trying to do everything possible to develop his contacts abroad" to form a European movement. Once he created the network of contacts in Spain, he undertook the trip "sponsored by Franco's brother-in-law Ramón Serrano Súñer". Later he participated in several congresses in Rome and Malmö, from where the EMS emerged.

At the same time, the neo-fascists residing in Madrid received the echoes of the decisions taken in the Swedish city and decided to take advantage of the momentum and organize an international meeting in September 1951 on the occasion of the anniversary of the liberation of the Alcázar of Toledo during the Civil War. The European Social Movement then decided to open a branch in the capital that would be directed by the neo-fascist Jean-Maurice Bauverd, persecuted by the Swiss authorities, to whom Otto Skorzeny provided the legal documents to cross the border and a job. Skorzeny would become one of the key figures of neo-fascism and even launched from Madrid the idea of ​​creating an army of Germans in Spain.

"The node of the neofascist network established in Madrid was becoming substantially larger, more global and more official," the study emphasizes. A relevance that grew "to the point of becoming an almost obligatory point of pilgrimage for anyone interested in neo-fascist ideology in the following decades."