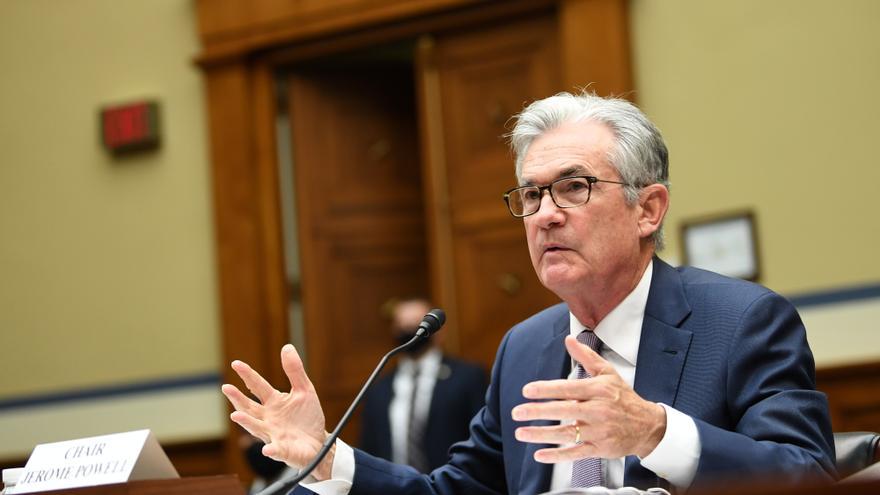 Since the effects of the pandemic began to hit the United States, the Federal Reserve (Fed), the equivalent of the European Central Bank, chose to become the assisted respiration of the country’s economy by pumping oxygen with two measures: on the one hand, keep the price of money in a range between 0 and 0.25%; on the other, buying each month 120,000 million dollars in Treasury bonds (80,000 million dollars) and assets backed by mortgages (40,000 million dollars). According to the central bank, the US economy has shown a sustained improvement over time, with a strengthening of its economic activity and employment, although inflation ended at a year-on-year rate of 5.4% in September, the highest in 13 years, which which has caused the Fed to take steps to begin withdrawing monetary stimulus (tapering) as of this November.

With this decision, taken unanimously by the 11 members of the Federal Open Markets Committee of the Federal Reserve (FOMC), the volume of monthly purchases of financial assets would be progressively reduced each month by 15,000 million dollars with the aim of ending fully with the program by mid-2022. However, the Fed said it could adjust tapering depending on “changes in the economic outlook,” but declined to elaborate on what will be the reasons that will cause the central bank to accelerate. or slow this process.

“What the Fed is doing is gradually taking its foot off the accelerator, it is not hitting the brakes yet,” Sam Stovall, director of investment strategy for CFRA Research, explained to elDiario.es. Continuing with the analogies, the expert explains that the consequences will not be seen immediately but in 12 or 18 months, since the United States economy is like “the largest cruise ship in the world”: it takes a long time to slow down or to turn. “The economy is not like a jet ski, it does not respond quickly to changes,” he stresses.

For their part, the financial markets barely noticed the announcement. On the same day, Wall Street returned to record records in its three main indicators after the Fed announcement. According to Stovall, the central bank’s strategy has been to “transmit tranquility through transparency”, something very different from what happened in 2013, when Instead of issuing small notices beforehand – as incumbent Chairman Jerome Powell has done this year – then-Fed Chairman Ben Bernanke suddenly announced that he would cut back on bond purchases, which he had been making to inject money into the economy and get it out of the collapse of the 2008 crisis. The movement sparked what the press dubbed the ‘taper tantrum’ or the markets’ tantrum, which resonated not only in the United States, but also in other countries.

“In the next three and six months I think we are going to be fine … Markets will conclude that if the Fed believes that the economy is strong enough to resist the downturn, it is also healthy enough to hold its own. own feet, “said Stovall, who said it is unlikely that a taper tantrum 2.0 is now seen.

Furthermore, the Fed leaves interest rates unchanged in the range between 0% and 0.25% and has no plans to change them. “We can be patient about interest rates,” Fed Chairman Powell told reporters.

Although Fed fund futures indicate that an increase in the interest rate could occur at the earliest in June, Stovall indicated that this increase is likely to occur in the fourth quarter. “Maybe they’ll wait until after the midterm elections (Nov. 2) so it doesn’t look like it’s a political thing.” An idea that the head of global strategy of the investment bank JP Morgan agrees with, David Kelly, who told CNBC: “What they are trying to do is mark a space between what they have done now by announcing the end of the program. (debt purchase) and when are the rates going to start to rise, because they have always said that they are two different things. “

The two key components that will make the central bank lift or press the gas pedal are: the improvement in the labor market and inflation. America’s job recovery picked up steam in October as US contractors added 531,000 new jobs in October and the unemployment rate fell to 4.6%, the lowest level since the pandemic began. In September, the Fed lowered its economic growth forecasts to 5.9% this year, compared to the 7% estimated three months ago; while it slightly raised inflation rates from 3.4% to 4.2% by the end of 2021 – its objective is to keep it at 2% -.

“Starting to withdraw their monetary stimulus is at least turning the heat down from under the pot, to make sure the Fed doesn’t contribute to inflation. Should they start raising interest rates? Yes, that would also reduce the prospects for the inflation, “Stovall added.

The withdrawal of stimulus could be accelerated if inflation turns out to be worse than expected, but that will not be clear until the second or third quarter and the Fed will give advance warning. After its meeting this week, the US central bank acknowledged that inflation is “high” and, as usual, Powell stressed that it is due to factors that are “transitory”, such as bottlenecks in supply chains global due to the effects of the pandemic and “strong demand”. “Transitory does not necessarily mean that it will last short, it means that there is an external event with an expiration date that is causing it. But we do not know exactly how long it will last,” stressed the Fed president.