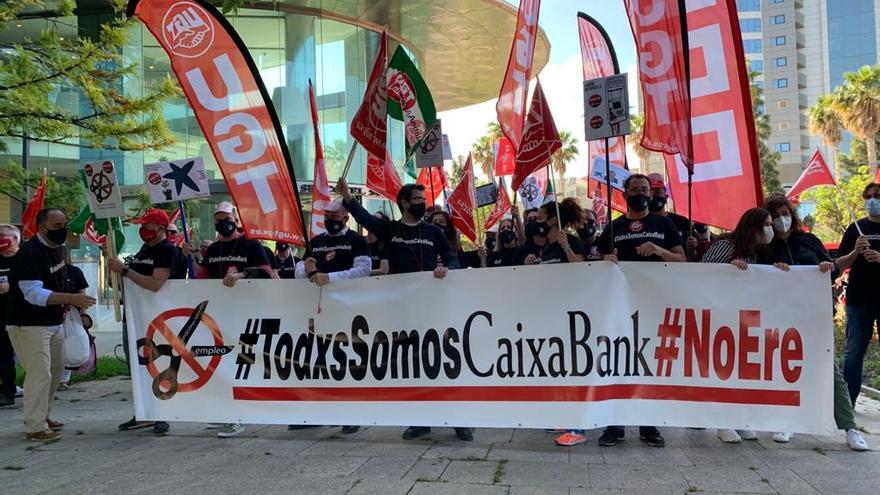 CaixaBank held its first shareholders’ meeting this Friday after the merger with Bankia. The new largest entity in Spain today gathered its investors – where the State is located – in Valencia, with the aim of approving last year’s accounts, talking about the dividend or approving the new salary scheme of the top leadership. But despite the fact that the ERE for more than 8,000 workers presented by the entity has been a secondary issue in the speeches of the president, José Ignacio Goirigolzarri, and the CEO, Gonzalo Gortázar, the unions have turned the appointment into a protest against the dismissals .

From early in the morning, representatives of workers arriving from different parts of Spain have protested at the door of the compound where the event against the bank’s leadership and the dismissal process is held, which will become the largest ERE in history of the Spanish bank. The process is still under negotiation, but the unions have totally rejected the proposed employment regulation and have been mobilizing for days against it, as has been confirmed this Friday in Valencia.

The unions have taken advantage of the question time of the shareholders’ meeting to convey to the board of directors their criticisms and the rejection of how the process is being managed, while raising the rise in the remuneration of the group’s president, Goirigolzarri. CCOO, UGT, CGT, SECB or ACAM have been just some of the trade union centrals that have made speeches at the board evidencing the rejection that exists among the workers’ representatives.

“They tell us that it is an economically round and super profitable operation and without blushing they propose a wild and brutal ERE”, said Cati Llibre, general secretary of the UGT at the bank. “They are miserable conditions that they propose to us and without voluntariness”, has pointed out during his speech in which he has asked the bank that “if it wants consensus” it begins to “listen” to the unions during the open negotiation.

Ruth Bolaños, from CCOO, has criticized the rise in the president’s salary while considering a strong adjustment. “The workforce is the one that has achieved the benefit that they present at the board today, that staff that they intend to fire,” he said. “You have done accounting magic with the merger to increase salaries again, the law allows it, but you can never justify the immorality of all this, not everything goes,” he remarked during his speech at the meeting. “Layoffs, closures, financial exclusion not only affect the workforce, it affects the entire society,” he stressed.

Goirigolzarri debuted this Friday in this context as Chairman of CaixaBank, from Bankia, where he entered in 2012 after the departure of Roodrigo Rato. During his first speech to shareholders, he momentarily addressed the ERE opened by the entity. “A merger like the one we are carrying out requires a resizing of our workforces in the short term to preserve the maximum number of jobs in a sustainable way in the future,” said the executive. “We have a clear objective of reaching agreements, and I am convinced that we are going to reach them,” he added, acknowledging that these are “delicate moments that generate uncertainty.” “We will manage the entire process from the conviction that thanks to our team we are where we are today, configuring this extraordinary platform that is CaixaBank”, he settled in this regard during the speech.

The CEO of CaixaBank, Gonzalo Gortázar, assured this Friday that in the negotiation with the unions, after the employment regulation file (ERE) raised for the dismissal of 7,791 employees, they will actively seek to reach a reasonable agreement ”that ensures the future competitiveness of the entity. “An agreement that also facilitates the relocation of people who leave the entity by giving them adequate training so that they can find new occupations,” Gortázar said.