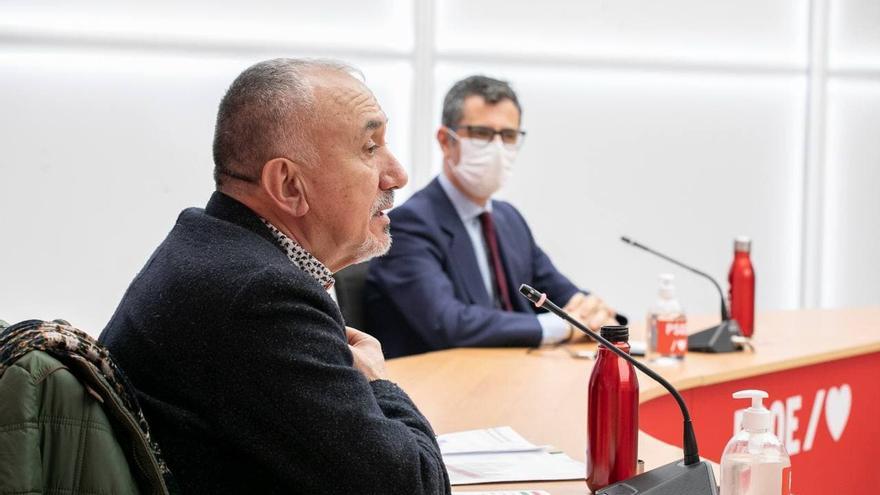 Although fifteen days in politics are a world, the pressure on the parliamentary partners of the coalition is increasing in view of the vote on the labor reform on February 3. To the resounding call from Moncloa for the usual partners of the coalition to endorse without 'buts' the decree law approved by the Council of Ministers on December 28, they have rejoined the unions majority, UGT and CCOO, which sealed that agreement with the bosses, before the threat of PNV, ERC or EH Bildu to vote against.

The leaders of the UGT and CCOO, Pepe Álvarez and Unai Sordo, respectively, participated this Thursday in an act organized by the PSOE in Ferraz in which they defended the 'benefits' of the labor reform against the forces that they consider to be unambitious. "People should be cautious when talking about this agreement," Álvarez warned at the beginning of his speech, in which he gave as an example that a Barcelona chambermaid has been paid 5,315 euros more since the decree came into force, thanks to which the sector agreement prevails over that of the company. "We have addressed three issues," explained the UGT general secretary, who referred to ultra-activity, in which "it returns to the previous norm"; the prevalence of collective agreements, in which "it almost goes back to the previous norm"; or collective bargaining: "You can see the glass half full, half empty or not see the glass, but there is a repeal of the labor reform."

Both Álvarez and Sordo assured that not everything is done in labor matters, but they opted to carry out other changes later throughout the legislature, such as compensation for dismissal, its causality or the recovery of the weight of the Administration in the authorization of the EREs. "Everything that we have agreed on at all goes against the possibility of progress in these matters. It is an agreement that it is difficult for the left to say no to. It may be that someone wants more. The truth is that I do not stop eat because you can't have dinner. It seems reasonable to me that you can climb a step, even if you can't climb the ladder," Álvarez summarized.

The general coordinator of the CCOO, for his part, defended the agreement reached within the framework of the social dialogue without this implying a "clash of legitimacies" with the Cortes Generales in the face of "frivolous" readings about the protagonism of some ministries or the interests of the Government, in response to criticism from ERC. "It's a good agreement," said Sordo, who along the same lines as Minister Félix Bolaños called on the investiture forces to "preserve the content of the agreement."

This increase in pressure from the leaders of the centrals occurs after the blow on the table given by the ERC spokesman, Gabriel Rufián, and the warnings from other government partners, such as the PNV, who remain 'no' to the labor reform, among other things because it does not include the prevalence of regional agreements over state ones that the nationalist forces are demanding and also the unions and employers in Euskadi and Catalonia. However, it is an issue that was excluded from the agreement of the social agents, in whose negotiation it was not on the table to touch severance pay, which is another of the great demands of ERC or EH Bildu.

“We ask the parties, and particularly the leftist partiesthat they think more about the possibility that millions of workers in Spain will have an indefinite contract in the next general elections”, Sordo said first thing in the morning in a veiled response to the words of Rufián, who warned the day before that " ERC does not negotiate or vote on personal projects" in reference to Vice President Yolanda Díaz.

“There are two years left in the legislature in which unquestionably labor measures can be taken, some of which, such as dismissals, the unions share the substance of the matter. What happens is that there can perfectly be two negotiation spaces”, added Sordo in a speech fully aligned with that of Díaz, whose ministry is proposing that this decree be approved under the commitment to include changes later, such as the one related to regional agreements, in the Workers' Statute. That move, however, they do not see in the PSOE, where they do not want to negotiate future conditions a priori.

"It would be a historical clumsiness," concluded the CCOO leader about the possibility that the center-right would end up appropriating the labor reform due to "the lack of vision of the parliamentary left-wing groups." That warning comes from the increasingly palpable evidence that the socialist wing of the Government looks at Ciudadanos, whose only condition is precisely that the decree law be approved as it is in exchange for his 'yes'. Government sources give up a possible understanding with EH Bildu, even if it were by means of an abstention, since they consider that he has made "impossible" demands, although they trust in "the ERC's sense of responsibility" and in attracting the PNV, whose leadership held a lunch with the socialist spokesman, Héctor Gómez. The three formations remain, at least for now, in the 'no' and from the socialist sector they warn that they cannot renounce the support of Inés Arrimadas's party.

In the midst of the buried tension in the coalition via Ciudadanos, the Minister of the Presidency, Félix Bolaños, acknowledged his desire to "widen majorities" in the country's major policies, among which the Socialists include labor legislation. "There are forces that more often and more frequently reach agreements with the government and for us these political forces (...) are priority forces in our dialogue; but in this case, in the case of the labor reform, it is a reform of State, of the country, which is good for our country”, explained Bolaños at an informative breakfast in which, in the presence of Sordo and Álvarez, among others, he once again demanded the support of all parliamentary forces, including the PP: "Unions and businessmen have been up to the task, now it's up to the political forces to be up to the task".

The PSOE does not care in this case that the labor reform goes ahead thanks to Ciudadanos and a variable geometry with small groups, as the deputy general secretary, Adriana Lastra, left black on white: “Agreements can be reached with those who think differently and are positive ”. “I would like all the groups to approve the labor reform. That is what we are working on in a coordinated manner party, government and parliamentary group. The only preference this government has is that it go ahead, ”she replied about possible alliances.

The intentions of the PSOE arouse suspicion in United We Can, which tries to prevent the labor reform, which is the cover letter of Yolanda Díaz's political project and one of the star measures of the minority partner, from remaining in the newspaper library like the one that came out thanks to the center right, an asset that forces like the ERC will take advantage of electorally. For now, the Ministry of Labor continues to trust in keeping the allies of the investiture, who are becoming more and more distant.