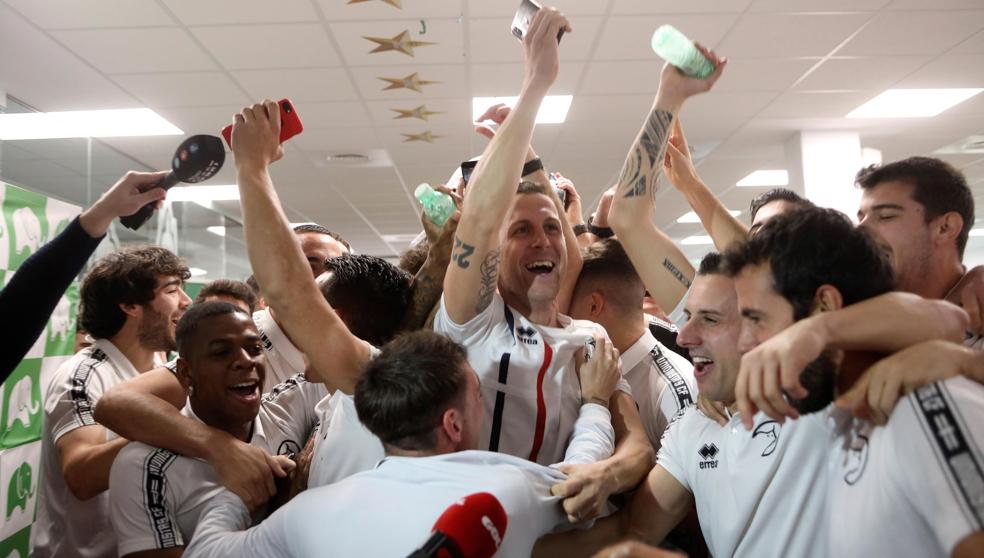 The Unionists of Salamanca CF, the youngest club of those left in the copera competition, has been one of the winners with one of the two fatsters in the draw: el Real Madrid. The other jackpot,
the Barcelona, is gone for Ibiza
. The Salamanca team lived as a party their match with the whites in the round of 16. Founded on August 26, 2013 After the disappearance on August 18 of that year of the historic UD Salamanca, the Unionists militated since the 2018-19 season in the Group II of the Second B.

The current season is not being good for the charro club. After winning only one of the first ten games on October 27, he stopped his coach, Roberto Aguirre. With his successor, Carlos Javier Luaces, he has raised the flight somewhat. He has won eleven of the last 16 points. However, the 18th, last-to-last, with 19 points and a balance of five wins, four draws and ten losses. He has scored 26 goals and received 33. To get to be round the Unionists first eliminated Atlético Baleares (1-0) and then surprisingly Deportivo. (1-1 in the match and 8-7 on penalties).

The team scorer has gone to India

The tie with Madrid comes to the Unionists when they have just lost two of their best players in this winter market. The Valencian midfielder Javier Ribelles, trained in the lower categories of Paterna, has just paid his termination clause to sign for the Nàstic de Tarragona. On Three Kings Day, Madrid striker David Grande accepted an offer to sign for an Indian Super League club, the Jamshedpur.

The Unionists have been reinforced in this winter market with four players and on their roster is José Ángel Alonso who debuted in the First Division with Elche nothing less than marking Leo Messi.


Doubts about the stage of the match

The Unionists do not want to play in the Helmántico

Today there are great doubts about where the match will be played against the Zidane team. The Unionists play in an annex to the historic Helmántico stadium, popularly known as Las Pistas, with a capacity for 4,000 spectators. It is an enclosure associated with Cuban Javier Sotomayor and the history of athletics. There the Caribbean jumper got two world high jump records. The first to cross the bar at 2.43 meters on September 8, 1988; the second, by jumping 2.45 on July 27, 1993.

The Salamanca City Council, through the mayor, Carlos García Carabayo, has offered the club to play in the Helmántico, with capacity for 17,000 spectators, but nobody in Unionistas is very much for the work. The president of the club, Miguel Ángel Sandoval, prefers to receive Madrid in Las Pistas: “We can expand the capacity to 8,000 spectators.” In the Helmántico usually plays the Salmantino, rival club of the Unionists. The two declare heirs of the extinct UD Salamanca.

Madrid has not traveled to Salamanca since 1999

Whites have not traveled to Salamanca (the land of Vicente del Bosque) for 21 years. Their last visit dates from April 25, 1999. They came with the Ferraris team and as champions of Europe (last season they had won Juventus de Zidane in Amsterdam, 1-0, with a goal from Mijatovic), but in the Helmántico they did not pass the tie (1-1).

Madrid has not won the Copa del Rey since the one lifted in 2014 in Valencia against Barcelona (2-1), remembered for Real Madrid by the goal of Bale beating Marc Bartra in the race. The Cup has been a tournament historically little valued by Madrid. His biggest disappointment to a single party came with the elimination at the hands of Toledo de Segunda B in Salto del Caballo, 2-1, on December 13, 2000.

The Salto del Caballo and the alcorconazo

The last great muggy shame of the whites was the so-called alcorconazo, in a double match eliminator. The then also of Segunda B Alcorcón defeated Manuel Pellegrini Madrid 4-0 in Santo Domingo, on October 28, 2009. Marcelo, Raúl, Guti, Benzema or Van Nisterooy lined up on that team. In the return at the Bernabeu, on November 10, the whites could only win 1-0 with a goal from Van der Vaart. Florentino Pérez would later confess that he was never ashamed in a box. Pellegrini was sentenced.

Recognition of the longest – La Provincia

Interview with Aitor Ariño before the European final: “The thing about extremes is to fly, observe and try to deceive the goalkeeper”