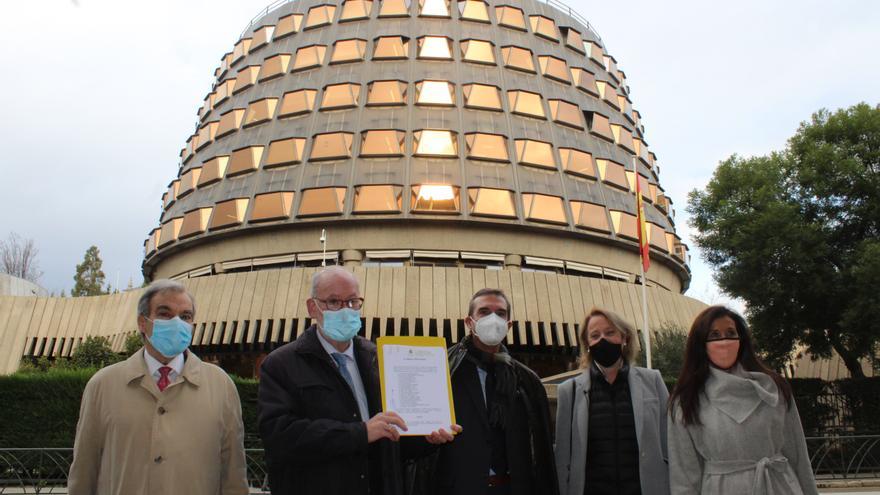 Eleven years have passed since the PP presented an appeal of unconstitutionality against the abortion law approved by the Government of José Luis Rodríguez Zapatero. A decade later – in which popular two legislatures have led the Executive — there has been no response from the Constitutional Court. Faced with this situation, a part of the most ultra-conservative sector of the right is trying to reactivate that pronouncement, as advanced this Monday The country. Over the last month there have been two movements with which it is sought that the court of guarantees takes a position before the legal argument presented by the popular in 2010. On the one hand, the ultra-conservative Christian Lawyers association announced fifteen days ago the filing of a complaint in the Supreme Court against Andrés Ollero, rapporteur for the appeal against the abortion law in the Constitutional Court, whom they accuse “of a possible crime of trespass in its malicious delay mode. ”

On the other, a score of former PP deputies have chosen to delay the response to Europe. The former Minister of Education of the Government of Esperanza Aguirre, Luis Peral; the former popular deputy and current deputy of Vox, Lourdes Méndez Monasterio and the former president of the Basque PP, José Eugenio Azpiroz, presented before the media outside the headquarters of the Constitutional Court the lawsuit directed to the European Court of Human Rights (ECHR) against the court of guarantees “for unjustified delay in passing sentence.” In the released press release they provided the names of the rest of the popular former deputies who support this action, among which the former ministers Jorge Fernández Díaz and Federico Trillo stand out, as well as the current Vox deputy, Ignacio Gil Lázaro.

This was not the first time that magistrates had been asked to take a position on abortion. In conversation with this editorial staff, Peral recalls that “on December 16 They also sent a letter “asking” to resolve the matter “and received no response. This silence has led the former popular parliamentarians to end up asking for protection in Strasbourg.

In the court both Ollero and the president, Juan José González Rivas, are concerned about the image of the Constitutional Court by not expressly resolving this appeal, they admit legal sources, which also state that this case was not resolved considering that it was tacitly withdrawn after the PP did not repeal the law when it was at the head of the Government and with an absolute majority in Congress. Even so, the magistrates of the court of guarantees cannot keep the matter in a drawer – state the sources consulted – because the deputies who presented the appeal do not want to withdraw it.

The magistrate in charge of the presentation has a marked conservative character, he was a PP deputy for 17 years, and a religious one. its anti-abortion positioning it has been evident on more than one occasion. “Five decades later, the situation is one of free abortion, as Spain has become a paradise for abortion tourism and the place where the number of abortions in the European Union grows the most,” he lamented in an article published in Medical Diary in January 2012.

The underlying problem for which this appeal has not been debated focuses on blocking the renewal of the court of guarantees, add the legal sources consulted, who argue that Ollero – with a term expired since 2019– It generates a problem of conscience facing a rejection presentation. For this reason, the decision has been delayed with the aim of assuming the appeal with a new rapporteur, given the possibility that there would be an agreement to replace the judges with a mandate that has already expired. In statements to El PaísOllero has assured that he has “prepared the necessary works” to bring the presentation on the abortion law to the plenary session as soon as necessary.

Vox has taken advantage of the presence of its deputy among the signatories of the lawsuit before the ECHR to disseminate the filing of this lawsuit on its website. “For more than ten years the Spanish Constitutional Court has refused, for unknown reasons, to pass judgment in this unconstitutionality appeal, denying the plaintiffs in practice and in an absolutely arbitrary way their right of access to justice”, states the Press release of the far-right formation published by this matter.

Before making the leap to Vox and representing the Santiago Abascal party in Murcia, one of its electoral niches, Méndez Monasterio She was a PP deputy for three legislatures, between 2004 and 2016, and Minister of Labor in the Autonomous Government of Ramón Luis Valcárcel between 2002 and 2004. Both during his years in Genoa 13 and in the formation of the extreme right, this policy has made public its position against the voluntary interruption of pregnancy, becoming one of the representatives of the PP in Congress that broke the party’s voting discipline in 2015 by failing to position itself in favor of the reform of the abortion law promoted by the Government of Mariano Rajoy. That same decision was adopted by another of the promoters of the lawsuit, José Eugenio Azpiroz.

A month ago Méndez Monasterio participated in some conferences organized under the title Assembly of Associations for Life, together with spokespersons for Catholic and ultra-conservative groups, such as Jaime Mayor Oreja, who chairs the European federation One Of Us; and representatives of the Spanish Family Forum and the Spanish Federation of Pro-Life Associations. In that talk, the Vox deputy explained what the unconstitutionality appeal presented by the extreme right formation against the euthanasia law consisted of.

In Congress, where he assumes the spokesperson of the party in the Equality Commission, Méndez Monasterio’s interpellations have not gone unnoticed, sparking controversy by refusing to keep a minute of silence by victims of sexist violence or by criticizing a non-legal proposition that intended that women who are a couple do not have to be married to register as mothers.

Together with the current Vox deputy, two former colleagues from the popular caucus went to the Constitutional Court to make public the lawsuit filed before the ECHR: Luis Peral and José Eugenio Azpiroz. The former is not one of the signatories of the appeal presented to the court because in 2010 he was a senator, although he assures elDiario.es that he was “part of the legal team that wrote” the brief. Before reaching the Upper House, Peral went through the plenary session of the Madrid City Council and the Autonomous Assembly, coming to occupy the Education portfolio in one of the autonomous governments of Esperanza Aguirre.

In 2016 he left active politics, after renouncing his act in the Madrid Assembly. During the legislature chaired by Cristina Cifuentes had several run-ins with the voting discipline of his parliamentary group. He faced a fine of 300 euros for absent from the vote on the Law against ‘LGTBphobia’, which Ayuso is now considering reforming after his agreement with Vox, and another of 600 euros for voting against a non-law proposal on the bellies of rental. After leaving the seat, he has focused on his academic career. In March, at age 70, he received his doctorate with a thesis on the economic policy of the Second Republic.

The last of the former parliamentarians who has made public his support for the lawsuit filed against the Constitutional Court is the lawyer José Eugenio Azpiroz. This lawyer also broke the voting discipline of the party. In this case, it occurred by refusing to support the reform of the abortion law promoted by Rajoy, years after the presentation of the unconstitutionality appeal. “I don’t feel ultra-conservative”, subsequently assured this drafting. Moreover, they have always said that I am a bit red on social issues, “says the PP deputy, who also defended that” killing someone is not anyone’s right. ”